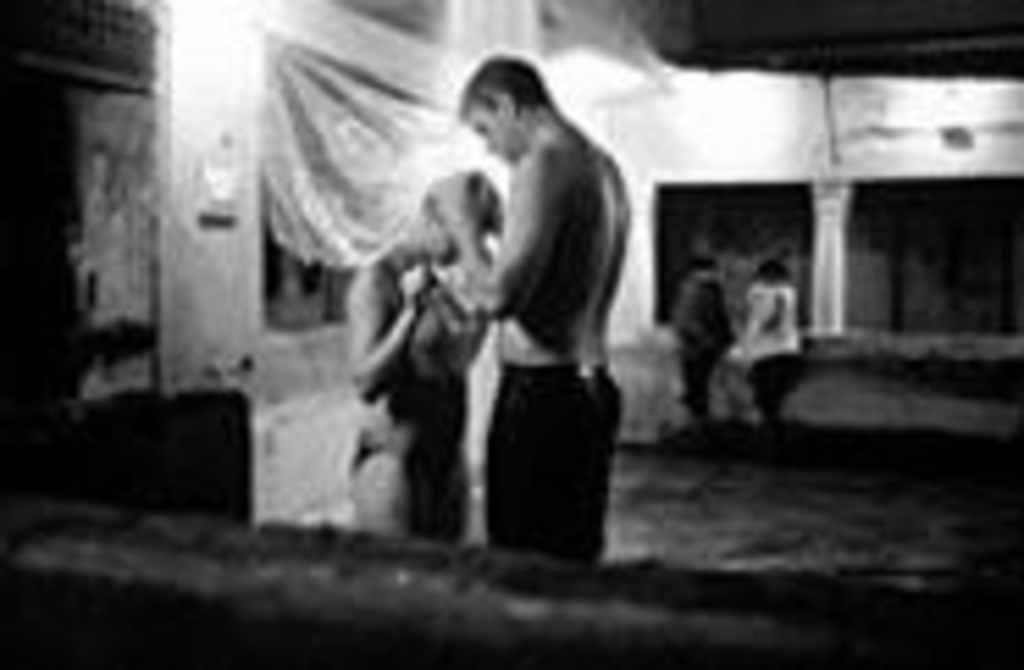 The future is almost here — at least according to screenwriter Frank Cottrell Boyce (Pandaemonium) and director Michael Winterbottom (24 Hour Party People), two cinematic visionaries whose combined vision in Code 46 sparks tremendous intrigue and unrest. At once a weirdly familiar sci-fi trip, a bleak romance, a treatise on technology run amok, and a hot sirocco of mood, it’s the successor to Blade Runner (or Orwell or Huxley) we’ve long awaited. Yet it defies simple categorization, proving itself astonishing, haunting and lyrical on its own terms.

In the film’s freaky future, people speak middling English shot through with common Spanish, French and Chinese terms. The ozone layer is so depleted that many work mainly at night. Genetic manipulation and cloning are widespread, and advanced cellular communication has replaced most intimate human contact. If you think that sounds pretty much like today, that’s definitely the point, but this forecast also includes globally warmed continents ravaged into desert wastelands, stretching seemingly forever between civilized but massively overcrowded cities accessible only to those relative few approved for passage through carefully guarded checkpoints.

Through one of these checkpoints passes William (Tim Robbins), an insurance investigator from Seattle on assignment in Shanghai. He’s searching for a counterfeiter who’s been circulating fake “papelles” (clearance papers) for travel and “cover” (insurance). Having taken an “empathy virus,” William can read minds, and in the midst of his interrogation lineup he meets our heroine and narrator, Maria (Samantha Morton). There is an immediate attraction.

Unfortunately, married man William finds Maria a bit too appealing, and in short order he has pinned the crime on someone undeserving and taken Maria out for a night on the town. When the inevitable occurs, though, we wonder if, beyond adultery, they have committed some sort of sex crime. The titular Code 46 is an ordinance that outlaws coupling between people who share forbidden levels of matching DNA. In this future, the law is scientifically enforced.

At this point, rather than creating excruciating tension, the filmmakers sustain a moody sense of paranoia and longing. Genre fans clamoring for sci-fi gunplay, rooftop chases or killer robots will miss the point, which is that the future will not blast us into hyperspace but will instead wear down our vulnerable humanity.

The film’s design adds immensely to the general unsettledness. Working wonders with cinematographers Alwin Kuchler (Winterbottom’s The Claim) and Marcel Zyskind (Winterbottom’s In This World, a major inspiration for this film), the director and his production designer, Mark Tildesley, have created a unique view of a future that’s only a few years away. Rather than building cumbersome sets, they’ve juxtaposed mismatched cityscapes and captured the dust, smog and squalor just outside their gates. The result is a little bit like Brazil or The Fifth Element, but its believability packs a major wallop.

Working in a genre riddled with clichés, Winterbottom keeps his bearings and sustains our interest in the humanity of his struggling characters. Much of this is because Robbins and Morton are at the top of their game, but screenwriter Boyce, often a collaborator of Winterbottom’s, builds his foundation upon strong characters, then proceeds to plot. Furthermore, the supporting cast, featuring Benedict Wong (Dirty Pretty Things) and Om Puri (East Is East) as reticent authority figures, provides richness around most every turn.

In the midst of all this, there’s a wonderful scene set in a karaoke bar. When the Chinese chanteuse singing in a Latin tongue steps down, none other than Mick Jones of the Clash approaches the microphone to sing the obvious but utterly welcome “Should I Stay or Should I Go.” Apart from perhaps “Stay Free” or “Innocent Child,” he couldn’t have arrived with a more appropriate song to fit the film’s themes. It’s a lovely grace note in a marvelous movie, echoing that in a mad, fast-approaching future, we’re likely to get trouble, and perhaps it may be double, so really: Should we cool it, or should we blow?