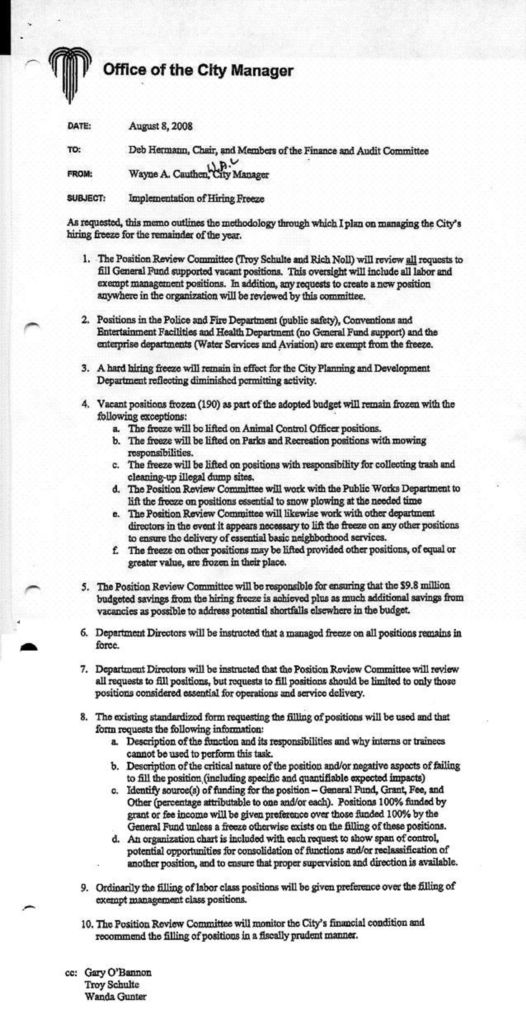 In this memo sent Friday to Deb Hermann, the chair of the Finance Committee, Cauthen said that he’s instructing department heads that a “managed” hiring freeze remains in force. Last month, Cauthen indicated his intent to lift the hiring freeze that had left 190 positions vacant. This annoyed the mayor, who sent a memo to the city manager reminding him that the council adopted a budget that froze 245 positions. “That is a policy decision we have made,” the mayor wrote.

Funkhouser and Cauthen agree that the city can’t allow cost cutting to eliminate vital services, like animal control and illegal dump clean-up. Funkhouser encouraged Cauthen to take a hard look at the city’s flabby layers of middle management. The city manager appears to have gotten the message. His memo to Hermann describes a new policy for reviewing requests to fill positions. Requests for “labor class positions,” Cauthen says, will be given preference over the requests to fill management jobs.

Good thing, too. The first ice storm of the season will be here before you know it.