From ‘squirt’ to NFL prospect 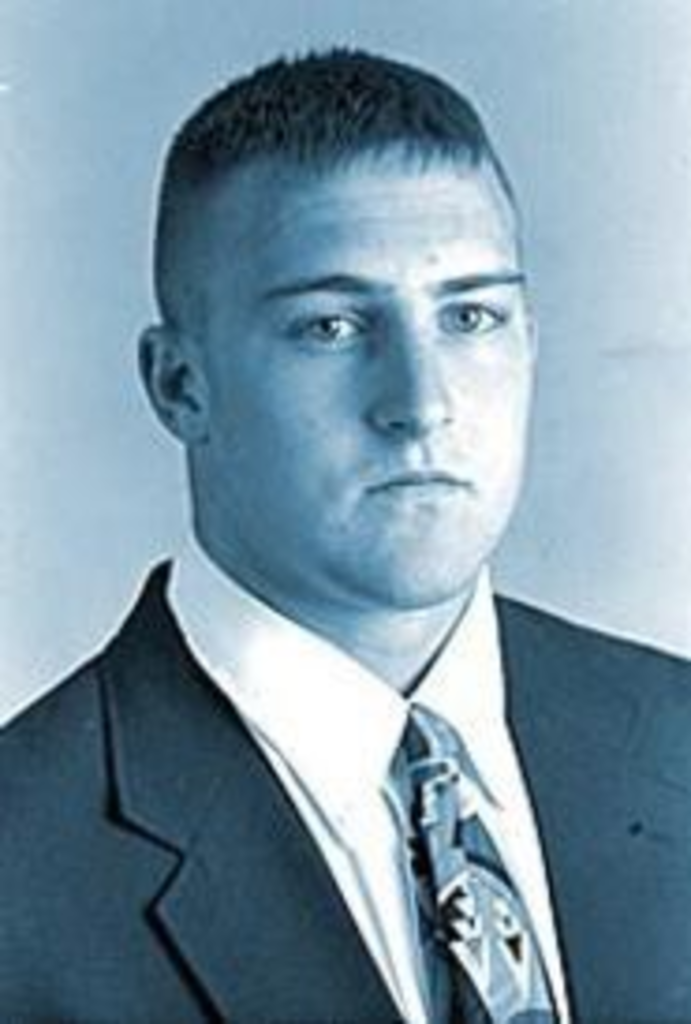 He’s no stranger to miracles. Northwest Missouri State University senior Alan Buckwalter would be wise to put down a few bucks on the lottery or try his chances in Las Vegas. Buckwalter, a defensive end for the NCAA Division II national champion Bearcats, didn’t even start in high school football until his senior year. Now he has a fighting chance to make his living as a linebacker in the NFL.

On April 28, Buckwalter will be at a Cincinnati Bengals four-day minicamp getting familiar with that team’s plays. After that, it’s back to Maryville for graduation, then to minicamp again for weight training and physical conditioning. By the time the Bengals’ preseason regular football camp opens on July 21, Buckwalter will have a pretty good idea what he’s up against to make the pros. It’s there where he’ll make the team or be cut. “I’ll try my hardest and work as hard as I can,” promises Buckwalter.

Getting to work out with the Bengals could be anticlimactic after playing in what some consider the greatest game in the history of college football. Northwest Missouri, just a few years ago a laughingstock with a 0-10 record, was fresh from a national championship season, then found itself playing for the title again this year against the Carson-Newman College Eagles from Tennessee. Down 24-7 at the half — no problem. Having to score 30 points in the fourth quarter just to get to overtime — piece of cake. Behind by 8 with 57 seconds left deep in their own territory with no timeouts? They should have been nicknamed the Bearcats the What-Me-Worries.

“They had the ball with a little over a minute left,” Buckwalter says about the Dec. 12 game the Bearcats went on to win in four overtimes. “They were in our territory and we had to stop them quick. First play, they get a first down but did it so quick they still didn’t have time to down it out. On second and three, they ran a sweep, and all they had to do was stay in bounds, but the guy got hit and went out. We got the ball, our quarterback went to work and scored, but we still had to make two points. Our coach took out our big play receivers to make the other team think we were going run, but we threw a fade to Ryan George that we call ‘the catch.’ He had real big hands and pulled it in.”

The four-overtime game, which Northwest Missouri won 58-52, set a slew of records, probably including most heart attacks induced by a football game. “In the first overtime, they fumbled and we could have won with a field goal, but we missed it. In the second one, we had the ball first and they blocked our field goal, but they shanked theirs. They scored and got a two-point conversion in the third OT, but we ran a reverse and Tony Miles scored, and ran a crossing pattern for two. Finally, in the fourth OT, we scored, but missed the two-point conversion. They got the ball and on the last play of the game, the running back tried to make extra yards and we stripped the ball away. We were so tired we couldn’t even celebrate. We were tired, hungry, and beat-up. It was a six-hour game. I think it was harder for the people watching than for us playing.”

That the Bearcats were back in championship contention was due in no small part to Buckwalter’s efforts on defense. Not many 6’2″, 242-pounders in the country have his physical skills and work ethic. Not only does he have linebacker speed, but there’s also that 40-inch vertical leap, 11-foot standing broad jump, and 450 pounds on the bench press. Called “The Freak” by Northwest defensive coordinator Scott Bostwick, Buckwalter can take over a game as he did earlier in the year in a win over Arkansas Tech. Two forced fumbles, two tackles behind the line of scrimmage, and a deflected pass just begin to tell the story of how he intimidated Tech’s offense.

Before getting a firm invitation from the Bengals, Buckwalter had calls or workouts with the Packers, the Vikings, the Raiders, and the Colts. The recruiting wasn’t expected, even after the miraculous four-overtime championship win. It was his last college effort that opened the doors.

“I had no idea I might have a chance in the NFL,” says Buckwalter. “I played in a postseason game called the Snow Bowl. I knew this would be the only chance to pursue my goal and I really had to have a good game. Well, I had the game of my life and got my foot in the door.”

“Squirt” is not the word that comes to mind when you see Buckwalter, but that’s how he refers to himself and his chances, not only of becoming an NFL player but even playing in high school or college. “I was a squirt in high school and finally got a chance to play my senior year. I had a heck of a season and got a chance to go to college. I started out as a receiver but was too big, so I got my chance on special teams, then moved to defense. My dad said it best. He thought my chances for the NFL were 1 in 100 before the Snow Bowl, but now he gives me a 1 in 2 shot. The whole thing has been a Cinderella story.”

That’s the Alan Buckwalter story: from high school hopeful to budding NFL prospect. Not bad for a squirt.