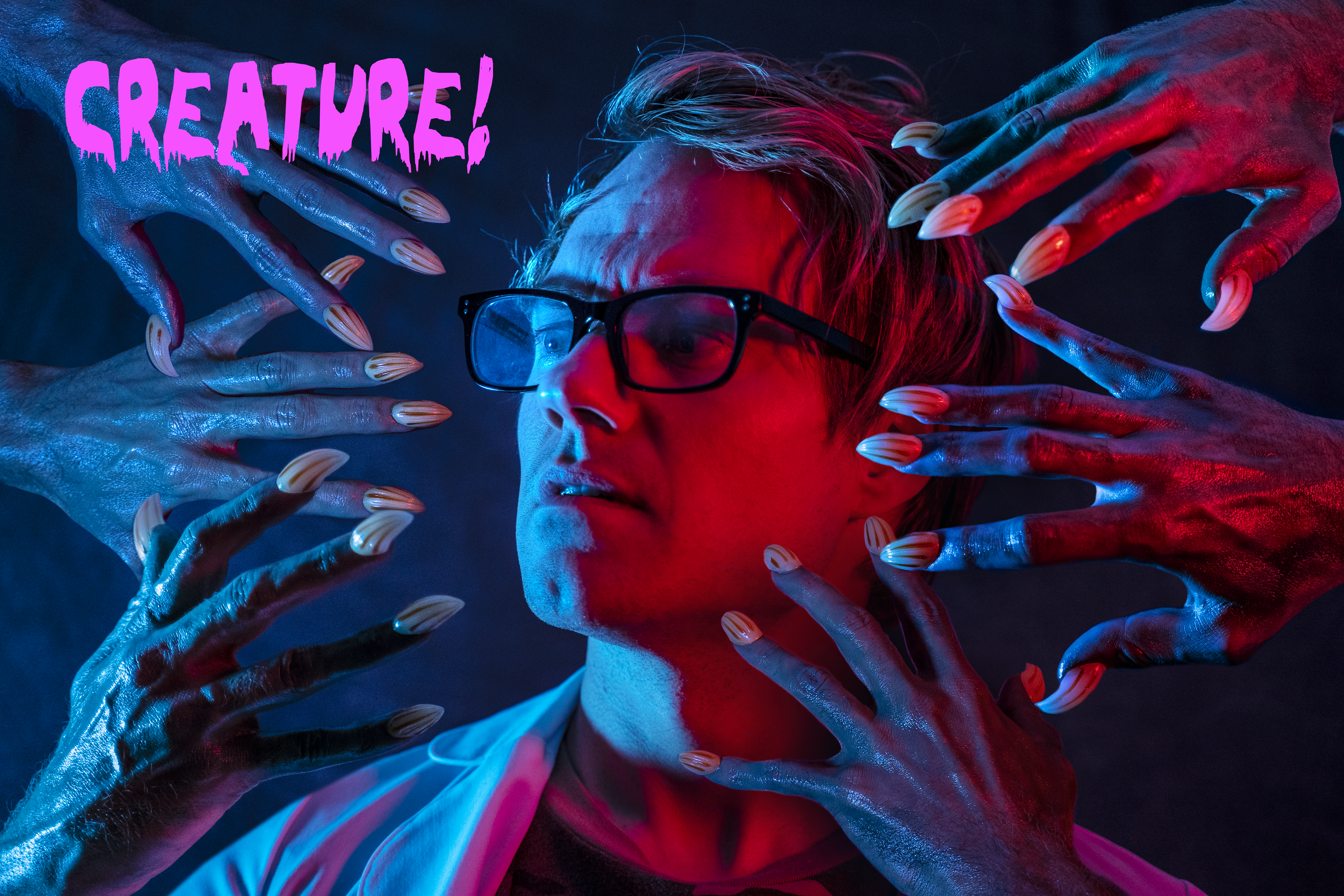 After moving to Los Angeles, Leawood native Dustin McKamie has made a name for himself in the visual effects industry, producing work on shows such as HBO’s Game of Thrones, Westworld, and AMC’S The Walking Dead. He’s also made time for his musical career, which he self-describes as “bedroom Indie rock-pop at it’s finest.”

With his first single, “Creature!” releasing today, McKamie spoke with The Pitch about how his two distinct art forms have blended in his life.

The Pitch: Was there any kind of culture shock when you first moved from the Midwest to the West Coast?

McKamie: It’s been a while since I’ve even thought about that. I think it’s a bit faster paced, and a lot more career-driven people, everybody trying to get ahead. Definitely feels a bit more like a rat race.

You’ve made a career out of being a visual effects artist. How did you get into that specific niche?

I’ve always been drawn to sci-fi films and things like that but I kind of fell into it. I initially came out to LA to pursue acting, so I started to produce my own material. Obviously being drawn to sci-fi, I was doing sci-fi driven shorts, which is like the worst idea.  I ended up putting in pretty fun effects, but I didn’t think much of it. Eventually, I started to realize that that’s an actual job, which seemed like a good alternative to what I was pursuing. Long story short, I guess I was tired of being broke. I built a demo reel and landed a studio job in LA. It’s kind of surprising.

Do you have a memorable moment or favorite visual effect that that stands out for you? A certain TV show that has a special place in your heart from your career?

I didn’t think much of it while doing it, but I worked on Star Wars Land, a projection show over in Disney World. It’s projected on the Chinese Theater and had a bunch of shots with the bad guys—Kylo Ren, Darth Maul, and Vader. They played that I think every night over there. Just the fact that people see that constantly. And then, the others are things with bigger fan bases like Game of Thrones. Working on it wasn’t a lot of fun, but after seeing the result and response from people and the same with The Walking Dead, it just made it a lot more fun to be a part of.

I would say definitely visual effects to music, especially in the producing realm, which I’ve been studying a lot more the last couple of years or year really. I didn’t realize that it’s a similar part of your brain, producing. Those programs are very similar, in a way, to effects. You’re kind of coloring the sound, using your ears instead of your eyes. I’m finding a lot of similarities in that.

On your website, you describe your sound as “bedroom indie rock-pop at its finest,” and that you are largely influenced by the Postal Service, Bleachers, and The Smiths. How’d you arrive at your unique sound?

I had some friends in college that were into that indie emo scene. This is kind of embarrassing to say, but some of that stuff holds up for sure. They introduced me to that. We’d always go to these local shows, and you pay like eight to ten dollars a ticket and they’d be the best experience. I was just really drawn to the lyric-driven music, it just spoke to me in a way that music hadn’t ever before. And I think a part of me recognized  “I really want to do that someday.” I didn’t really know how and I definitely have played music most of my life, but as far as being a lead singer, getting up in front of people like that, I hadn’t done a whole bunch at that point. That and like certain indie movies with good soundtracks definitely run into that realm.

Speaking of indie films, your song was chosen for the Blu-ray edition of Scott Pilgrim vs. the World. What was that experience like?

The contest they put on we were actually, it was a weird weird thing, cause we were runners up for it. We still won recording gear and stuff. And it was voted by the public and picked out by Edgar Wright [the film’s director] to do this video. It was a fun time.

Do you have a favorite movie soundtrack?

Initially, I think of Garden State. You see these movies sometimes where a song comes up and it’s just the perfect mashup, you know? Just kind of just resonates something inside. Juno, a lot of good indie songs on there. As of late, Drive, a thematic great with electronic style.

At this point, you’ve done shows all over the country. Do you have a standout moment from performing? A favorite show or city that you’ve played?

I was doing an East Coast tour with the band I started calling My New TV Set, which was kind of during the Scott Pilgrim era. But we stopped at a place in Philadelphia, I believe. It was just like this little pocket, this little hipster section. It was a packed house, really responsive, very supportive. And shows like that are what keep you going especially on a tour.

And have you played in KC?

I used to play over there all the time. I love The Brick, it was probably one of my favorite places to play.

You were recently selected as a winning finalist for the John Lennon Songwriting Contest. Can you tell me a little bit about the song that earned you the spot?

It was one of those first songs that came out during quarantine—a bit moody, somewhat depressed. But I’ve always liked songs that have kind of like a happy sound but the lyrics are a bit depressing or sad. That was kind of the idea, to bring that into the chorus, but didn’t want to bum everybody out. I was feeling kind of defeated by the music industry. So I threw those out as kind of like a hail mary pass, let’s see what happens. It might have been three months after I sent that out and kind of forgot about it, I got an email: you’re winning finalist. I was like, “What?”

You’ve just released your first single “Creature”. Can you tell me about its production and your influences in creating the song?

I just got a new Moog synthesizer, And I’ve never really played with anything like that. And the sounds are just—I would say mind-blowing, but what’s the word? Yeah, we’ll go with mind-blowing. I was having so much fun playing with it and then all of a sudden decided to kind of structure it into a song and it was the first one that popped out on that synthesizer. Definitely the Drive soundtrack vibe with Postal Service. I always loved Postal Service. Like, I’m so confused why there are not more bands like the Postal Service. I remember seeing them live in Kansas City, actually. Might have been the Uptown Theater. And it was so bizarre cause he was like, “Hey, you know, Death Cab for Cutie is my main.” This was Ben Gibberd talking. He’s like, “You know, I’ve always felt like Postal Service was a side job or a temp job.” I was like a temp? This was your side job, that’s incredible man! I’m so confused why there’s not more music like that. And there were a couple of bands that popped up, I think Owl City had a similar sound. Other than that, it was like crickets from my perspective.

So you were inspired by them in the sound behind the song, was there a specific experience or individual that inspired the lyrics?

Did you choose Halloween because it seemed like a fitting time to release it with the song’s “creature” theme?

I wasn’t actually thinking about that at all. The song came out and then it was almost Halloween time. I had a couple in the can and I’m hoping to release another in the next month or whatever, but it just kind of, timed up, and I figured if anything, I should push this one now since it’s coming up on the holiday.

What are your plans for the future? When will you be releasing more music?

I’m developing an EP right now. It’s all kind of on that ghost, creature type theme. But I have plans to release another one, probably in December. I’m just kind of waiting. I’m working with some promotional companies to see how creature does I have it on a non-commercial promotion and Spotify promotion and stuff. So I’m going to see how it plays out and how long the lifetime of it is depending on when I release something else. But I had always heard it’s good to have a few ready to go just so you don’t, you know, put something out, and then it dies and kind of the excitement dies off.