From Boiler to Brewpub 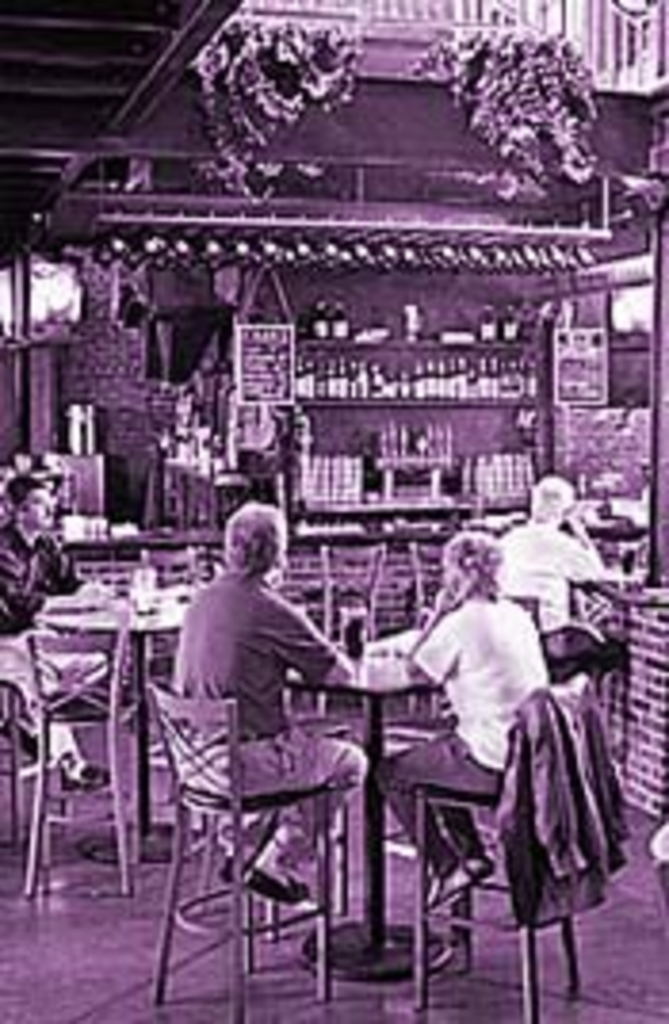 In Hometown Beer: A History of Kansas City’s Breweries, a wonderful photograph of a 19th-century Kansas City saloon shows nine tough-looking men, all wearing jackets, hats, and ties, leaning up against a bar and staring unsmilingly at the photographer. The tavern is a strictly no-nonsense drinking joint with a dirty, wooden floor (a big dog lies right in the middle); a glass case crammed with cigar boxes; and a wet patch near the bar rail, where one of the customers has just spit out a gob of chewing tobacco.

Compare that image to the clean, cool look of the Power Plant Restaurant and Brewery (2 Main St., Parkville, Mo.), which once was a coal-burning utility plant. A Kewanee Firebox Boiler, the last massive component of the building’s steel furnaces that’s bigger than a cement mixer, now sports beer spigots and a wraparound bar. No one would be caught dead spitting on this spotless floor.

Brewpubs like the Power Plant are the logical descendants of the beer gardens that early local beer-makers, such as the long-defunct Ferd Heim Brewery (the developers of Electric Park), created as places to sell their brew. As we entered the Power Plant we passed a glassed-in mini-brewery and a couple of dining rooms, all with concrete floors and exposed brick walls, eventually finding tables where diners can sip cold glasses of pale ale and stout while reading about the brewing process in “From Grain to Glass” on the back of the plastic-covered menu.

On the front of the menu, we found the kind of hearty Midwestern dishes one associates with traditional tavern fare (prime rib, chops, steaks, roasted chicken), but the food is far better than you’ll find at the nearest ersatz, corporate-operated “neighborhood grill.” In fact, the food may come as a surprise to those who stumble in expecting a selection of burgers, onion rings, and taco salads. In this restaurant’s kitchen, some creative culinary ideas have been brewing right in time with the vats of unfiltered wheat and the Southbound Nut Brown on the other side of the building.

As an example, the restaurant’s only chicken entree, Roasted Lemon Chicken ($14.95), is stuffed with garlic and lemon, roasted, then splashed with a tangy-sweet reduction of Madeira wine. Served on a bed of garlic mashed potatoes (it sounds like a garlic overdose, but chef Jason Lofton cooks with a tastefully discreet touch), it’s a blend of sweet, salty, and sour tastes embedded in juicy, tender chicken.

There’s barely one familiar dish here that hasn’t been tweaked with some unusual style or flavor. Even the lowly plate of nachos ($7.95) isn’t merely a plate but a mountain of toasty corn chips laden with black beans, guacamole, olives, and peppers and drenched in a cheese sauce liberally flavored with the brewery’s own wheat ale. An appetizer of fried catfish bits is served up with a vibrant green chile tartar sauce.

Okay, call it the gourmet version of a modern brewpub. But the chef’s innovations haven’t scared off the customers. In fact, during one recent weeknight dinner rush, the Power Plant’s nonsmoking dining room (in what was once, the server said, the coal bin) was filled with young families. At one nearby table, two toddlers gobbled down most of their parents’ spinach-artichoke dip ( $6.95), and at another, a trio of adolescents scrambled for the last wedge of a pizza laden with spinach, artichoke cream, and grilled shrimp ($7.95).

The highlight for the younger diners (and for myself, I confess) was when a train roared by the building, so close that the solid brick structure faintly vibrated and the train whistle’s scream drowned out, for a minute, all conversation. For the kids, the passing train was an unexpected novelty, but it’s also part of the Power Plant’s charm. The walls of the dining rooms are decorated with framed prints of 19th-century train engines, and at least one of the featured beers, the Southbound Nut Brown, is a liquid tribute to the trains that have passed by this building for nearly a century.

When the facility first opened as the Park College Power Plant in 1918, five Kansas City breweries — big operations, such as the Muehlebach Brewery and the Imperial Brewing Company — bottled thousands of bottles of local beer in that last gasp of good cheer before Prohibition. Today, throwing back a swallow of cool, unfiltered beer in the Power Plant’s dining room, one has a hard time imagining that more than 80 years ago, the Volstead Act made the beverage an illegal substance.

I wondered whether the same fate would befall cigarette smoking, as I watched several diners get up from their tables in the nonsmoking dining room and cross over to the open bar area, only a few feet away, to light up. Wafting in the direction of our table, the fragrance of burning tobacco didn’t bother me, but it infuriated my dining companion.

His mood was relieved, luckily, by the arrival of a sampler of the brewpub’s featured creations: a wooden lazy Susan sporting six 5-ounce glasses of beer, including the Walnut Creek Wheat (a light and refreshing brew that proved to be the best of the lot), Colonel Park’s Pale Ale, the Southbound Nut Ale, the solidly robust Steamboat Stout, a very hearty Black and Tan, and a Scottish Ale.

This intoxicating sampler of beers begs for either a salty or vinegary accompaniment of some kind, such as the appetizer menu’s warm baked pretzels, served with a mustard blended with the Brown Ale ($4.95) or hot goat-cheese-stuffed mushrooms in a piquant balsamic vinegar sauce ($7.95).

There’s also a fine cold weather choice: an oversize cup of comforting Steak-n-Barley Soup ($3.95), made with chunks of steak, pearled barley, peppers, carrots, and celery. I made the mistake of ordering this filling dish before dinner, not realizing that with a small salad and bread, the soup is a solid meal in its own right.

The minute the appetizer plates were lifted, our server raced to the table bearing a tiny cutting board and a miniature loaf of warm bread. The bread went well with the salads, which are served a la carte but are generously outfitted with giant baked croutons and house-made dressings.

Like that of any good tavern, the dinner menu has a couple of grilled sandwiches in addition to its higher-price offerings. The Black-n-Tan Reuben ($7.95), served on marbled rye, has enough pastrami, cheese, and sauerkraut to appease any delicatessen regular and can be served with french fries or a twice-baked potato, which is decadently piled with cheese and sour cream.

The five steak offerings include a 9-ounce filet mignon dressed up with a dollop of crabmeat and hollandaise sauce ($21.95), two cuts of smoked prime rib ($14.95 and $16.95), and a mustard-marinated London Broil ($13.95). There’s also the deceptively simple Brewmaster’s Choice ($12.95), a 10-ounce, center-cut grilled sirloin that was so tender, smoky, and juicy, it showed up the more flamboyant steak au poivre ($18.95), drenched in a coy peppercorn sauce.

Although this very Midwestern restaurant’s dining rooms (and an upstairs mezzanine), with their tables cloaked in white linen and a sheath of white butcher paper, bear no resemblance to a cozy British pub of any kind, a couple of traditional English-styled offerings are on the menu and are made for devouring with a pint of dark stout: Bangers and Mash (beer-marinated bratwurst with garlic mashed potatoes and sweet red cabbage; $8.95) and fish and chips (fried cod drenched in a Walnut Ale batter; $8.95). Nothing’s wrong with this working-class Brit fare, but Lofton’s all-American fare is what shows off the chef’s skills.

The youthful servers, probably culled from the nearby college, are good-natured and attentive as they dash across the concrete floor, their arms balancing heavy white china plates loaded with food. On one visit, our server beamed as she rattled off the dessert selections, which included, she said breathlessly, “for the very first time, chocolate mousse.” She added conspiratorially, “I don’t know if we’ll ever have it again.”

Before I could ask whether the mousse was made with Steamboat Stout or a splash of pale ale, my friend Bob, his eyes glazed over by the very concept of the dessert (“It’s very hard to find a restaurant that serves it anymore,” he sighed), demanded the mousse, and then the server was off to retrieve it. She returned with a wineglass filled with a runny concoction that looked and tasted like boring, ordinary chocolate pudding.

My vote would be for a prohibition on that dessert as the proper finale for the Power Plant Brewery’s spirited cuisine. The beer isn’t the only thing the brewpub serves up that’s causing a buzz.