Fringe offers samples to every taste 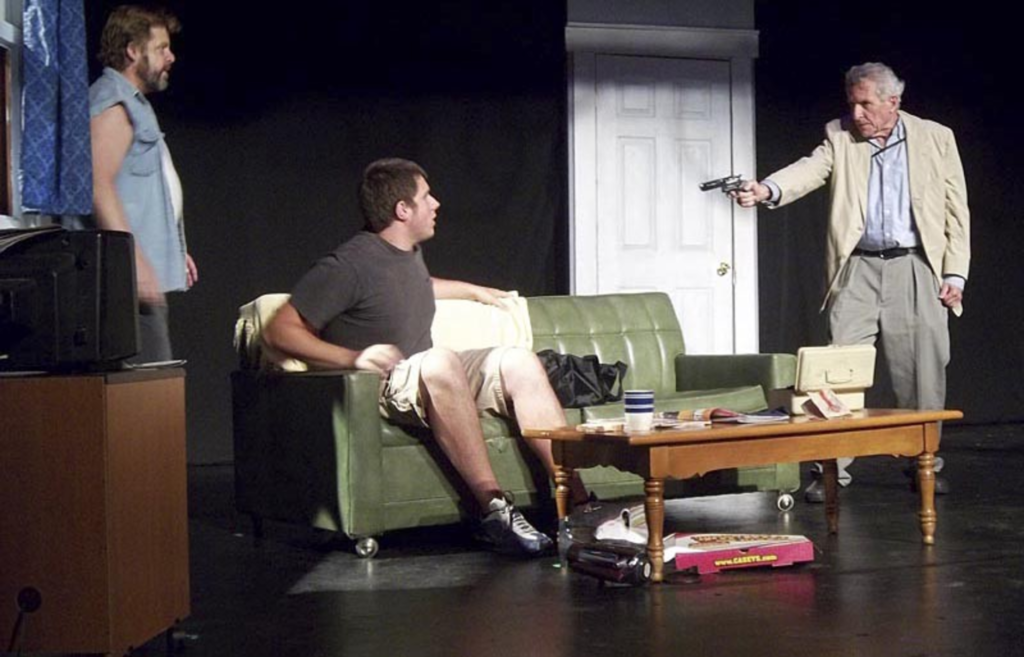 Fringe is all about low-stakes experimentation. It lets performer and audience take risks together. So I was prepared for hits and misses. But my weekend turned out tastier than I expected. Of the six local shows I attended, five were enjoyable, and four were solid hits.

As blustering, bullying good-old-boy Earl, Scott Cordes delivers a fully imagined and carefully detailed character with casual ease. Cheryl Weaver is very good as Deena, that woman we wonder about in the news: strong, smart, hardworking, but shacked up with a lout. Weaver and Cordes create a believable relationship that helps us understand the complexities of Deena’s position.

UMKC student Matthew Melson hits just the right note as slow, gentle Caldwell, who may be the only clear-eyed person in his world. Richard Alan Nichols is Jimbo, the nice old man who takes Fox News seriously and is ready to make himself an instrument of God’s righteous judgment. It’s easy to caricature the poor and ignorant, especially when we find them frightening. This play has fun with Earl and Jimbo’s hypocrisies, but it gives the characters dignity as it makes them specific and brings them to frustrated, raging life.

In perhaps the strangest style collision at Fringe, Stephanie Roberts’ one-woman, 13-character show, Mask of the Broken Heart, spins an old-time Kansas City mystery using the exaggerated masks of commedia dell’arte and the hard-boiled language of Raymond Chandler. Sliding seamlessly from role to role, Roberts embodies a full roster of eccentric characters and vivid cinematic moments, juiced up by noir’s stinging cocktail of suspense, macabre humor and a ridiculously serpentine plot. Roberts kills with her deliciously silly and simile-studded script, recited in a gumshoe’s just-the-facts-ma’am deadpan. As she perambulates around the awkward column in the Fishtank’s stage area, she instantly transforms herself with just a change of mask and a readjustment of her scarf. Her piece is an unqualified success and a must-see.

The Rocky and Bullwinkle Horror Picture Show: A Musical Parody at Off Center Theatre is the latest extravaganza of Steve Eubank’s Egads Theatre and another clever mash-up. Even for those of us relatively unversed in the Rocky and Bullwinkle universe, it’s readily explicable. And judging by the uncontrollable guffaws of the gigantic older gentlemen on either side of me, it’s a gold mine of glorious nostalgia for those who grew up with the show.

The story — what there is of it — roughly follows the outlines of The Rocky Horror Picture Show, but never mind about that. Mostly, there are funny characters and plenty of song-and-dance numbers. Eubank directs with his usual can’t-stop, won’t-stop mania, and his high-energy cast does him proud.

Doogin Brown is affable as Bullwinklishly innocent Cowpatty Minors (character names have been mashed to protect the copyrighted), but the real stars are the singers and dancers, and they sell the show. Rachel Pallante, Noah Whitmore, Katie Kalahurka, Dan Hillaker and Sam Wright are fabulously talented, and all sparkle — no, blare — with comic energy. Aurelie Roque is a perfectly cast Dementia (Natasha Fatale + Magenta), and Eubank is a show unto himself, with his choirboy face and fishnet tights and 5-Hour Energy crrrrraziness. Thank goodness for the occasional metacritical relief of Bill Pelletier’s hilariously smug, scolding, booming-voiced Narrator.

Nearly as silly and even more meta is the stylish Film Classics Presents: Heaven So Far by writer and director Kevin King, a kind of Mystery Science Theater 3000 as called to order by Robert Osborne of Turner Classic Movies. The time is the picket-fence 1950s. Stefanie Stevens is sweet, sexually frustrated suburban housewife Victoria Perkins, who tries to find fulfillment in volunteer work and Tupperware parties. Jeff Smith is hysterical as her devoted husband, the homo-yearning hunk Mortimer, who wants to talk Tupperware and read romance novels, too. Becca Scott scores laughs as Victoria’s bitchy, chain-smoking, gin-swilling, extremely pregnant best friend, Madge. And Francisco “Pancho Villegas” Javier is the object of everyone’s desire as sexy Mexican handyman Manuel.

The puns are obvious (Victoria’s obsession with the beaver in the local park, the way Manuel can really trim a bush), ditto the visual jokes (Mortimer and Manuel admiring, stroking and crossing each other’s fishing rods). But like that famous Tupperware, the performances keep it fresh and crisp.

De De DeVille is our elegant host, who breaks in with sponsor commercials, dishy gossip and arch commentary. I’m not generally a fan of framing devices, but DeVille is a master of timing and delivery, and her interruptions make this funny show even funnier, especially as she gets drunker.

Bryan Moses is in love with the grand romantic gesture and infatuated with kookiness, extremes and flights of linguistic fancy. He has steeped himself in the overheated broth of his favorite plays and has done an excellent job of turning out a near likeness in his playwriting debut, This. We once again have the eccentric male loner driven nearly insane with self-­regard and the strangely compliant female object of his
attention. It’s a fantasy of this vs. that, us vs. them, a manifesto against the quotidian.

Tyson Schroeder is Ethan, an overly intense guy waiting on a park bench for the right woman to come along, so he can spend the rest of his life with her, starting right now. Andrea Geurtsen is his hapless target, inexplicably suck(er)ed into conversation with the clearly emotionally off-kilter fellow. This play suffers from the classic Madonna-whore dichotomy. In this case, the woman is expected to smile indulgently for 20 minutes while an unbalanced stranger makes demands of her, remembering to say thank you at the end, or she’s a bitch.

Although This clocks in at barely a half-hour, it feels protracted, little more than a promising first scene that Moses doesn’t want to let go of and can’t figure out how to end. Moses has big ambition and feeling. He also has talent and commitment. This is well-written and, in places, beautiful. But it remains to be seen if he can write what happens after the opening scene, with a woman who has more going on than getting an ice-cream cone, who has opinions and plans and delusions of her own, who is on her way to her job or her husband or her AA meeting. Someone who gets to act and talk like a real person, not just the female receptacle of a man’s grandiloquent fantasies.

Hexing Hitler, by Bryan Colley and Tara Varney, is an indigestible mess: no story, no point, no characters, no relationship dynamics among the characters, horrible direction and bad rhythm. The title, however, has possibilities.