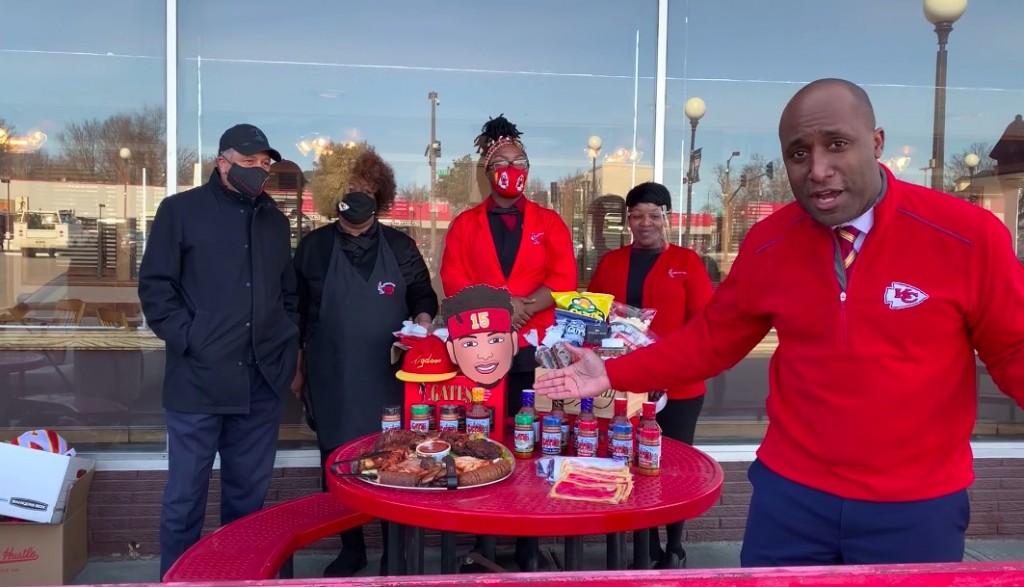 Mayor Lucas made yet another sports wager today, this time against Buffalo Mayor Byron W. Brown. Buffalo will feed healthcare workers at Swope Health Services wings from Manna @ Northland and food from Doc Sullivan’s for a day if the Bills lose. Lucas, like the rest of Kansas City, expects to get those wings to our healthcare workers after a Chiefs win. However, should the Chiefs lose, Mayor Lucas offered up a handsome prize to Buffalo.

Hey @MayorByronBrown, how about a friendly wager?

WHEN #ChiefsKingdom wins, we look forward to our heroes at @SwopeHealth enjoying your famous wings. pic.twitter.com/8Cd1XQTXW0

If the Chiefs lose, Mayor Lucas will give Buffalo healthcare workers Gates Barbecue for a day. As well, Kansas City will give KC Monarchs memorabilia from the Negro Leagues Baseball Museum, Made in KC snacks and Chiefs gear from the store, 100 Charlie Hustle KC Masks to the National Guard members who are helping with vaccinations in New York, and wings from Taps on Main.

“Hopefully, we’re not sending y’all anything,” Lucas said. “But if we do, these are the good people who will help me produce it. More than anything good luck to your team and good luck to the people of Buffalo.”

Mayor Lucas has made many wagers with other mayors during important games throughout the years. However, Kansas City has won every time.

“I have never had to pay off on a bet. We have a record to keep up,” Lucas said to KMBC 9 News during a press conference.

This AFC Championship game is an important time for some sweet revenge, Lucas noted.

“You’ll remember that we played in the AFC championship game after the ’93 season in 1994 against the Bills,” Lucas said. “I was this young, excited football fan and I remember just thinking we would win and go to the Super Bowl. The Bills didn’t need to go to their fourth Super Bowl and lose. But the Bills had our number that day, so I look forward to getting that level of revenge some [27] years later.”

Other businesses have gotten in on placing wagers on the outcome of the game. Two popular bars in the Northland, Riverpark Pub and Eatery and Al’s Bar and Grill have made their own bet. Al Burns, the owner of Al’s is from Buffalo and serves up authentic Buffalo wings in his bar. The owner at Riverpark has offered to dress up in all Bills gear and work at Al’s on Super Bowl Sunday if the Chiefs lose. If the Chiefs win, Al will dress up in all Chiefs gear and work at Riverpark Feb. 7.

Another war is being fought over Kansas City barbecue sauce… sort of. After a popular radio show on WGRF-FM in Buffalo has convinced a local grocery store to take KC Masterpiece barbecue sauce off the shelves until after the AFC game.

However, the move led to a lot of attention, including from the KC Masterpiece brand themselves. The brand joined in on the Sauce War of 2021 by doing good for both communities. The company will be donating both $5,000 and 5,000 bottles of KC Masterpiece sauce to FeedMore WNY in Buffalo and Harvester’s in Kansas City.

“When we heard the hilarious news of our sauces being removed from store shelves in Buffalo, albeit temporarily, we saw a great opportunity to serve both communities while encouraging football fans to do the same,” said Peddy Khatami, Director of Sales Planning for KC Masterpiece. “We’re excited that our sauce is a strong symbol of its namesake city during the lead up to the big game, and even more excited to rally fans from both cities to join us in paying it forward.”

Drew Cerza, the Wing King of Buffalo wanted to join KC Masterpiece in the good work they’re doing. Although he’s a Bills fan, Cerza uses KC Masterpiece in his Buffalo wing recipe. Cerza started a GoFundMe, and fans of both teams are encouraged to donate to the cause. All proceeds will be split between the two food banks that KC Masterpiece is supporting. As of publishing, the GoFundMe has already raised $10,540 of its $100,000 goal.

While these wagers may be fun, we, like Lucas, fully expect the Chiefs to come out on top this Sunday. And when they do, we will be getting a lot of rewards from our friends in Buffalo.