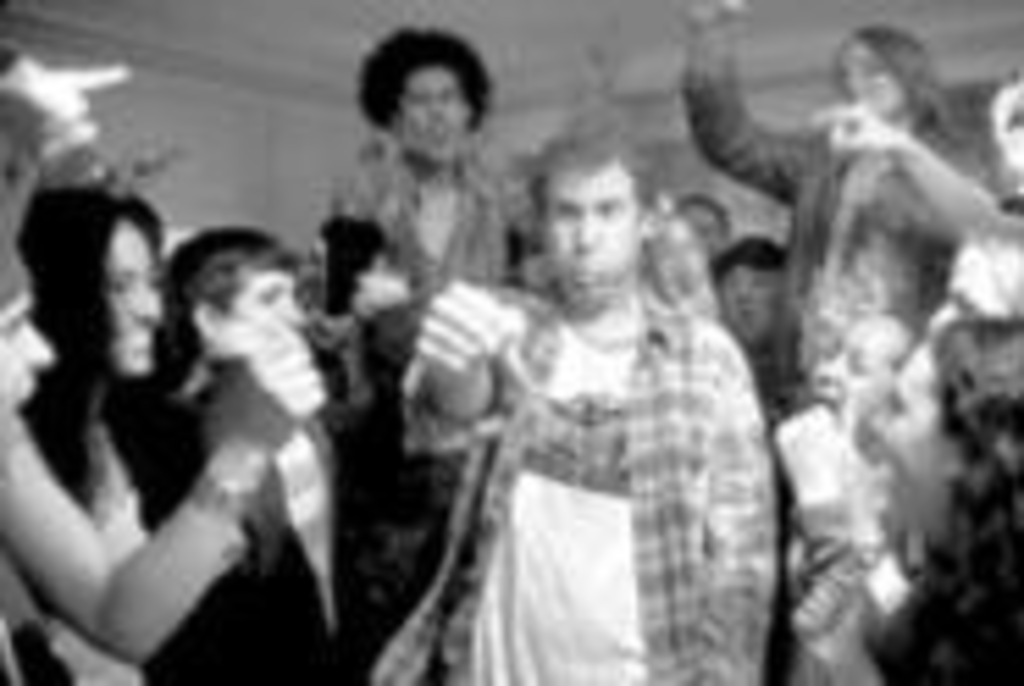 Even when people were watching Will Ferrell on television every Saturday night, they weren’t seeing Will Ferrell. They saw no more than a glimpse of him, beneath wigs and behind glued-on beards and buried under characters who became almost better known than he during his seven years on Saturday Night Live. There were, among so many, cheerleader Craig, the Spartan with too much pep; Marty Culp, the piano-playing half of the overwrought husband-wife performing duo; Janet Reno, hosting her regular dance party; Roger, the hirsute professor with a luv-uh named Virginia; James Lipton, who buries himself hip-deep in movie-star ass; and George W. Bush, a president whose foreign policy consists of repeating, “Don’t mess with Texas.”

Then there were the movies, in which he was asked to do the wacky and the oddball, paid to play garish and surreal—Mustafa in the Austin Powers series, Mugatu in Zoolander, Sky Corrigan in Superstar and Lance DeLune in The Ladies Man, the latter two based on SNL shorts stretched till they snapped. For a while, it appeared as though he was becoming another Phil Hartman, a sketch actor who disappears within a character and comes out the other side a blank—all mannerisms, with no sense of the man within. The same thing used to happen to Peter Sellers, a sieve in need of constant replenishing by writers and directors. Some actors are just like that, which is why they go into the make-believe business. They’re the flesh-and-blood equivalents of Mad-Libs, nothing without someone else filling in the spaces between.

Then came Old School, released this year during the February wasteland in which studios bury product they never expect to hear from again. It was the story of three men in their 30s, played by 36-year-old Ferrell, 33-year-old Luke Wilson and 34-year-old Vince Vaughn, who couldn’t bring themselves to leave behind their single, drinky days; they made their own fraternity, abandoned their wives and shirked their responsibilities. The movie, made for $24 million, made three times that during its theatrical run and has become a DVD staple—this generation’s Animal House or Caddyshack, something to be memorized like sacred text.

Director Todd Phillips cast Ferrell as newlywed Frank Ricard, the once-and-future “Frank the Tank.” At film’s beginning, Frank’s getting married and settling down (“with one vagina for the rest of your life,” chides Vaughn’s Beanie). His has become a life of Saturdays spent at Home Depot and Bed, Bath & Beyond if the schedule allows, which is no life at all; Frank is happier taking the restrictor plate off the Red Dragon, guzzling from a beer bong and streaking down Main Street with an invisible posse in tow. He has now become a role model to every man in his 30s who believed life would be an endless series of binges and hangovers, only to discover a desk full of bills and a wife who wants the lawn mowed this weekend.

So it is amazing to discover that there were some higher-ups at DreamWorks SKG, which released the film, who did not want Will Ferrell cast in Old School. They did not think him appropriate for the part of an Everyman fighting the onset of responsibility and age. They saw him in wigs and costume, not in the nude—Will and his willy.

“I heard in hindsight that there were a few people at the studio going, ‘Will Ferrell? I don’t see it. I don’t get it,'” Ferrell says. “My agent won’t tell me the names, but later I guess they were like, ‘You were right. We were wrong.’ And it was all Todd Phillips’ doing. He literally said to me, ‘This guy’s going to do crazy stuff, but he’s going to be the closest thing to just you, Will, that we’ve gotten to see.’ And I thought that was a great point. I don’t know. I guess those people are getting more and more educated, but for the most part, I still don’t know if people really understand what it is, the thing that I can kind of do. And I don’t know if I can even articulate it. I don’t know. I just kind of go out there.”

This week, Ferrell arrives in theaters carrying his first movie—over his shoulder, Santa-style. In Jon Favreau’s Elf, he plays Buddy, a human raised in the North Pole who doesn’t realize he’s a giant among elves; his adopted father, played by Bob Newhart, has to set him straight and explain to him his real father lives in Manhattan and knows nothing of his existence. The film is quintessential holiday fare, as Buddy treks to New York City, gets a job as a department-store elf, falls in love with a pretty co-worker (played by Zooey Deschanel), meets his real dad (James Caan) and pretty much saves Christmas by reminding a cynical town about The True Meaning of Christmas. If Tim Allen’s Santa Clause can become a Christmastime standard, there’s no reason to doubt Elf will be a constant in the DVD player each December in years to come.

Elf works only because of Ferrell, because his Buddy is endearing without becoming cloying, screwball without turning screw-up. He’s a child trapped inside adult-sized green tights and reminiscent most of all of Tom Hanks in Big—the good-natured naïf who doesn’t understand grown-up things like cynicism and suspicion. Frankly, it could have come off as a little disturbing—especially when Ferrell sneaks into the department store women’s bathroom while Deschanel’s singing in the shower, or when he engages Caan in a “tickle fight”—but because Ferrell plays Buddy so wide-eyed and innocent, so absolutely lovable, the movie works.

“It’s funny that you mention Big, because in talking with Favreau about the movie, that’s kind of what we were shooting for,” Ferrell says. “I’m not saying that it’s as good a movie as Big, but that’s what we were shooting for, that kind of tone. That movie is artfully done in the way that it is comedic and dramatic all at the same time. I was always worried that the bathroom scene with Zooey would come off as creepy guy in an elf suit going into the women’s bathroom. But I’ve got to hand it to Favreau, because he was like, ‘No, no, it works, because you just see that he just innocently heard this voice and doesn’t really even realize where he is.’ It’s a good motto for life. Remember, creep factor can end up being sweet and innocent.”

When Ferrell left Saturday Night Live at the end of SNL‘s 27th season, he received a hero’s send-off—an unprecedented adios for a show that has watched some of its most beloved alumni leave without so much as a handshake or a “Screw you.” Usually, a cast member just vanishes into a series of bad movies, or an entire ensemble is executed en masse; one minute he’s Chevy Chase and you’re not, and the next even he’s no longer Chevy Chase. Over the years, producer Lorne Michaels has become particularly adept at firing even the most favorite of sons, among them Adam Sandler and Chris Farley, who were let go at the insistence of NBC higher-ups.

But Ferrell had become so beloved that his departure on May 18, 2002, became a giddy send-off. Alex Trebek appeared during Ferrell’s last stint hosting Celebrity Jeopardy, and Neil Diamond joined him at the end of Weekend Update, where they performed a terribly uncomfortable duet—absurd parody and actual performer, side by side à la John Belushi and Joe Cocker 25 years earlier. This, despite the fact Ferrell had, four years earlier, appeared in a VH1 Storytellers sketch in which his Neil Diamond introduced the song “America” by explaining that “my love of this great and beautiful nation and my hatred of all people with dark skin led me to write this.”

In Tom Shales and James Andrew Miller’s Live From New York, an oral history of SNL, Ferrell says when you leave the show, you’re not allowed to say you graduated; Michaels, he explains, hates the word. That’s reasonable enough: To say you’ve graduated means you’ve moved on to something bigger and better after years of training for it; it diminishes SNL, making it sound like Michael’s Learning Annex course in comedy. Besides, it is often a springboard for mediocrity: The show has turned out many millionaires, but few of substance—hell, maybe just one. Only Bill Murray has managed to fashion an admirable filmography that only gets more venerable over time; his haunted, touching performance in Sofia Coppola’s Lost in Translation is among the year’s best.

Ferrell, who has the range of a sniper’s rifle, has it in him to follow in Murray’s footsteps without stumbling. If nothing else, that is his plan.

“I was just talking about that!” he says, using his big voice. “I was just saying how that’s, like, the guy. I love the way he’s gotten to kind of bounce back and forth and do all these things. The same with Luke and Owen Wilson. I don’t think it’s conceited, but I think that’s the only way that I’ve approached comedy, more as an actor than as a comedian in a way, even when I was doing the silliest sketch at the Groundlings or on SNL. Molly Shannon and I used to talk about this all the time when we were at SNL. The only way we knew how to play it was real and straight and as if it was really happening. In Elf, it’s not as hard when you have an elf suit. I would always say, ‘Whew, thank God I’ve got this costume on. It’s half the battle.’ But I’ve got to kind of play against that, against the fact that I was completely unaware that what I was wearing was not normal.”

The next two years may well prove whether Ferrell will be Murray’s heir apparent, or just the next Kevin Nealon. There are nearly a dozen projects before him—some forthcoming (Anchorman, an ensemble comedy about newsmen in the ’70s, which he co-wrote), some just finished (films directed by Woody Allen and Luke and Andrew Wilson), some announced but not quite definite (Curious George and a big-screen Bewitched). Most are comedies, but there is the one “heavy drama,” as Ferrell describes it: Winter Passing with Deschanel and Ed Harris, in which he offers moments of comic relief in a story about a woman who moves back in with her estranged father.

“I always hoped, in that Bill Murray way, to get to kind of be in a film like Winter Passing,” Ferrell says. “So it’s going to be fun to see if the audience continues to come with me, or if they just say, ‘OK, enough of that. Go back to the other thing.’ The Old School thing just triggered a new line of thinking about me, and I am lucky that I kind of work with some people who have some decent foresight and want me to do different things. Every project can’t be perfect, and there’s kind of a mix between the things. At the very least, there’s something distinct about every choice I try to make, and that’s kind of all you can hope to do with it.”