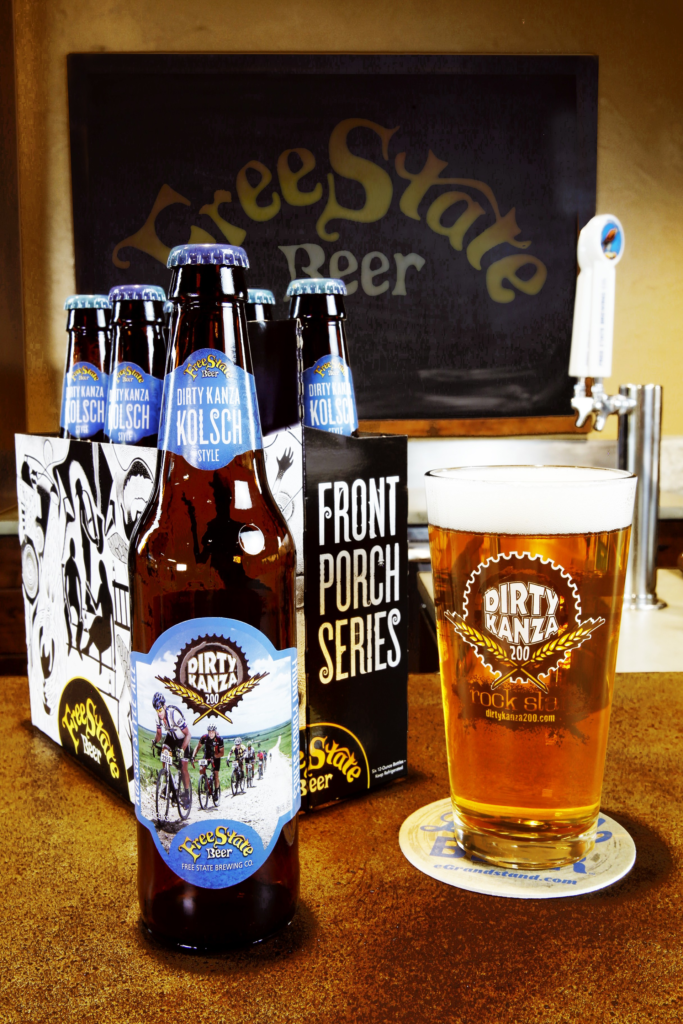 The Dirty Kanza 200 deserved a beer to call its own, and Free State Brewing has obliged. Lawrence’s hometown brewery has released the Dirty Kanza Kölsch in honor of the 200-mile gravel-grinder bicycle race through Kansas’ Flint Hills.

The German-style session beer is the first release in Free State’s new Front Porch Series, and it just started hitting store shelves in Kansas and Missouri yesterday. Every two to three months, another limited-release beer will be released in six packs.

“We had wanted to do something like this that allows us to have some new things coming out on a regular basis — new things coming out in package, not just on draft,” says Free State head brewer Steve Bradt. “We’ve always tried to have a variety of specialty draft releases for people to pick up. That’s a somewhat more limited market.

“We expect the series to have some things that might be familiar to people already,” Bradt adds, “and also some newer things that give people a little extra excitement.”

One of those familiar beers is the Dirty Kanza Kölsch.

“We had made this beer to be a great finisher for that race for people who get done with a long, grueling ride,” Bradt says, “and for the folks who have been waiting for them to get to the finish line.”

And once the racers reach the finish line, they’ll find something that’s “a little bit lighter, very refreshing style of beer,” Bradt says.

So look for five or six Front Porch releases a year. The next planned release is Garden Party, a light lager is infused with cucumber, juniper berries and basil that should also be familiar to Free State fans.

“It’s a beer that we’ve done at the pub in the past,” Bradt says. “We’re still planning and finalizing some of the rest of the beers in the series. In part, because we have so many favorites that we’d like to see included in the series, but we haven’t quite come together on which ones we’re gonna extend on out with. I think you’ll definitely see a few old favorites from the pub show up on that series.”

And new is definitely on the minds of the brewers at Free State’s production facility, who may have missed the frequency of brewing new beers at the pub.

“We needed a way to include people in that in a little bit of a broader scope and bring that variety and adventure into our packaged beers,” he says.