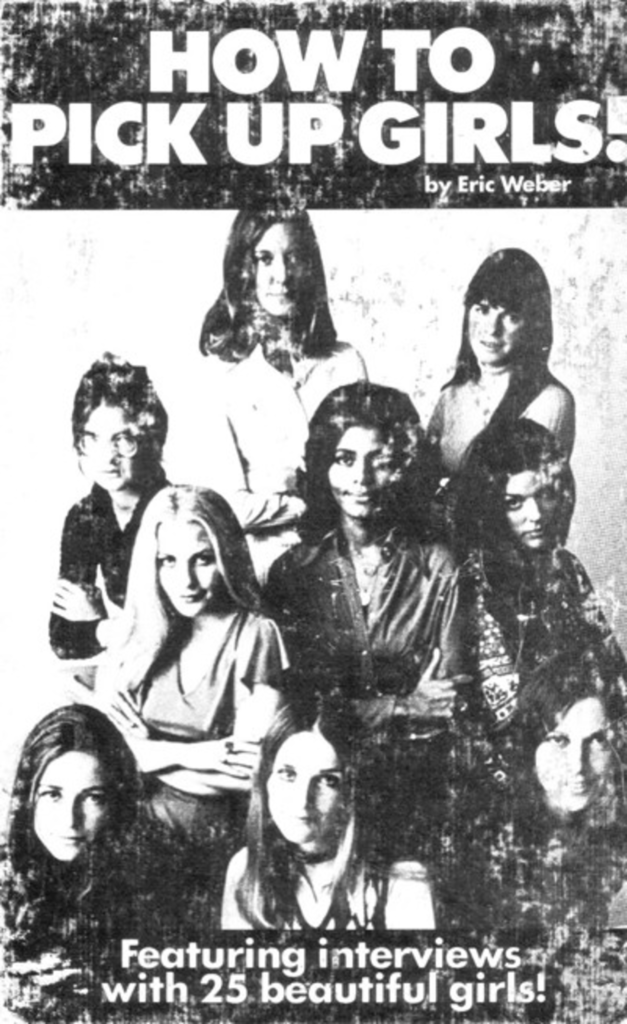 Title: How to Pick Up Girls!
Author: Eric Weber
Publisher: Symphony Press, New York
Date: 1970
Discovered: at Goodwill, Bonner Springs
The cover promises: Much that the book fails to back up.

“The point of this story is not that the girl was ‘bad’ or ‘fast’ or ‘avant garde.’ All it indicates is that normal, healthy young chicks like sex. Want sex. And, most important, will be glad to have sex with you if you only ask them.” (page 21)

In his introduction to this “foolproof guide to meeting women,” author Eric Weber — a sort of horn-dog Sherpa for voyagers in the brave new world of 1970s promiscuity — describes what he considers a familiar situation. You’re a guy, walking down the street, and you see this girl: “Someone so absolutely stunning, so downright sexy, you actually find yourself running to catch up with her…. For an instant you even consider rape.”

This is the dark side of the sexual revolution. Please, if you’re one of those people who has qualms about calling yourself a feminist, consider how much that movement has accomplished: Just a few decades back, at the end of the idealistic ’60s, there was nothing uncommon about men such as Weber insisting that women were asking for it. “Why do you think so many of them have completely stopped wearing bras and panties?” he asks. Then he adds, panting: “They’re showing you their breasts and behinds to stimulate you. To make you want to go to bed with them. To get you to caress and fondle their lovely behinds and soft warm breasts.”

“Try on some of the new wild clothes. Bell bottoms and English boots and wide ties. Wear a body shirt or dungarees or a groovy vest…. Think sexy. Think, I am a virile male animal.”

Ah, but be yourself.

“If you aren’t the wittiest guy in the room, don’t try to be Jerry Lewis.”

Then swoon and lie.

“The woman you’re approaching must be made to feel you’re head over heels in love with her…. Half the time you want to pick up a girl, it’s because she’s got a set of breasts that make you dizzy. Or the face of a movie star. Or the hips of a belly dancer. Not because she has some magnetic inner quality. Or whatever the hell it is she wants you to flip over. But you can’t let them know that.”

Finally, don’t expect any of this to work.

“The author of a book on how to pick up girls was rejected more times than he can remember. And he lived to talk about it.” Worse, he even admits, “Before I started work on this book, I never came close to approaching a strange woman. I was sure if I did, I’d get bopped on the head with a pocketbook.”

• How do you cook a leg of lamb? (You’ve spotted a pretty chick in your grocery store.)

• Who’s your dentist? (You want to know how she came by such beautiful white teeth.)

• Where did you get that marvelous coat? (Tell her you work for a clothing company and think her coat is absolutely terrific.)

• Fantastic book! Have you got to the part where the butler murders himself? (The sexy girl sitting next to you on the bus is reading a book you’ve just finished. Or even a book you’ve never heard of.)

• I love you. (To be used half in jest at parties and in singles’ bars.)

• I’m writing a book on picking up and I’d like to ask you a few questions. (I found this to be the picking up line of them all!)