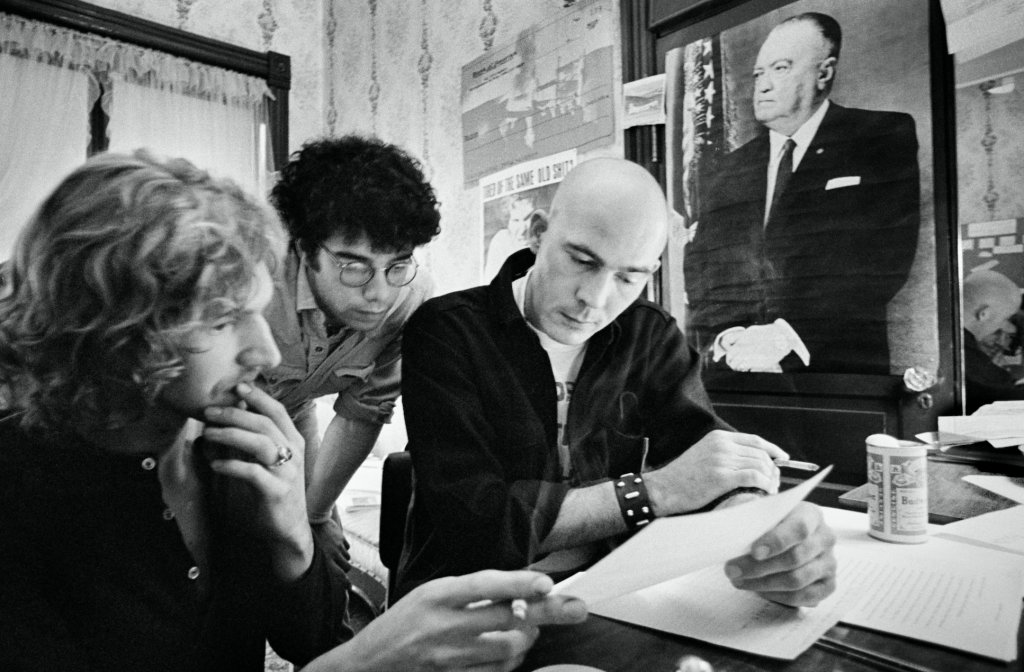 At some point, you’ve likely seen the famous “Thompson for Sheriff” poster artist Thomas W. Benton created for Hunter S. Thompson’s 1970 campaign for Sheriff of Colorado’s Pitkin County. Certainly, Thompson’s run for office is a familiar story among the gonzo journalist’s fans. It’s usually noted as an oddity, however, a publicity stunt blip. Given Thompson’s reputation for wild antics and tall tales, it’s hard to tell on a surface level how seriously people took his campaign at the time, or how seriously we should consider it in retrospect.

It turns out, according to D.J. Watkins, writer, filmmaker and owner-operator of Aspen’s Gonzo Gallery, people took it pretty damn seriously. In 2015, Watkins—a Lawrence native now living in Thompson’s hometown of Aspen—wrote Freak Power: Hunter S. Thompson’s Campaign for Sheriff. This year, he followed it up with a documentary, Freak Power: The Ballot or the Bomb, co-directed with Ajax Phillips (who goes by the artist moniker Ajax W. Axe), currently available on-demand at AppleTV, Amazon, Google Play, YouTube and Vimeo. The film is an entertaining and fascinating look at Thompson’s campaign and its impact on local and national politics, told through archival footage. I spoke with Watkins about his experience making the film, Thompson’s impact on Aspen’s culture, and how the world has changed in the decades since his campaign.

How long have you been interested in Hunter S. Thompson’s run for sheriff? Were you a fan of his work before?

The appreciation for that art led to my first book on Tom Benton, which was released in 2011, and won the Colorado Book Award. That was my entry into the gonzo world, because Tom and Hunter were best friends. That led to my book on Hunter’s campaign, and once we found this footage, led to the film.

Tell me a little about how you sourced the footage from this film. I was impressed the whole thing seemed so well-documented.

We had about 4,000 photo stills to choose from. In addition, there were actually multiple film crews involved at the time, independent as well as organized teams. It’s interesting that, since he lost, some of the filmmakers decided it wasn’t worth finishing their film at the time. I was just in the right place at the right time to have these relationships with the people who were there. The book (Freak Power: Hunter S. Thompson’s Campaign for Sheriff) paved the way, because people saw the type of work I do, and I earned people’s trust to make the film.

But it is amazing how many people thought it was worth capturing, and it is kind of sad and weird it was never seen until now. We felt a responsibility to do a good job because all these talented people had taken their time to document it.

You definitely had no shortage of talented people behind the scenes on your present-day crew.

There were amazing people involved in the film. There was Ajax Phillips, our co-director, who was great. Mimi Polk-Gitlin, the lead producer, worked on Thelma and Louise, and made a lot of Hollywood connections happen. Gustavo Santaolalla did the music, and Gary Clark Jr. did the end title song. Our sound guy, Craig Mann, who worked on Whiplash, did all the sound mixing.

How did you manage to land so many great people? Did you start out with that goal?

We were lucky in that the pandemic kind of played in our favor because people weren’t doing anything. A lot of production stopped around the country, so there was all this top-tier talent we might not have had access to, but they were all of a sudden available. That’s a credit to Mimi, because we said “let’s never compromise” and “let’s aim for the top.” I couldn’t have gotten those relationships on my own, so it was a credit to her and our other producer Angus Wall, and others to shepherd this thing.

Something else surprising to me was the way Thompson comes off in this movie. Your film provides a much different perspective on him than I expected. I think most people’s memory of him is much more wild and unpredictable than the version we see here. I wouldn’t vote for the author of Fear and Loathing in Las Vegas, but I would vote for this guy. What’s the relationship between the Thompson we see here, and the Thompson most of us are familiar with?

Nowhere in any of our archival sources, audio, video and interviews was Hunter being wild and outrageous. There were a couple of funny, quippy sayings, and he was a character. He was captivating. But we made a decision to try and focus on the serious side of him, not only because the material portrayed him that way, but also because the wild stuff has been done a lot before.

He seemed so reasonable, and he was passionate and articulate and focused. We tried to look at that side of him, because that’s really the way he was then. We talk about his productivity falling off in later years, but he still had an amazing run as one of the greatest writers in America. But like, this was all before cocaine, it was before the outrageous behavior.

There were various points when decisions were made about how to portray something, and we wanted to focus on the serious side, because it was important. It might have started out as a joke, but they were deadly determined. We wanted to challenge people’s existing ideas about who Hunter was, and it adds another dimension to his character, as a serious political leader and theorist.

Like you, I’m from Lawrence. The way your interviewees describe Aspen in the 60s and 70s reminded me of the things I love about my hometown. Do you see any kinship between those two spaces?

Lawrence in the late 60s and early 70s feels like one of the places as close to armed revolution as anywhere else. The KU student union burned in 1969. George Edward Kimball, who became a famous boxing reporter, also ran for sheriff of Douglas County in 1970, the same year Hunter ran in Aspen. Lawrence and Aspen were both countercultural hideouts, and full of young, progressive, interesting people.

Growing up in Lawrence and knowing about that history, and learning about William Burroughs, and John Brown giving a speech in front of Free State Brewery definitely gave me an appreciation for the counterculture. History was an important part of growing up in Lawrence. Outside my parents’ place, there’s a stone plaque on the ground about Quantrill’s Raid. I’m lucky to have grown up there because they have such great community and education. 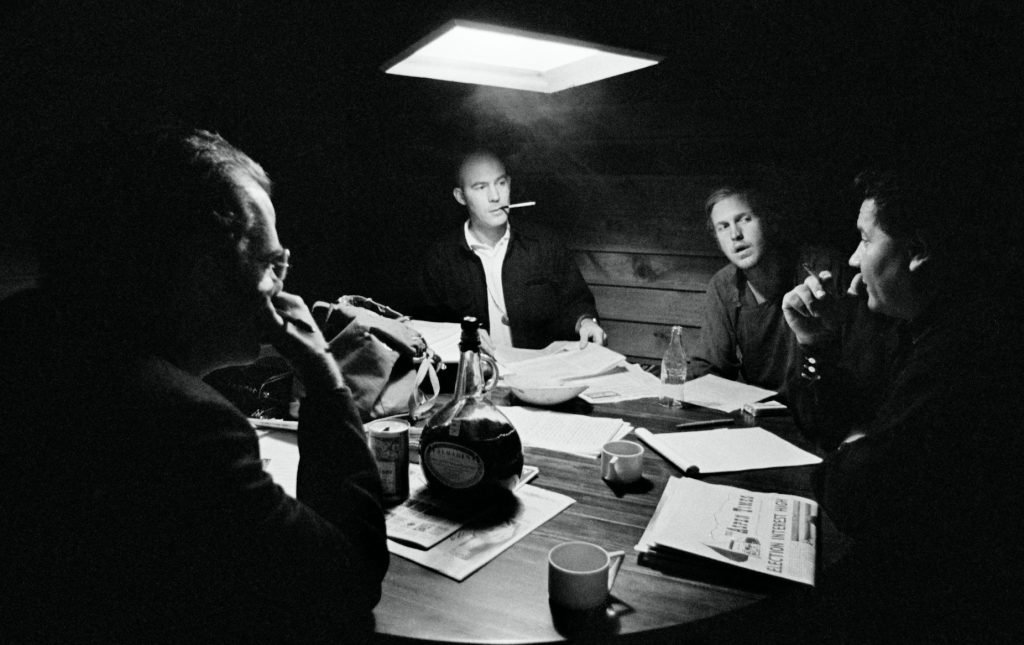 How has that counterculture scene in Aspen changed since the time you cover in the film?

People like to say Aspen was built in the 1880s on silver money and the 1980s on cocaine money. One of the unintended consequences of limiting development opportunities, which Hunter and his friends did, was it limited the supply. When that happens, the demand grows, and the prices grow. We call it the glitter gulch. It’s definitely taken on a form of one percent, international elite kind of deal.

There are still ski bums here, and a lot of the waiters have master’s degrees, and the dishwasher has a Ph.D., weird stuff where people are here because they love the mountains and the town. I’m a believer that just because something changes doesn’t make it worse, just different. The town has changed a lot. There’s a scene in the film where Tom Benton talks about it, and that was just in the 1970s.

I think Aspen’s changed more than Lawrence has. I find it interesting, though, that whole period in Lawrence, where now we have Black Lives Matter, and in 1970, when Ricky Dowdell was shot in the back in an alleyway in East Lawrence, police for a certain amount of time wouldn’t even go to East Lawrence. I think Hunter and his ideas on reforming law enforcement, he was ahead of his time. He was talking about police brutality, and heavy-handed police response, and wanting to move toward community-based law enforcement.

On a related subject, there have been discussions lately about the sociopolitical similarities between 1969 and 2020. I don’t think I fully understood what people meant until I saw the montage at the start of this film. It’s this emotional onslaught of intense stuff. Having done your book and now this film, what connections do you notice?

That beginning montage, we had some of the most talented editors in Hollywood working on the film, including Will Znidaric, who edited Winter on Fire (the documentary depicting the 2013-14 Ukrainian political protests) and Angus Wall, the other lead producer. His idea was “Hey, let’s establish context.” If you knew what was happening fully in 1969 and 1970, you could have a real appreciation for the events in the film.

There were 4,000 bombings in 1970. Hunter called it The Summer of Hate. I don’t think kids today realize the crossroads our country was at in terms of civil discourse. It’s comforting to know we went through such a crazy time, but on the other hand, how far have come? We wanted to set up through that montage what was happening through that period.

As events started to unfold in our country over the last year, people who were working on the film started seeing parts of the movie come to life in real-time, stuff in the film like Kent State, or the police brutality in Chicago. We’d get excited, like “Geez, we’re doing the same thing we were doing then,” and we didn’t plan on it, but we walked in on it, and I made a commitment early to try and make the film radical politically. We did recut the film, and we definitely leaned into the material as it became more relevant. We were right on time with it.

Your film discusses how Hunter’s campaign empowered other people to get involved in politics. How do you see that legacy, like policy changes or strategies, impacting the world now?

We could’ve made a whole movie about the legacy, and how Hunter laid the groundwork for future political vision in the valley. By getting all the young people registered and engaged in politics, although Hunter didn’t win, that massive voting bloc didn’t go away. They used their power to elect (Thompson for Sheriff campaign staffers) Joe Edwards and Dwight Sellman and enact a lot of the ideas Hunter had.

That also extended to Law Enforcement. Bob Braudis became sheriff, and he was a disciple of Hunter. This whole campaign had a profound effect. There was an article in the Aspen Times by Andrew Travers about how voter engagement from 1968 to 1972 went through the roof. People here took to heart a lot of ideas Hunter had. They worked to create the community they wanted. The Freak Power voter base led to that.

It didn’t stop in the 70s, either. In the 80s, we had cool mayors and judges and city commissioners. That involvement was pervasive in subsequent generations. I think that’s an important lesson from the film. You can enact change on the local level, and change your community for the better. Tip O’Neill said all politics are local, and Hunter said politics is the art of controlling your environment. I think this film shows how you can successfully do that. 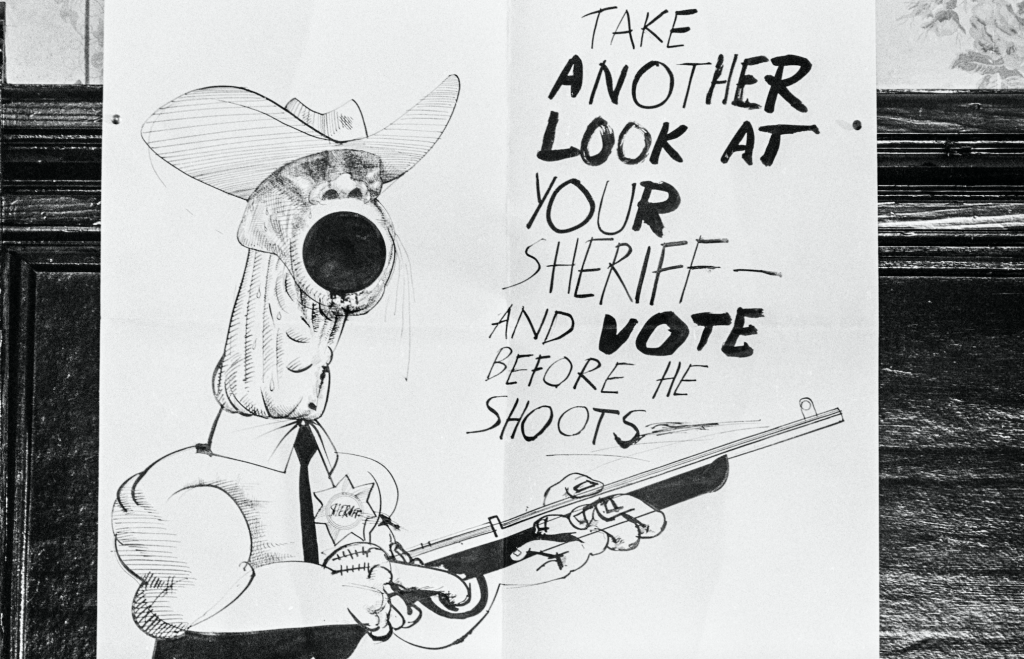