Fourth of July supplies the fireworks on its new record 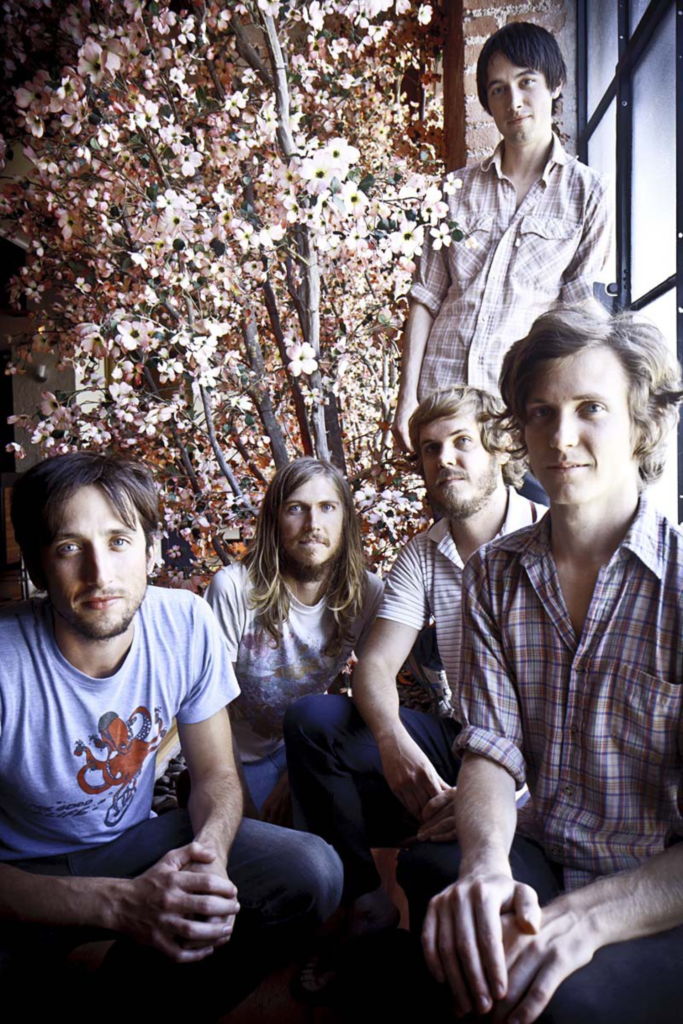 In the basement of Liberty Hall, Fourth of July frontman and songwriter Brendan Hangauer offers only vague, distant mutterings about his band’s excellent new album, Before Our Hearts Explode!

This is frustrating. As fans of the beloved Lawrence folk-rock band know, Hangauer can be scarily articulate. His best songs — usually acerbic, confessional dispatches from doomed relationships — hit on a specific strain of Midwestern malaise, and he confronts a concept that many 20-something smartasses are averse to addressing: Forging ahead when being clever isn’t enough to make the pain go away.

In other words, the guy tells the truth, which is why it’s disappointing to watch him avoid it. When the subject is changed to the dynamics of his band, he opens up a little.

“These guys know me really well, and they understand what I’m trying to say in my songs because they’ve watched me go through everything,” he says. “I write these songs about things that mean a shitload to me, and I want them to be pure. Then these guys — who I care about so much — come in and put their energy into them and make them bigger and better and more pure. More real. And that’s amazing to me.

“I’m going to cry,” he says, looking sheepishly at his brothers Patrick (bass) and Kelly (keys, trumpet), seated across the table. He’s at least half-drunk. “We’ve never really talked about this shit before.”

He doesn’t cry, of course, but that struggle and eventual arrival at a moment of truth recall the trajectory of many Fourth of July songs. As a lyricist, Brendan Hangauer often fumbles his way through verses and choruses with well-worn rhymes and tropes about being in love. Then he delivers some gem of a line — So just sleep in the middle of your bed like you used to (“Tan Lines”) — that, paired with the momentum of the music, stops a listener cold.

It’s a streetwise-slacker ethos: Lower expectations and then hit one out of the park. The crowd loves an underdog, especially one who’s heartsick.

Sonically, Explode is a natural extension of the band’s 2007 debut, Fourth of July on the Plains. Jangling guitars, familiar but not-too-trite chord progressions, and the occasional horn support Brendan Hangauer’s snarky baritone.

These days, Fourth of July is a family affair, with the three Hangauers supplemented by two Costellos: Brian (on drums) and, confusingly, Brendan. (He replaced lead guitarist Steve Swyers, who left the band to focus on Say My Name, his electronic, sample-heavy bedroom project.) The fourth Hangauer brother, Zach, runs Range Life Records, the Lawrence label that released both Explode and On the Plains.

“Zach has a real vision about the band,” Patrick says. “He knew what he wanted the sound quality to be like, and he spent a lot of time with Colin [Mahoney], our engineer, mixing the album and acting as a kind of producer. Zach was a huge part of this album.”

The label has also been a champion of non-Hangauer acts, such as Dri (which turns up on Explode), Suzannah Johannes, White Flight and Say My Name. If Lawrence ever blows up nationally, it would be in no small part due to Range Life.

But how to execute a Saddle Creek-style jump to the national music stage remains mysterious for Fourth of July and its label. On the Plains nabbed a positive Pitchfork review and some blog love, but the tipping point has proved elusive.

Relentless touring presents problems for Fourth of July, too. “Patrick has a baby girl. Kelly’s in school full time. Brian’s in school. I work at Jensen’s [Liquor],” Brendan Hangauer says. “It’s hard to get everyone together and hit the road that hard.”

It’s difficult not to think of the Replacements, another funny, likable group of unpretentious Midwestern dudes who never quite caught on like they were supposed to. Fourth of July members seem hopeful that Explode will connect with a larger audience, but they’re also wise enough to know that they have a good thing going as it is.

“I want more people to be excited about Fourth of July, but really, 20 years down the line, I don’t think I’ll give a shit how big we ever got as a band,” Brendan Costello says.

“A lot of bands will use Lawrence for what it is and then move to Brooklyn or whatever,” Brendan Hangauer says. “Fuck that. If we’re going to do anything, we’re gonna do it homegrown-style, reppin’ Lawrence. How could you not?”

Brendan Hangauer knows that if he plays it right, he might be able to get everything he wants on his own terms. Can he have it both ways, living in his comfortable college town and writing terrific songs that the rest of the world notices? Maybe. Until then, he’s going to keep singing about his girl problems in his own cynical, difficult and truthful way. And he’s betting that people will sing along.