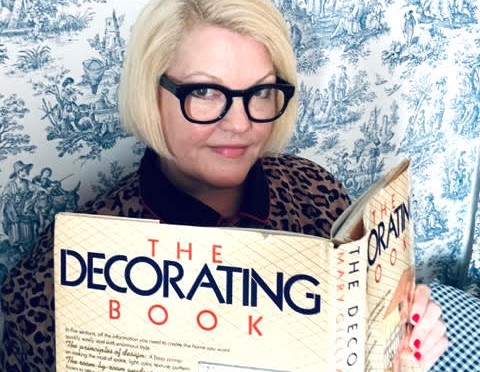 At last count there were—give or take—18,691,758,332 podcasters in the blogosphere. But back in 2005, the genre was unchartered territory. And that’s when Kansas City native Suzy Chase launched her very first podcast, The Groove Radio, a mixtape-esque love letter to soul music that was inspired by 80s era KPRS radio.

A few years later, Chase ultimately found her groove—as a foodie femme fatale who launched a cookbook podcast, the very first of its kind. In the years to follow, Chase’s podcast, Cookery by the Book, has garnered plenty of acclaims—and adoring fandom. (In fact, she’s held the #1 cookbook podcast since 2015.)

In 2020, a pandemic-driven lightbulb went off over her head. Chase shifted gears a bit and decided to launch a third podcast last September, Decorating by the Book. “It’s been a work in progress for so long. It’s a companion podcast to my cookbook podcast—because if you love cooking, you probably love decorating,” she says. “It’s a nod to my mom’s decorating sensibilities combined with my love of decorating coffee table books.”

We hit up the New York City-based podcaster with our four inane questions whilst she was seated at her all-purpose dining room table in the West Village. That’s where she does most of her work—including recording each and every podcast. “The table is straight outta my childhood home in Prairie Village,” she brags.

We asked. She answered. Everyone wins.

The Pitch: What is a word (or two) you hope never to hear again in any podcast?

What’s the worst piece of advice you ever received—that you actually used?

If you run out of dishwashing detergent, just substitute it with regular dish soap. It’s a big mistake I only made once. My kitchen turned into a sudsy, foamy explosion straight out of a comedy. Although it was mildly funny, I was cleaning up soap for hours.

What’s the most obscure food allergy you’ve ever heard of/cooked for?

Ok, this is going to knock your socks off. So, we all know people who are allergic to fish, but did you know some folks are allergic to fish odor? I just learned about this last year when I was chatting with a cookbook author about a fish cookbook. Brings new meaning to the old adage, something smells fishy here.

What are your thoughts on the time-space continuum?

Well, we all had to take a pause on working out during the pandemic lockdown. So, for the past few months I’ve been hitting it hard at my trampoline bounce classes, so I can fit back into the time-space continuum. I mean it’s the worst feeling when you have to suck it in to fit into other dimensions—who’s with me?

Bonus 5th Question: What’s the secret-est of secret ingredients to make any dish better? Or worse, for that matter?

The worst ingredient? It’s food grade shellac—I shellac you not! Shellac, also known as confectioner’s glaze, is made from a resin excreted by the female lac beetle. You will find it in just about every candy with a shiny shell. Think jellybeans and candy corn. Oof.