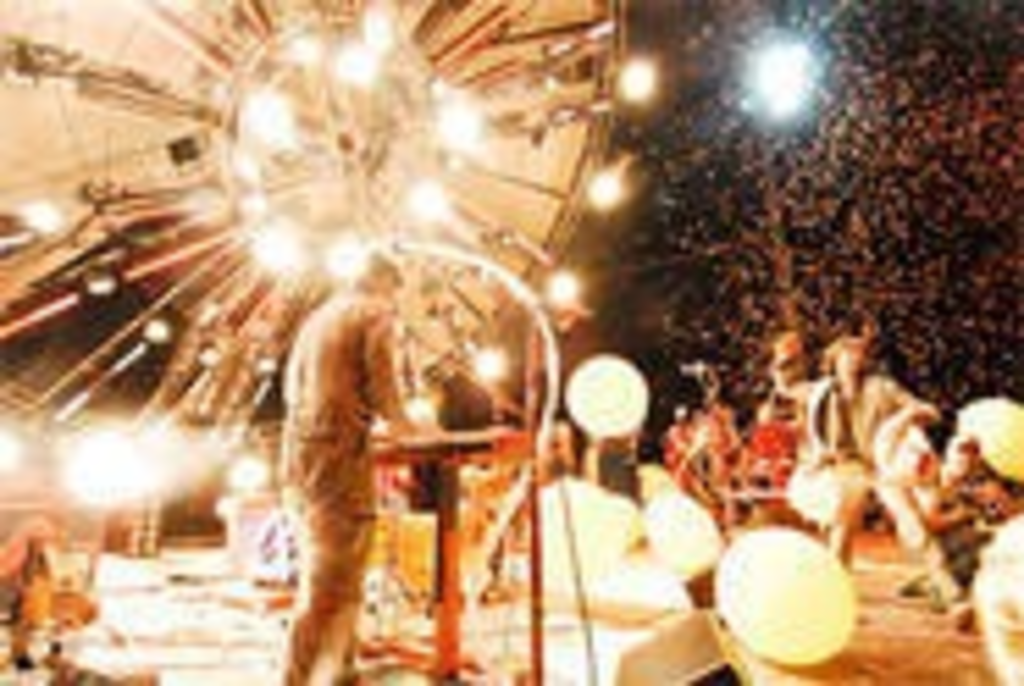 At the opening of UFOs at the Zoo, the first live DVD of the Flaming Lips‘ 20-some-year career, footage of druggies, hipsters and animal-suit enthusiasts hootin’ and hollerin’ is juxtaposed with real-life wild animals — tenants of the Oklahoma City Zoo, in fact, which is where the town’s Grammy-winning, acid-tongued native sons held the featured performance.

The show begins in typical Lips fashion, with fans onstage dressed like Martians or Santa Claus. Multi-instrumentalist Steven Drozd, bassist Michael Ivins and Lawrence-bred drummer Kliph Scurlock man their positions while singer and space-rock hero Wayne Coyne, encased in a giant inflatable ball, descends from atop a spaceship and makes like the coolest hamster ever by rolling over the crowd before warbling “Race for the Prize.” Needless, to say, all the fearless freaks in attendance go apeshit.

The Pitch called Coyne at his Oklahoma City home.

The Pitch: Are your live shows an extension of some fun-deprived childhood?

Coyne: No, if you were around me when I was growing up, you’d be like, “Wayne, you have the greatest life that could ever be.” I was this little kid that got to paint and listen to music and dream all the time. I do ’em [elaborate shows] ’cause I think it’s cool shit to do. Rock bands are sometimes so pretentious — they don’t do anything. But I don’t think every band could get away with it. As the Flaming Lips, there’s an element in our audience that says, “Wayne, come on, bring us the Wizard of Oz-from-outer-space that only you can do,” and I say, “Of course I will. Let’s go for it.”

Official trailer for the Flaming Lips’ new DVD, U.F.O.’s at the Zoo:

Will there ever be a time when the Lips decide to strip down, à la Kiss Unmasked, and do shows minus the fanfare?

A lot of times, we’ll play record stores where we’re literally just standing in front of you. It depends on the venue. What I hope happens, even at our most elaborate shows, is that something goes wrong. Like the Wizard of Oz — you see behind the curtain that he’s just this old guy. He really does care about you, about the things in life that are important, like love and trust and believing in each other.

We want to be perceived with that level of humanity and all those things that make music good. It’s not all the stuff that’s fantastical. It’s that we get to experience it together. Humans are fantastical, and music is fantastical, and that’s what we’re conveying. Not that we can get the biggest balloons in the country. We’re saying “Aren’t balloons great?” and “Isn’t music great?” or “Isn’t being with your friends and laughing for two hours great?”

Justin Timberlake famously donned an animal costume and joined the Lips onstage. Got any other celebrities worth outing?

Lily Allen was pathetic. Too much of a drama queen. We thought she might be fun, but it turned out to be the opposite. We couldn’t wait to get her off the stage. We were at Bonnaroo and heard rumors that John Paul Jones was going to come up, but we don’t really invite them [celebrities]. I don’t want anybody to think we exclude our fans. Our fans always come first.

Do you still have the key to the city that our former mayor Kay Barnes gave you at Mardi Gras in 2004?

I do, but, you know, it’s a very small key. I don’t know if people realize how small it is. It was fucking cold, do you remember that? But, yeah, it was one of the highlights of our life. Here in Oklahoma City, they have a street named after the Flaming Lips, but I gotta say, Kansas City was the first!

What can we expect from the new DVD?

We played these big venues across the country, and we were videotaping them, but of all of them, the one in Oklahoma City had this magic about it. Part of our urgency [in making the film] was there are so many clips of our show on YouTube that I could see someone look at them and say, “That sounds like shit.” We thought we should do what we think is the official version of our show. I think they’re great. I never wanted to do them [live DVDs] before, but now I think we’ll do more and more. The audience has such a glow about them. You never tire of seeing people that happy and enthusiastic. I never realized that until I started seeing the footage. I was like, “Fuck, if that’s what it can look like, then let’s do that.”