For poet Madison Mae Parker, the body is the muse 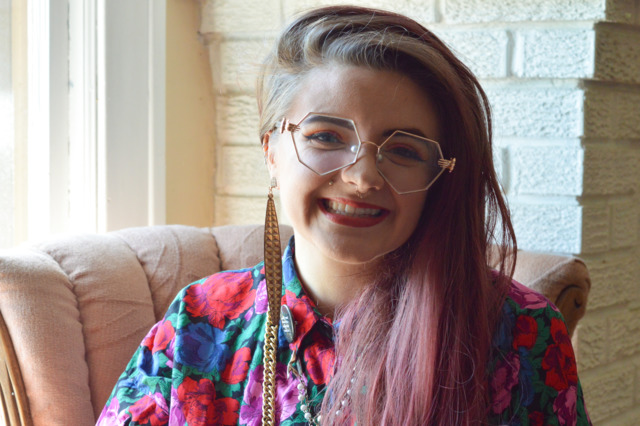 Giant red lips hang on the wall outside poet Madison Mae Parker’s studio space at Charlotte Street Foundation. They’re framed by an artist’s statement of sorts, in Parker’s handwriting: “Poetry is a mouth, kiss open its language.” She calls these pieces “poetic sculpture.”

Parker is fond of fusing her poetry with other forms, even when it’s uncomfortable. She’s been doing slam poetry since 2013, though it took awhile for her to embrace the stage.

“I had a really amazing roommate in college who signed me up on the open mic list and didn’t tell me, knowing that I would probably never get onstage without that push,” she says. “So it hasn’t always been a natural thing for me. Which I always like to tell people because they’re like, ‘Oh, I have stage fright.’ I’m like, ‘Trust me, if I got there, you can get there.’”

Parker moved to Kansas City from College Station, Texas, in 2016. She came for an artist residency at Transform, an artists’ community that seeks to “wrestle with the deep questions of art, faith and culture.” In September 2017, she accepted a residency at Charlotte Street.

“Getting to explore other mediums and to hear [resident artists] talk about their art and their art background and their creation process was, I think, very necessary for me in order to feel like I had access to explore some of these larger ideas outside of the page that I wanted to, like poetic sculpture and installations,” Parker says.

Unsure of what form her exploration would take, she began writing down her favorite things, such as movies or songs, and reviewing her existing poems. In both, she noticed recurring themes about bodies, fabric, womanhood, and religion. According to Rye Lanae Boothe, co-producer and director of Parker’s 2017 one-woman show “Unravel,” Parker’s choice to write and perform solo was intuitive.

“I think that there were these concepts that were too big to fit in her previous form, was writing three minute slam pieces or maybe writing a poetry chapbook or a small book,” Boothe says, “She is a performer, and she had this intuitive knowledge that this form would pull something out of her that needed to be pulled out of her. I think a one-woman show definitely suits the writing because it’s a very deep, introspective memoir.”

Parker is about eight years recovered from an eating disorder, and “Unravel” reflected her healing process.

“‘Unravel’ was this processing of womanhood and religion and bodies and my own process of coming back with my body after my eating disorder,” she says. “Because in my process of healing I kind of went from, ‘OK, well, overthinking about my body was bad, obviously, so the opposite must be to not think about my body.’ I completely disconnected from what I was experiencing in my body and [was] feeling very stiff and sterile in my body. It was this process of trying to reinvigorate and bring more play into my own body and my own life.”

Parker did not have formal acting experience prior to “Unravel,” so Boothe helped align her performance with the impact of the text itself.

“I think my job as director was kind of to crack her open a little bit to where her body and her voice realized the magnitude of what she had written so that she could be alive to the text,” Boothe says. “It’s remarkable how you can say words, even that you’ve written, and not be connected to them. So I think my job, and what I tried to do, was just to connect her to her words that were already so brilliant and so powerful and just get her body and her voice and the physicality of it to match.”

Parker’s currently working on a piece called “Stretch Marks,” which, like “Unravel,” examines her eating disorder.

“If I think back on my story, my stretch marks is a part that I still am embarrassed and shameful about,” she says. “I just decided to start drawing my stretch marks, just to force myself to start looking at my body. And then from there, it’s kind of become this whole series.”

Both “Unravel” and “Stretch Marks” involve a lot of fabric. Parker, who comes from a Christian upbringing, often looks to the Bible for metaphor, and in doing so has discovered multiple references to fabric. She sees it as a connective tissue between the physical and the spiritual in her work.

“Fabric acts as this veil, and fabric can actually be a veil, between us and something else,” she says. “It’s a way for us to visualize the wind, and it also holds onto everything it touches — sweat, water, dirt. It catches it all. It’s both unforgiving and forgivable and just shameless.”

“Stretch Marks,” intended to be complete in May 2020, will involve an installation, theater performance and a workshop space. Parker hopes to include stories from others willing to share their own stretch marks. Her intention is to remind people that they aren’t alone and provide them an opportunity to dive into their own story.

“I believe that poetry lives in the body, even if you’re not a ‘poet,’” she says. “It’s so easy to view it [a body] just as a vehicle, like, ‘OK, now I’m going to go here.’ But our body carries us through so much stuff. So how do we hold the intentions of our body as we would a poem? Hopefully my work reminds people that their body is good and necessary and holy and important — all of those things.”

Madison Mae Parker will be co-hosting a workshop at The Open Table on Sunday, July 14 at Second Presbyterian Church from 6:30–8 p.m.