For domestic violence victims with pets in the KC area, there are a few options — but more are needed 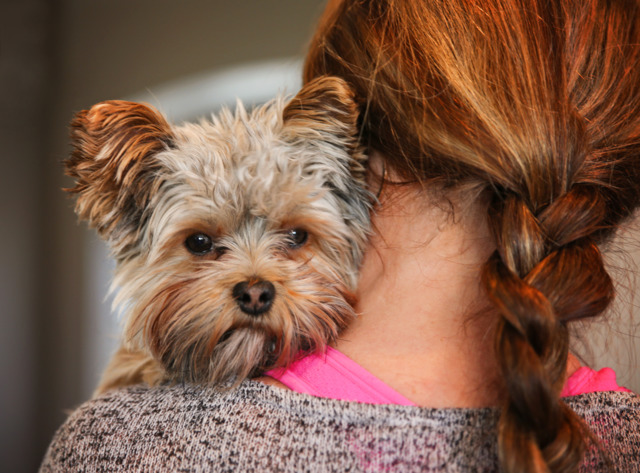 When Sunny moved in with her now ex-boyfriend, in 2014, she brought along her two dogs, Delilah and Abby. Things were great for the first six months. Then something changed. Sunny’s boyfriend became verbally abusive toward her. He tried to cut her off from her family and friends — even her son, who had just graduated from high school. Then, one night in early 2017, Sunny’s boyfriend held a gun to her head and threatened to kill her if she ever left him.

“He told me, ‘You are not leaving,’” says Sunny, whose last name is being withheld to protect her privacy. “But that’s the night that I left.”

Fearing for her life, Sunny snuck out to her car and left everything behind — including Delilah and Abby.

“At that point, I felt like I could go back to the house during the day when he was at work and get the dogs,” Sunny says. “He wouldn’t let me leave with them. There was absolutely no way for me to do that.”

Sunny adored those dogs — still does. She says her love for Delilah and Abby is comparable to the love she feels for her son. In fact, the dogs kept Sunny from leaving her abusive, three-year relationship sooner. Her boyfriend wasn’t physically abusive toward the dogs, but Sunny knew he wouldn’t take care of them after she was gone. And because the dogs were big — a rottweiler and a Staffordshire terrier — she assumed a women’s shelter wouldn’t allow her to bring them along. She figured if she took the dogs, she’d have to live with them in her car.

“I had my car, and that was it; I didn’t know what to do,” Sunny says. She takes a long pause before continuing. “It was very difficult. I think if I would have had a place to go and take my dogs, I would have left two years earlier.”

Many domestic violence (DV) victims find themselves in Sunny’s shoes. It’s estimated that 68 percent of households in the U.S. own pets, and nearly 50 percent of DV victims report delaying a decision to leave their abuser out of fear of harm to their animals. And while Sunny was fortunate enough to protect her dogs from physical harm, it’s estimated that 72 percent of DV victims’ pets are either threatened, injured, or killed. Like Sunny, many victims of domestic violence not only have to find shelter for themselves but their pets as well.

But finding a shelter that offers assistance to both victims and their animals is difficult.

According to Nicole Forsyth, CEO of RedRover — a nonprofit that provides grants for domestic violence shelters that care for animals — less than 10 percent of DV shelters in the U.S. allow pets to stay with their owners on the grounds of the shelter. While some shelters offer programs that house animals off-site, the majority don’t have the resources to sustain any type of pet services. So RedRover offers grants specifically designed to fund on-site pet care. And it’s making a difference: Approximately 165 DV shelters in the U.S. now host pet-housing solutions on-site, and half of those began with RedRover’s Safe Housing Grant.

“It’s a pretty big change for [DV shelters] to accept pets, and there’s a lot of fear of what’s going to happen if they have pets,” Forsyth says. “But so far, every grant that we’ve given, the experiences are positive. In fact, they’re shockingly positive because [shelters] are so worried that things will go wrong, and then they’re just really surprised when the entire culture of the shelter is better.”

Because the bond between humans and animals is so strong, Forsyth says the shelters that implemented pet programs reported seeing less stress amongst victims and their children. Studies show that spending as little as five minutes with a pet lowers levels of the body’s main stress hormone, cortisol, and increases chemical levels associated with happiness. It’s also safer for victims to bring their animals along with them: Abusers often use pets left behind to threaten their victims and lure them back home.

RedRover works with shelters to determine what programs fit best for them, often relying on a guide to co-sheltering people and their pets called the SAF-T manual. Some DV centers use onsite pet shelters with 24/7 access, while others have designated pet-friendly private rooms victims can share with their animals. Private rooms offer more benefits to the victims and their pets, but because many DV shelters have shared, dorm-like rooms, they legally can’t allow animals to live in the rooms alongside their owners.

Shortly after fleeing her abuser, Sunny saw a poster for the Rose Brooks Center on the wall at a clinic. She learned that the shelter kept designated spaces for dogs and cats at its Kansas City campus.

Rose Brooks helped Sunny file a restraining order, which allowed her to be escorted by an officer to retrieve Delilah and Abby from the house. These days, Sunny lives with her two dogs in her own apartment, and she’s getting ready to go back to school to study child psychology. She says she has no doubt that if it hadn’t been for Rose Brooks, she would have put herself in danger trying to go back to retrieve her animals. She might not have made it out alive.

Zoë Agnew-Svoboda, Rose Brooks’ PAW Place program coordinator, says that about 15 percent of the shelter’s residents came with their pets in 2018. But she also points out that the need for shelter for victims’ pets is much greater.

“That’s just what we were able to accept here at Rose Brooks Center,” Agnew-Svoboda says. “We actually turned away over 500 animals in 2018 because we didn’t have space.” (Agnew-Svoboda stresses that those were animals turned away after their owners called the hotline when Rose Brooks had no human beds available. If a human bed is available, but the pet shelter is full, Rose Brooks will make arrangements to house the animal elsewhere until an on-site space becomes available.)

When all the beds are taken at Rose Brooks, the only other shelter that houses pets on-campus in the Kansas City metro area is Hope Haven of Cass County, a half-hour drive away from Rose Brooks. A few other local shelters offer off-site pet solutions like boarding or foster homes, but because of the cost to board elsewhere ($50-100 a night), those options tend to be very temporary.

In rural areas, DV victims with pets have even less options. Andrea Quill, the executive director of the Domestic Violence Association of Central Kansas (DVACK), in Salina, says they’d like to house pets on their campus but currently lack the space. As a result, DVACK ends up turning away about one victim per week for this reason.

“We tell them about the shelters in the state that do house animals, but many people just don’t want to leave the community where their support system is,” says Quill. “So typically, unfortunately, a lot of them just go back to their situation.”

Soon, though, DVACK will be more equipped to help victims and their animals. The shelter received a grant from RedRover, and with the help of GreaterGood — a non-profit that builds housing for animals at homeless, veterans, and DV shelters — renovations will be made later this year to DVACK’s shelter that will include pet-friendly private rooms and house-pet crates in the basement.

But as pet ownership continues to rise, so will the need for these services in the area. Recognizing this need, Rose Brooks has partnered with RedRover, GreaterGood, and Bayer to educate shelters on steps they can take to efficiently implement pet programs. In May, they held their first partnered training event. Turnout was strong.

“We had representatives from almost every single local shelter, which was really amazing to see,” says Agnew-Svoboda. “I talked to several of them there and they all said, ‘We’re going to make this happen.’ The goal is to have that done within the next year or two.”