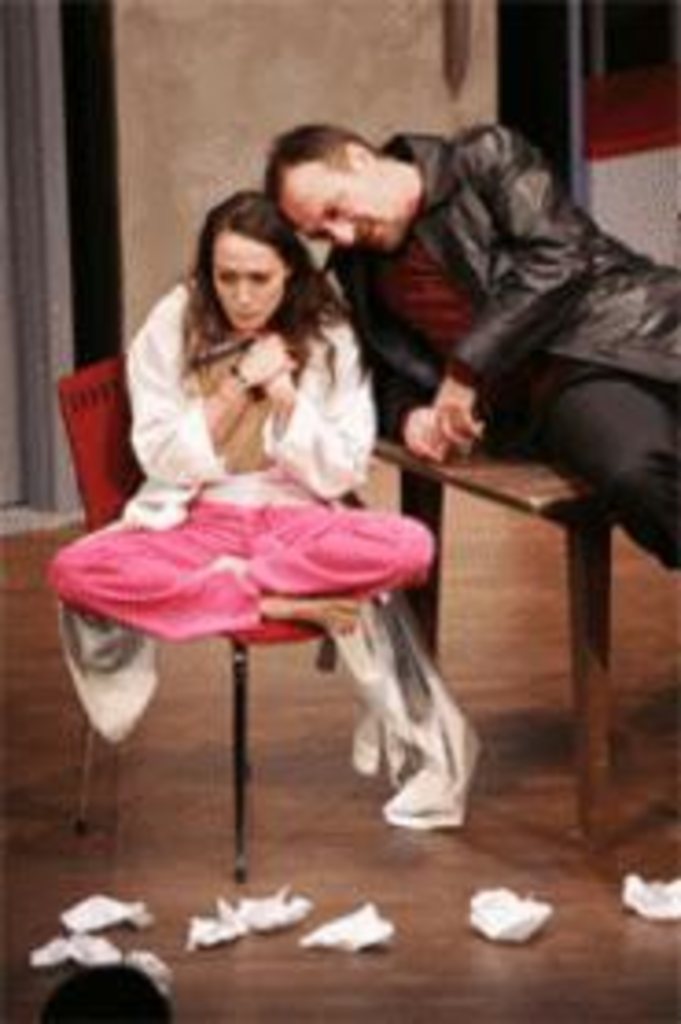 By my math, Mark Robbins has given me something like 10 hours of real, rich pleasure over the past year.

Not bad for someone I’ve never met.

Taken in a single shot and not doled out over a series of performances in the year’s finest plays — including The Voysey Inheritance, The Cripple of Inishmaan and his latest, the dark yuletide farce Absurd Person Singular — the Robbins’ unflashy showmanship could last you from here to Denver.

Show after show, Robbins has sunk into his parts and given us characters we don’t necessarily like but always feel for. Usually, he plays someone who’s after something that will hurt someone else. His men wheedle and plead — often, as in Absurd Person Singular or Retreat From Moscow, for release from the women to whom they’re pledged — and Robbins makes movingly clear their interior dramas. Tough as it is to get what they want, most men are working even harder to convince themselves that their causes are just.

In Absurd Person Singular, his Geoffery is an architect of souring fortunes. He’s grumbling and difficult, cut from life rather than farce. This makes the funny bits funnier. Rooted as it is in shame, farce works best when the humiliations are heaped upon someone we believe in — such as throughout the hysterical second act, when Geoffrey tries to host a cocktail party, tame his dog and prevent the suicide of his girlfriend, Eva, played here with mute electricity by the excellent Vanessa Severo.

The play, by Alan Ayckbourn, covers three years of Christmas Eve parties hosted by three British couples of varying social stations. Our perspective is limited to each couple’s kitchen, meaning we get more kvetching than celebrating. We see hosts panic; we see the bored and uncomfortable seek refuge from the living room. We see how castes chafe against one another; we see, by the oddly bleak yet joyous ending, how the British class structure is painfully sorting itself out.

Ayckbourn’s great success is that his structure never feels limiting. Though he heeds the formal elements of farce — there’s much hither and thither through each kitchen’s every door — the pain and humiliation are real.

His ideas engage, even during a few duff bits. By the third act, the youngest, poorest and most annoying couple has ascended, but only by investing in the kind of godawful shopping centers that have left much of England looking like our 51st state. The old social order vanishes as these shopping centers profitably replicate themselves; these days, its money that matters, not class. The Plaza crammed with busy chain stores is much more lucrative than one filled with boutiques that most folks only gawk at.

Robbins gives us a guy trying to hold it all together. The rest of the ensemble is also strong. As the up-and-coming Hotcrofts, Cinnamon Schultz and Brian Paulette are over-the-top, hailing not just from a lower class than Geoffrey but from a different play, gadding about and squealing and barking nearly incomprehensible British-isms. This is both funny and right. The Hotcrofts’ goofiness — seemingly inspired by the goons populating generations of British comedy — is like flint to the other characters’ steel: The clash is what sparks.

And as the final, most august couple we get Merle Moores and Kip Niven, from whom we expect nothing but excellence. Both come through. Moores makes a fantastic drunk; Niven is given a bit of slapstick straight out of a Chevy Chase movie, but he makes it sad, hilarious and a little frightening.

Robbins also directs, and his effort is brisk and solid. Everyone’s in the right spot, but nobody seems unnatural in getting there. The sets are efficient but a little ugly, but that’s British kitchens, isn’t it?
Absurd Person Singular is the second production by the new Kansas City Actors Theatre, and it’s the troupe’s second winner. The first, last summer’s The Cripple of Inishmaan, was extraordinary in every capacity. Last week, I was fortunate enough to catch up again with Cripple Billy himself — University of Missouri-Kansas City grad student David Graham Jones — in another extraordinary show, UMKC’s The Maids’ Tragedy. Directed with vigorous inventiveness by the Royal Shakespeare Company’s Barry Kyle, the show was an Elizabethan jaw-dropper, proof that all of the things English majors claim are dirty truly are. Homoerotic overtones here become make-out; just as on 3 a.m. Cinemax, stabbing is fucking and fucking is stabbing.

These thrilling moments wouldn’t matter if the acting weren’t sharp and subtle. As a royal twerp cuckolded on his wedding night, Jones sustains a pained, impotent rage; as Evadne, his bride (and the king’s mistress), Ingrid Andrea Geurtsen sorts through a tangle of feelings, savoring her sexual power but mourning her maidenhood. And for the third time this year, I have been impressed by MFA student Mateusz Lewczenko, who finds soul in difficult characters. He’s like a Robbins-in-waiting, this guy.