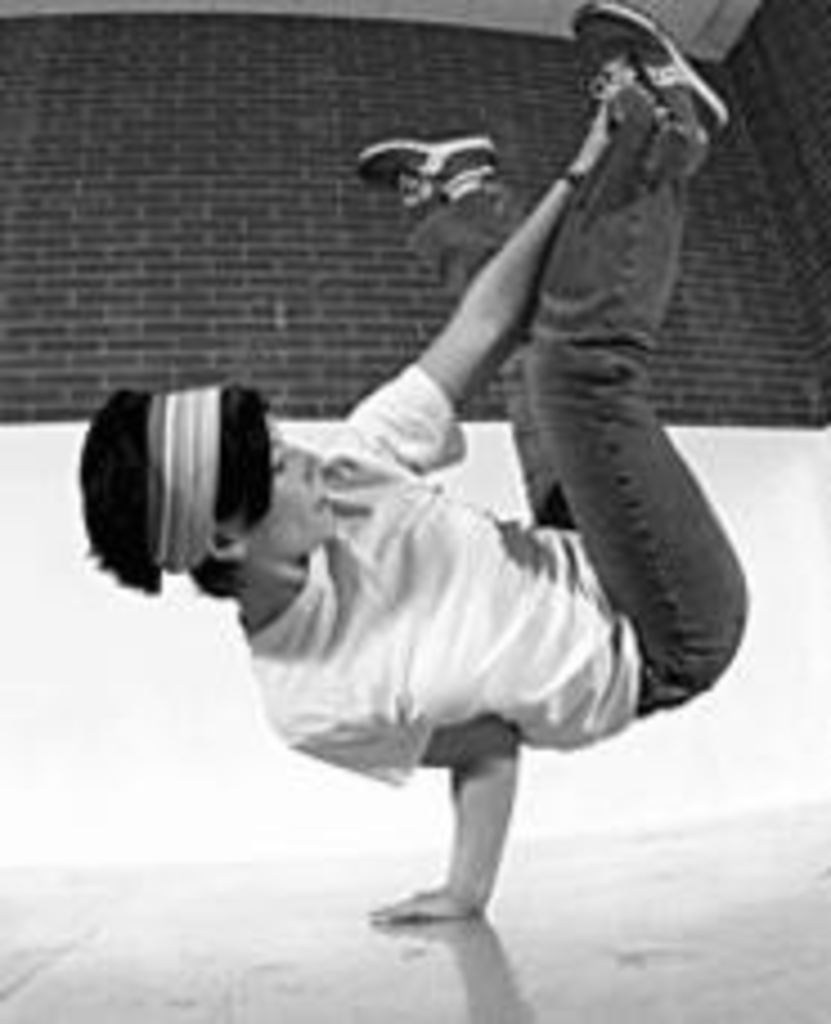 This was a big day, and not just because it was sunny for a change. Mr. Wiggles, a member of famed Los Angeles group the Electric Boogaloos (formed in the late 1970s), would be heading to a giant, unassuming U-Haul warehouse at 24th Street and Prospect to judge a B-boy battle. Even the name of the contest — “The Best of the Best” — was ambitious. For a man with a silly name, Wiggles appeared to be quite serious about our hometown showdown, even if it was hidden in a smallish, Midwestern nonvenue.

For the first few hours, at least two dance circles were going at any given time, with baggy pants-wearing poppers moving so fluidly that they appeared jointless, while kids with crazy attitude threw down with graying men in warmups. Kansas City’s stylishly dressed-down Dirty Q-Tips and Lawrence’s well-pierced Buggin’ Out Crew dominated one circle, with a few small, strong Japanese guys thrown into the mix.

These guys all battle regularly, but there are never any hard feelings. When one shaggy Lawrence guy was in the circle and a flier fell out of his jeans pocket, the next guy to step in did a handstand and slowly bent his arms, dipping his head close enough to the ground to pick up the tiny sheet of paper with his mouth. The gesture was a perfect metaphor for the camaraderie that exists among members of these battling crews: You pick up my trash while assuming an acrobatic pose, and I’ll do the same for you.

Stepping into the circle after a guy with Jamaican-themed attire and seashells for pony beads was a man with a crew cut and wire-rim glasses. He wore a button-down oxford with a sweater vest over it. The number of pale redheads in striped shirts was staggering. Guys with love handles and man boobs weren’t afraid to shake it, either. Yes, that was a good thing. And outsiders were greeted and waved in without a second glance.

When Wiggles finally arrived, people started walking through the crowd making w’s with their hands, alerting one another that the guest of honor had arrived. Almost immediately, he announced that he was ready to watch the poppers and begin narrowing the field to 16 dancers.

Popping involves a lot of gliding footwork and snapping upper-body movements. When poppers dance, every muscle and every vertebra takes on a life of its own, moving as a separate entity. Breakers, on the other hand, hit the ground. They do gymnastic stunts like handstands and freezes — they sometimes even spin on their heads — and they use lots of macho posturing, challenging each other with aggressive hand gestures and engaging in full-on battles.

The poppers competed first. As the last few competitors got ready to step inside the circle, Mr. Wiggles uttered aloud, for this whole room to hear, what I’d been asking myself privately for the past several months.

“I’ve seen a lot of good dancing so far. But what’s up with the females?”

Thank you, Mr. Wiggles. I almost wanted to clap. Because with all the diversity I was witnessing, one kind was missing. Before the battles had started, a handful of girls in the crowd looked as if they were dressed to get a workout. A few even appeared to be warming up. But not one of the poppers in this competition came without a Y chromosome. Later, Wiggles would tell me that Kansas City is not unique in this sense, that everywhere he goes, he challenges women to get out and dance.

It’s a funny thing, this scene. Being obsessed with almost any other form of dancing will get the average guy mocked, if not beaten up. When I overhear even the most testosterone-fueled B-boys talking about their moves, though, I could sometimes swear I’m back in the ballet dressing room, talking to my friend about how those triple pirouettes are coming along. For some reason, spinning around on your butt three times is much more masculine than spinning around on your toes.

Several months back, I asked Vinnie from Buggin’ Out Crew if there were any B-girls around here. He directed me to a woman named Mingo. He said she was the only one with any clout. “She has a lot of dedication,” he said. Sometimes, he added, she even practiced with his crew.

When breakdancers would appear in bars, I’d ask if anybody knew Mingo. Nobody did. The dancers were always guys. The women hanging out with them ran the video cameras.

I’d almost given up when I walked into Birdie’s panty shop on 18th Street one day, looking not for breakdancers but for a slip. The shop owners both happened to be busy that day, but a cute woman with spiky black hair was working behind the counter, headphones in her ears. After discussing the merits of various cuts of briefs and agreeing that full coverage was important, the clerk — wearing a bright-orange slip over jeans — mentioned that she had an underwear line of her own. She called it Mingo Starr because she liked flamingos.

I had found her.

My earlier quest hadn’t been successful for a couple of reasons. First, Mingo — whose real name is Kelly Marshall and who sometimes dances simply as B-Girl Kelly — isn’t too keen on bars. The cigarette smoke gets to her. She’s more likely to battle outdoors or in weird venues like the U-Haul warehouse than at Jilly’s on a Friday night. Also, she’s loosely affiliated with both Buggin’ Out and Dirty Q-Tips, making her a full-on member of neither. It was the Buggin’ Out guys who first took her seriously when she said she wanted to learn to break, and she learned her first moves from B-boy James. Mingo still practices with Buggin’ Out, but because she lives in Johnson County, she also comes to Kansas City to dance with the Dirty Q-Tips from time to time. But just because you catch one of these crews does not mean you’ll catch Mingo.

“The trick was to find somebody who wanted to teach me,” she says, recalling how she got into breakdancing. “There’s a lot of BS that goes on forever. This guy James, he saw that I really did want to breakdance. He taught me some six-steps, some freezes. More than anything, he practiced with me. I did tons of handstands.”

Every now and then, she gets to battle another girl, but she hasn’t met her match. “There’s other girls who dance, and there’s other girls who pop, but nobody ever throws down with me,” Mingo says. When she and some of the Buggin’ Out guys went to see You Got Served, they were sitting in the theater with a large group of high school-age breakdancers. Throughout the movie, one of the twerps was throwing coins at them, and by the time the movie was over, Vinnie was so riled up that he started a battle before even leaving the theater.

Mingo stood to the side, but a girl in the other crew challenged her. “She just shook it at me, and then flicked a coin at me,” she recalls. She wasn’t exactly inspired by the booty dancing, but she stepped up. “Even though I wanted to hit this girl in the face when I was battling her, we totally gave each other props before we left,” she says.

If the other girls she meets out on the scene are far from what she would call peers, so are the girls and women in the Saturday afternoon hip-hop class she teaches at the Culture House in Overland Park. Watching her push a group of mostly ballet-trained dancers to show attitude and use heavy, menacing movements is both inspiring and discouraging. It’s inspiring because Mingo is trying to change the fact that she’s the only girl around here who can do this, and her students are into learning from her. It’s discouraging because it’s obvious that most of the teens and young adults in this room have been trained to tread lightly, to be gentle and weightless, not to stomp and challenge and bully. That can change, but it will take time and patience.

Wearing a red hoodie and jeans in a sea of cotton stretch pants, Mingo tosses out frequent reminders that the movements don’t have to be perfect, that it’s OK if the dancers stick out their butts. They might need to stick out their butts to get enough momentum to throw themselves back-and-forth on their feet. She reminds them of a crew’s attitude: “We’re so awesome — we’re punching, throwing, getting all mad.”

While changing CDs, she gives a little lecture on hip-hop.

“Hip-hop music is not that stuff you hear on the radio. I’m cool with all that stuff. It’s got good beats and everything — even though some of those lyrics are not cool — but to me, that’s hip-pop. Real hip-hop has a message other than going to the hotel and getting the woman.”

She explains some of the aggressive hand gestures with easy-to-understand comparisons to everyday movements. “I think about throwing stuff out of my pocket,” she tells the class. “It’s like, ‘Yuck, get out of my pocket.'”

Mingo high-fives everyone when the class is over. Maybe one or two of these girls will join her in a battle sometime down the road, but they aren’t ready to get up in front of Wiggles at Best of the Best.

There, Mingo was the only girl to compete. “There’s a lot of pressure because you’re the only one,” she admits. “If a guy goes out there and looks stupid, it’s no big deal, but everybody remembers the girl.”

Among the breakers, Buggin’ Out competed first against Dirty Q-Tips. The adrenaline in the room was amazing — as were the moments of dancing in unison. With bandanas keeping sweat out of their eyes and jeans hanging loosely on their slender hips, they were challenging each other, throwing the top rock and doing the nonverbal equivalent of talking trash, but they were also smiling and laughing, and it was obvious that they were friends. Wiggles was impressed, too.

Mingo didn’t choose sides. She waited and joined a crew called Just for Fun, up against the opposing Japanda. And when the only female to answer Wiggles’ plea for ladies got out there — hitting the ground and getting up in guys’ faces, wearing a plain, sensible T-shirt and khakis so she could really move — well, let’s just say that my friends and I could have kissed her.