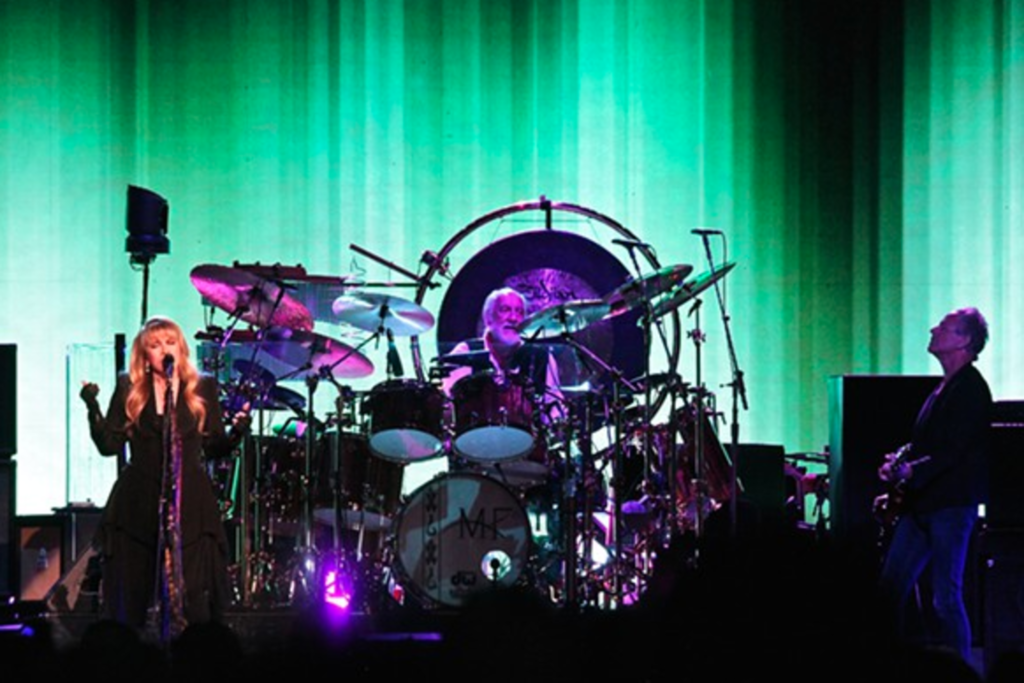 “If you would have asked me ten years ago, I never thought I’d be doing this,” Christine McVie announced to the Sprint Center audience last night, before she began “Everywhere,” her first lead song of the evening.

Indeed, McVie was not alone in that sentiment. The majority of Fleetwood Mac’s throbbing audience – which very nearly sold out the Sprint – had likely never dared to hope the day would come that McVie would once again be taking her place at the keyboard on stage with her former bandmates. After a 16-year absence, this joyful reunion is part of what made last night’s two-and-a-half hour show so special. 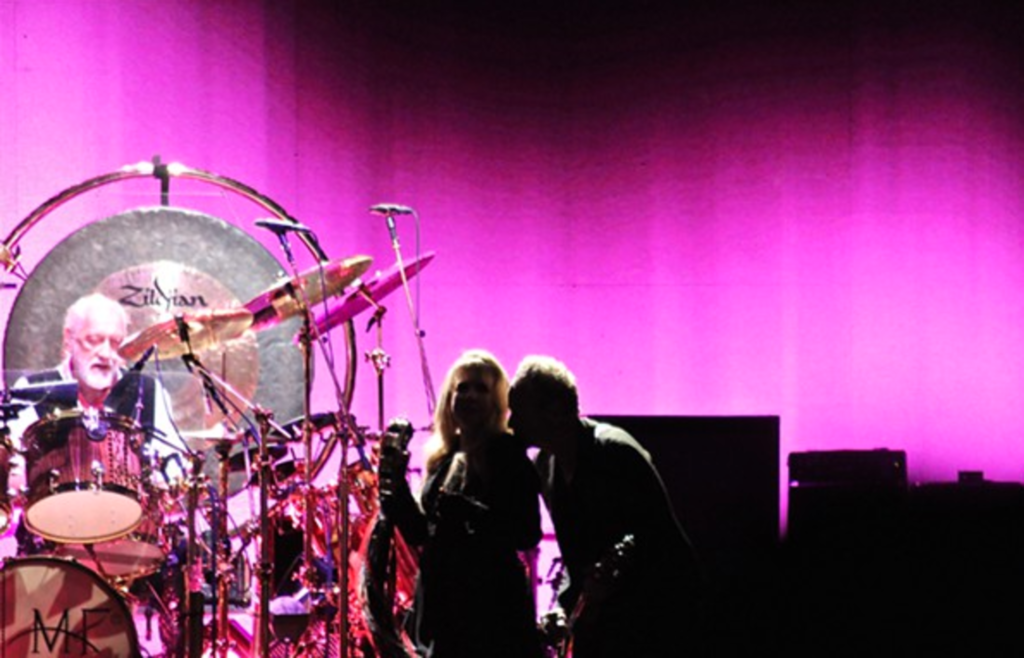 The rest was pure nostalgia, with a 22-song setlist packed with fan favorites performed with the kind of enthusiasm artists generally reserve for their freshest material. Lindsey Buckingham and Stevie Nicks were in fine form, the former acting as both a tireless shredder – his agile handiwork was displayed multiple times on the large screen behind the band – and gooey speechmaker.

“I think it’s safe to say that we are a group of individuals that has seen its share of ups and downs, all very well documented,” Buckingham told the cheering audience, “but I think you could say that that’s what makes us who we are.”

With that, the band launched into a spirited rendition of “Book of Love,” followed by an incendiary “Tusk,” the start of which was heralded by some intense tusk imagery morphing on the back screen. Often a divisive song among Fleetwood Mac loyalists, this version – dark, sexy, smoldering – was massively winning. McVie took up accordion, and Buckingham took the opportunity to let his between-verse yelps get rather primal. 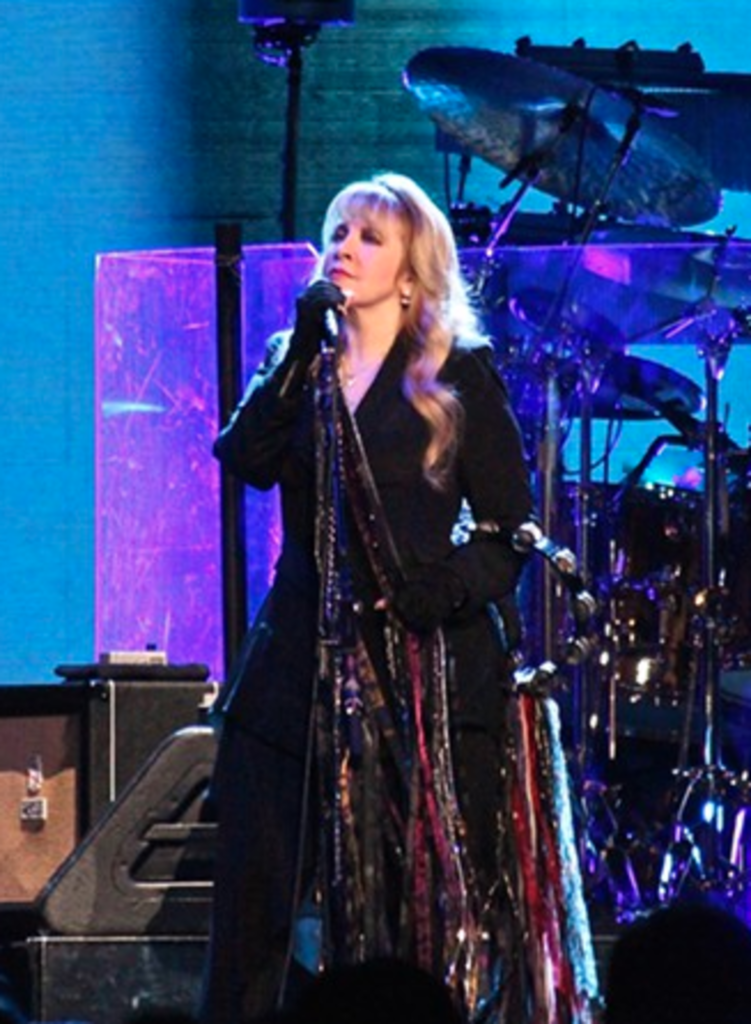 “Sisters of the Moon” came next, and Nicks was magnetic. Throughout the evening, it was hard to tear your eyes away from her: She was stunning in a flowy, all-black ensemble, complete with platforms and fingerless gloves. Her microphone stand was wrapped in strips of black fabric and strands of glittery beads, and she made good use of it as she tipped it toward her dramatically. Her voice has aged only slightly, the rasp a little more pronounced, a little less honeyed, but it suits her.

On the other hand, the years have laid in a little harder to McVie’s voice. Though she still keeps her dusky alto, the range she once had seems limited now – this is the reason, perhaps, that her stunning “Songbird” seems to have been dropped from recent setlists (earlier in the tour, it was being performed). 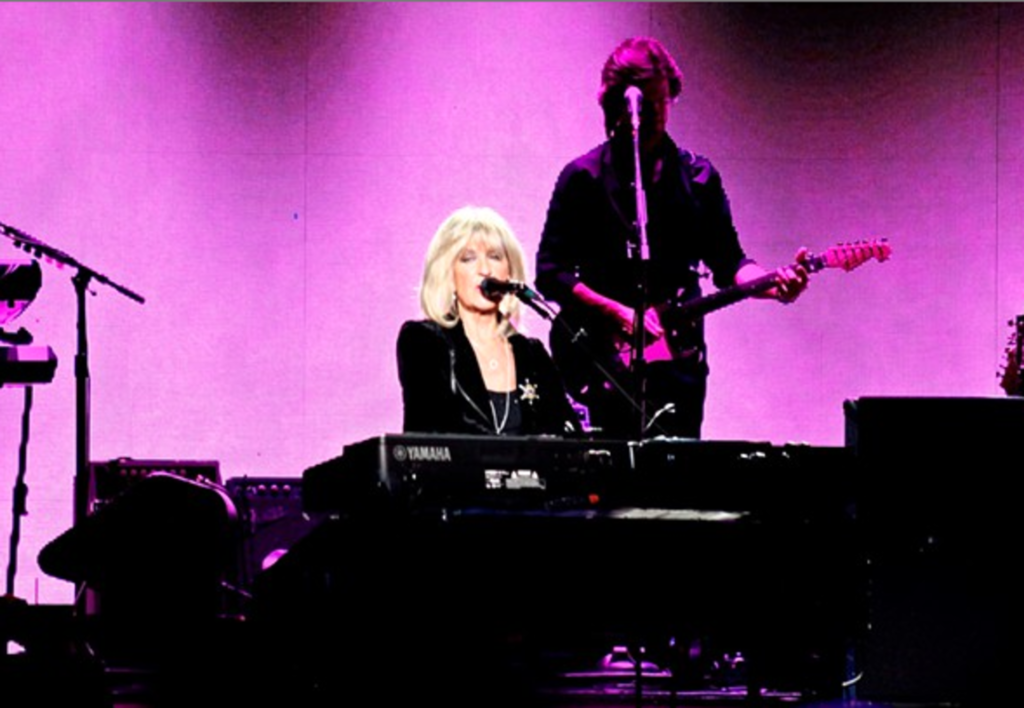 Still, having McVie back was enough to make up for that. There was something deeply intimate about Fleetwood Mac’s entire concert – a massive achievement, considering the setting. When McVie, Nicks and Buckingham shared a look of deep sentiment as they simultaneously closed “Say You Love Me,” the audience breathed in that personal moment. There was a transparency throughout, as the other band members were so clearly enthused to have McVie back with them.

Buckingham was particularly vocal about his love for this reincarnated lineup of Fleetwood Mac, and for the band’s fans. He introduced “Big Love,” from the band’s 1987 album Tango in the Night, as a song that was written before a good portion of the audience was born – “You have to wait for time to reveal whether you’ve done your job properly, and I guess we must have done something right,” he added proudly – and he performed it solo. When it was over, he took a bow, patting his heart with his left hand as he soaked up the fervor of the crowd. It was a common gesture from him throughout the night. 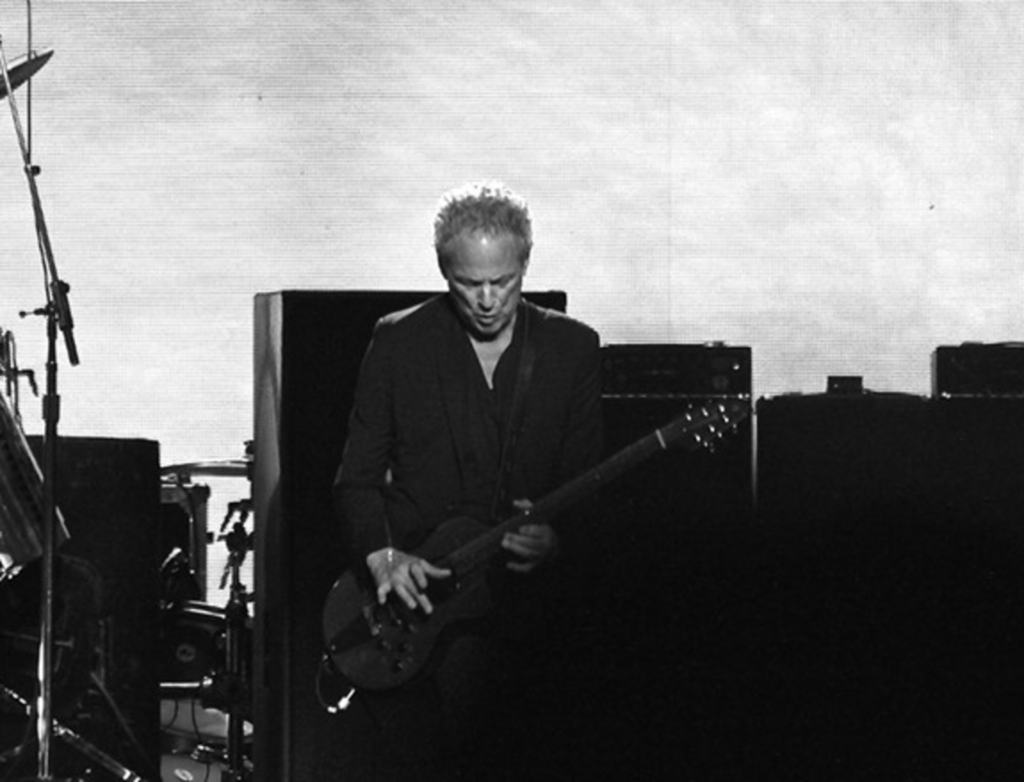 Nicks joined Buckingham then for “Landslide,” introducing it with a touching dedication to her late father.

“This next song was my dad’s favorite song,” she told the crowd. “He always thought it was written about him. Of course, it wasn’t, but I let him think that because it made him feel good, and I like to mention him now, because it brings him back to me.”

Not even the massive sing-along that began as the duo performed “Landslide” could diminish the impact of the song, and I noticed several audience members around me wiping away tears. Another tender moment: When Buckingham took Nicks’ hand and kissed it before she led into the final verse.

Nicks was again the center of attention for “Gypsy,” which she introduced with a lengthy – but completely worthwhile – story of origin. She was a mystical force as she tossed her head back and twirled and twirled on stage, an ageless queen. During “Gold Dust Woman,” she delivered a witchy, full-bodied dance; it looked like an exceptionally beautiful bit of exorcism. 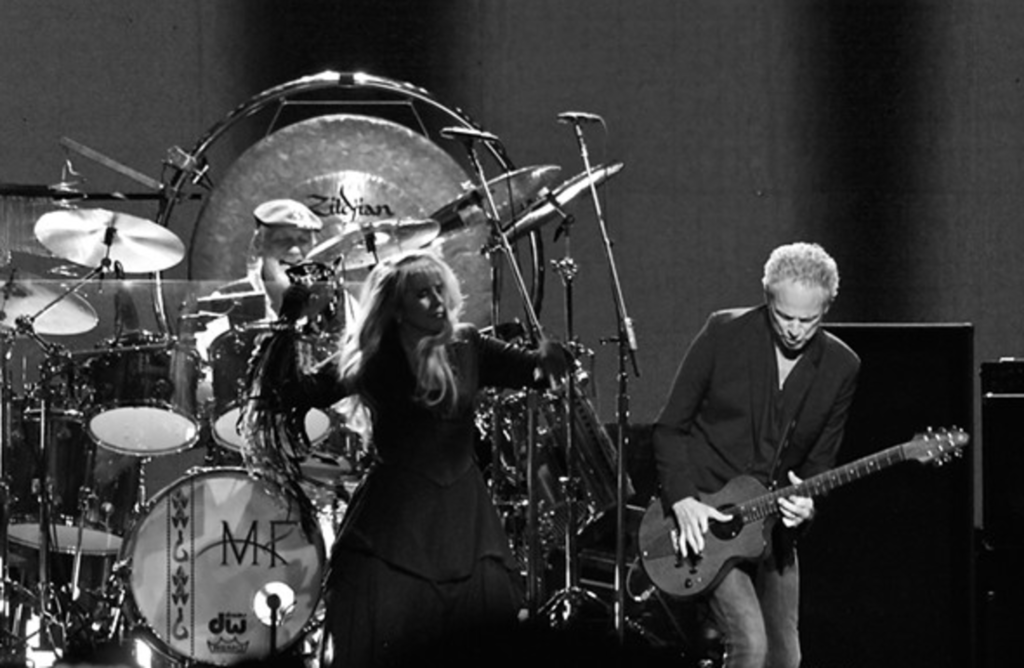 Buckingham took the spotlight for “I’m So Afraid,” and despite the lyrics, he didn’t exactly come across as a man with any fear in him. More than any other, this song featured some impressive and heavy riffs. Buckingham’s talent as a guitarist was never far from the mind, and though the jam session featured in “I’m So Afraid” bordered on showboating, it is easily forgiven (and most in the audience likely didn’t mind).

The set closer was “Go Your Own Way,” and Nicks donned her black top hat for it. Buckingham extended his guitar into the audience members crushed up against the stage, allowing a few eager hands to pluck at his strings.

The encore wasn’t far behind, and Mick Fleetwood got his well-deserved moment of glory with the extensive drum solo that is “World Turning.” The addition of his crowd-hyping yelps were not as necessary as he seemed to think them, but they served their purpose, and soon the rest of the band returned for “Don’t Stop.” The song seemed to have a greater meaning in the context of McVie’s return, and that wasn’t lost on the Sprint Center audience, which enthusiastically recited the chorus. 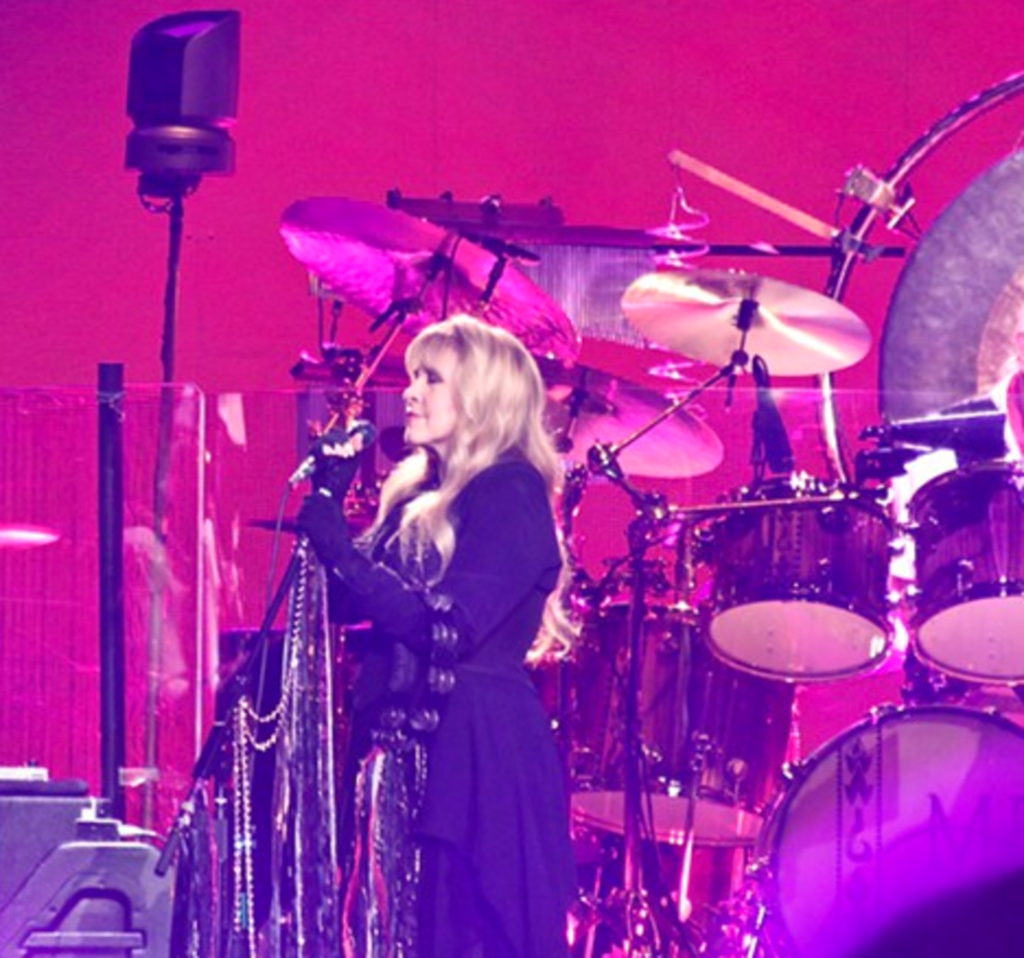 The final song of the night was the heartbreaking “Silver Springs,” perhaps because Fleetwood Mac wanted to leave its audience in tears. Nicks performed it phenomenally, and when she sang Time casts a spell on you, but you won’t forget me, there was an understanding among fans: No matter how much time passes, Fleetwood Mac is unforgettable.

The night ended with brief statements from Fleetwood and Nicks, and though Fleetwood followed her, it was Nicks whose words felt the most sincere. She addressed the audience as casually as she would a group of friends: “I want you to love each other and make peace in the world and be kind to each other and sing and dance and stay in the groove,” she said, beaming. “And come see us next time.” 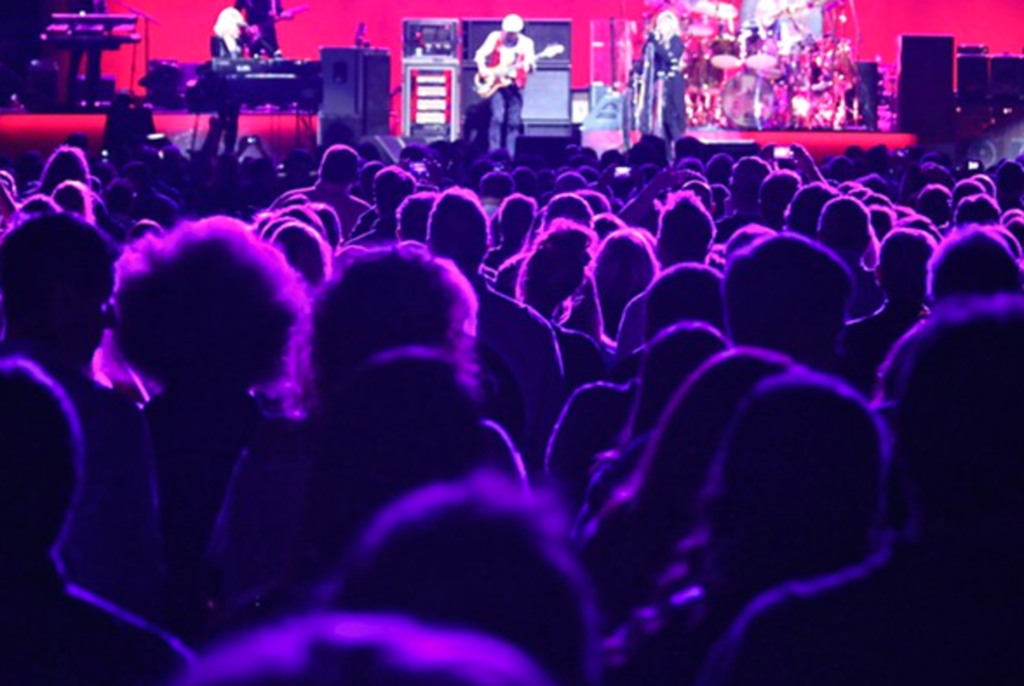