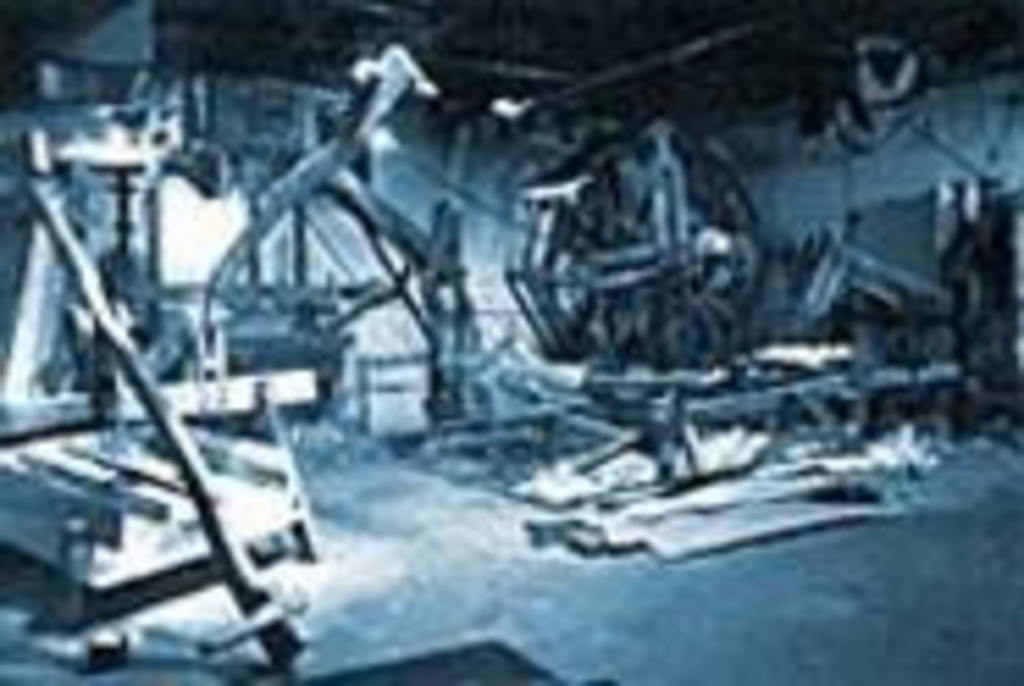 Few realize that the Grand Arts space is equally divided between a gallery and a workshop. The gallery space is known for its shows, often of cutting-edge contemporary work, but lesser known is the fact that these shows materialize through artists’ projects that take place over a period of time on site. In 1994, co-directors Sean Kelley and Margaret Silva sought to create a place for radical experimentation, without the constraints of too little time and even less cash. This required Grand Arts to raise a ton of money from the private sector — a radical task in and of itself — and its tireless efforts bear fruit with each successive project and show.

What makes this space unique is its willingness to put the artist’s vision first. There’s little or no concern for the resulting work’s salability. Challenging subject matter, nontraditional media, and unlikely processes are encouraged. Video artist Brad Braverman presented a four-part exploration of “deviant” sexual behavior in 1995; Glenn Goldberg translated his obsessive paintings into glass in that same year; and in 1997, Mel Chin and the GALA Committee (an artists’ collective) inserted site-specific artworks into Melrose Place sets. Such outright edginess, media-jumping, and context-shifting opens the door to new possibilities for art’s role in society.

Grand Art’s current show, Fast (a playful combination of “future” and “past”), looks back at former projects and introduces us to projects yet to come. Kelley and Silva invited artists who participated in their programming over the past five years to display new pieces, and the pair asked artists slated for future projects to provide a sneak peek. When a gallery houses several artists’ work, there’s bound to be some standouts. Although each artist here commands his or her sensibility and method of presentation, the work that is rich in emotion and made with unique materials arouses the strongest response.

Hirokazu Fukawa’s “After Trinity” draws one into its deceptively simple sphere of influence. On top of a carefully crafted table sits a tentacled, round form of clear glass. Beneath it, from a hole drilled into the tabletop, emerges a bath of red light. Fukawa’s strength lies in his poetic use of form, as was seen at Grand Arts in 1995 in his etched stone project dealing with autism. Here, he notes the profound change from a pre- to a postnuclear world, but his oddly beautiful bauble, glowing from below and tinged with sorrow, refuses to judge the effects of that change outright.

Minneapolis artist Chris Larson, who exhibited at Grand Arts in 1997, continues to explore the surreal with his medieval, hand-carved environments. This time, he presents a video, “Gastrol Colony,” centered around one of his constructions that’s housed in a barn. Larson uses the medium of video to document his interaction with the piece. He turns cranks and cuts through membranous rubber. Gears turn, sticks dip into containers of clear liquid, and oil oozes from hoses and along troughs. Eventually Larson dons a viselike helmet attached to the whole and lies on a slab. His foot pumps a pedal and the slab bucks up and down along with the rest in synchronous motion. Through a combination of autoerotic and psychological release — with an underlying tone of pure horror — Larson transfers life from himself to his wooden machine.

Prospects for the future at Grand Arts continue to ignite the flame of radical possibility, with curious pieces in the next room alluding to projects by such notable artists as Vito Acconci and Dennis Oppenheim. Particularly exciting was the work of Einar and Jamex de la Torre. Their set of glass-encased boxes — framed with fake fur and contrasting bands of embroidered edging — sizzle with class-consciousness and visceral humor. Colorful representations in glass of Catholic imagery sit within the confines of each box against a painted background. One version of a bleeding heart, complete with shiny drops of blood-red glass, pays homage to Mexican culture, acknowledging the beauty of auto detailing, tattoo art, and street vendor craft. The de la Torre project alone will be a joy to see.

Of course, radical work costs money, and one can imagine that artists scramble for the opportunity to work at Grand Arts. Herein lies the paradox for artists: They seek to create visions that often cannot be sold, visions that are not easily digested by the public. They do it because they feel strongly about their work, but ultimately, it is precisely these rare visions that fetch huge sums in the marketplace. A bathroom rug (purchased at a discount store) from one of Mike Kelley’s installations went for a ludicrous amount of money a few years back. Out of context, this rug became meaningless, but the marketplace cares little for meaning. Kelley’s radical reputation and experimental spirit made that sale possible. It’s a strange world.

Still, Grand Arts, with its strong financial resources, allows the radical to exist in Kansas City, and its current show renders with clarity its ultimate aim. So try to forget the odd tie that binds fine art to the marketplace and enjoy the work on its own terms. Besides, if I had anything to say about it, Chris Larson and the de la Torre brothers would live like millionaires.