They say the heart wants what it wants, and what my heart almost always wants is a doughnut with my morning coffee — specifically, the soft, spongy kind topped with so much frosting that the stuff flakes off in shards. Unfortunately, they also say you shouldn’t eat doughnuts every day.
But so far, no monolithic collective they has weighed in on toast, muffins and other non-fried coffeehouse treats. In fact, I don’t even need to have exceeded my weekly pastry quota to order one of these five favorites.

Health Nut muffin
Mildred’s (1821 Wyandotte)
This friendly Crossroads coffee shop isn’t one to go small: It’s pastry case contains such wonders as a fire-alarm-sized brioche cinnamon roll. There’s also gooey butter cake, alongside various sweet breads. But it’s still possible to sate a craving without assigning yourself an extra hour on the treadmill tomorrow. Made with considerably less sugar than regular muffins, the Health Nut here won’t leave you feeling deprived. Packed with nuts, seeds and dried cranberries and topped with an apricot glaze, this fist-sized cake is dense, moist and sweet — and goes perfectly with an iced mocha. 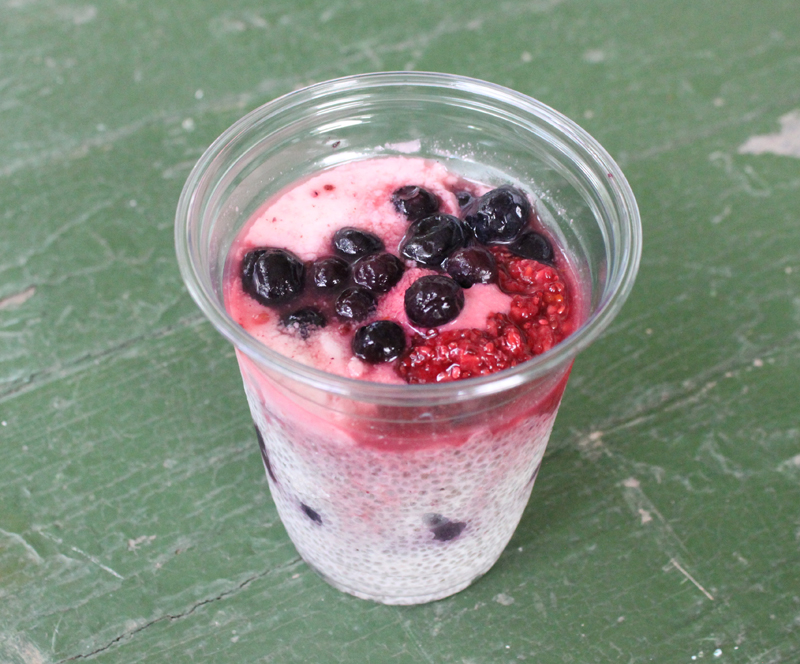 Chia-seed pudding
Unbakery and Juicery (634 East 63rd Street)
From giant peanut-butter cups to macaroons to pad Thai, pretty much everything at this new Brookside lunch spot has never seen the inside of an oven — hence the name, Unbakery. How does raw food taste? Well, it tastes healthy. Not that one wants for indulgences here. The tangy, refreshing ginger bars alone are worth making a special stop.

Then there’s the chia-seed pudding. It looks like some kind of science experiment, with tiny, brown beads dotting the creamy concoction, but don’t let that scare you away. The texture of the house-made, almond-milk-based pudding is similar to tapioca, and when you order it topped with fresh blueberries, raspberry compote and honey, you end up with a dish that’s surprisingly like a (very satisfying) yogurt parfait.

Toast
Black Dog Coffeehouse (12815 West 87th Street Parkway, Lenexa)
Whenever I find myself in Lenexa, I make a point to visit Black Dog Coffeehouse, a suburban gem that, despite its un-Starbucks-like feel, has no shortage of tables for getting shit done, and several cozy corners to hide with a book.

Don’t go into a summer-reading haze without ordering something from Ibis Bakery, though. The bakery next door to Black Dog supplies the coffeehouse’s goodies, and the menu includes an array of souped-up toast. The bread slices are more than an inch thick, and the available toppings include butter, peach jam, sea salt, cream cheese and pesto. My toast of choice involves cranberry-walnut bread spread with almond butter, honey and sea salt. The bread is soft and decadent, and the warm, blended toppings are a welcome reminder that the simplest snacks are often still the best.

Fruit Seedies
Mud Pie Vegan Bakery & Coffeehouse (1615 West 39th Street)
When Mud Pie opened, five years ago, a sign would occasionally pop up in the window facing the parking lot, reading: “fruit seedies.” Someone told me this served as a beacon to employees at other shops on 39th Street, letting them know that their neighboring vegan bakery had its homemade breakfast bars in stock that day. Now, Mud Pie serves its fruit seedies every day, for good reason. Packed with nuts, seeds and dried fruit, the bars are the size of small bricks, and they’re sweet, thick and chewy — somewhere between coffee cake and the best granola bar you’ve ever had. What’s a doughnut?