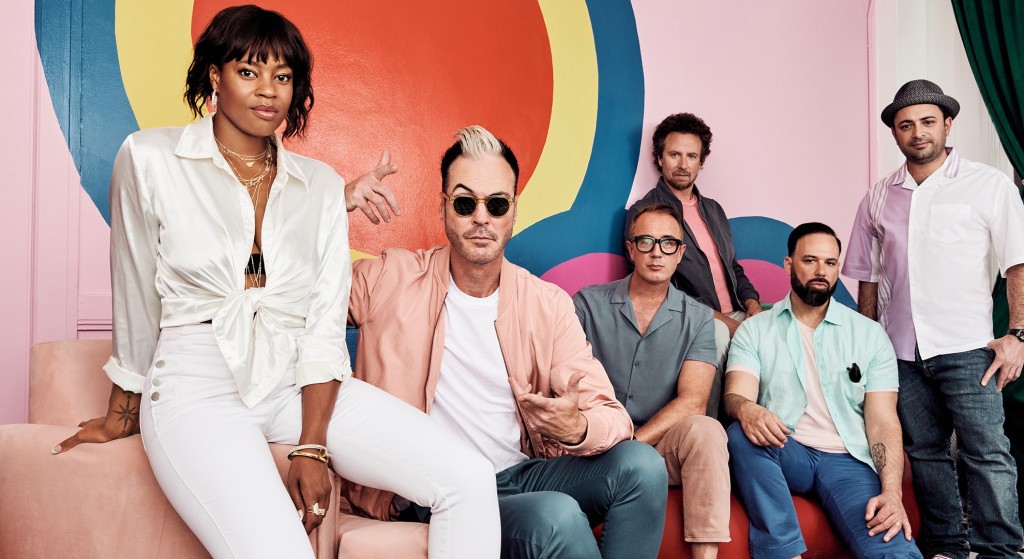 Fitz and the Tantrums. // Courtesy the artist

Fitz and the Tantrums returned for their third tour performance in Kansas City on Tuesday, June 21, this time co-headlining with St. Paul & The Broken Bones at Grinders KC.

Lead vocalist, Paul Janeway, didn’t have much room to move around on the stage, but he did briefly climb the scaffolding up to the slanted rooftop which housed the sound equipment. He showcased his impressive vocal range for about thirty seconds. On his way down, fans rushed in to take pictures of him with his hands hooked on the bars as his feet found the ground.

Guitarist Browan Lollar switched his guitar out at least three times, starting off with a blue, then a red, and finally a gold model that he alternated between songs. Bassist Jesse Phillips quickly shed the beanie that he began the show in, wiping sweat. Both he and Lollar got a chance to shred and shine during their solos. Each member of the octet was perfectly in sync throughout the performance.

There wasn’t a lot of crowd interaction, and Janeway mostly called out generalizations like, “I love you, Kansas City!” It’s always a safe bet here when every large crowd of Citians includes someone with a KC hat, shirt, or tattoo.

As one might guess from their name alone, St. Paul & The Broken Bones is full of religious symbolism and imagery. Their live performance was composed of hyped-up, dance music versions of guttural hymns. With weather like the wrath of God, the theme was fitting.

Grinders prepared for the heat with patio misters, coolers of water, and stacks of plastic cups for the taking. At least one person still fainted, as pointed out when Fitz and the Tantrums vocalist Noelle Scaggs called out for security to assist a heatsick fan.

The stage flooded with smoke and the stage’s overhead lights began to flicker erratically as Fitz and the Tantrums took the stage. Scaggs appeared on the tambourine, sharing the mic with Michael “Fitz” Fitzpatrick. The light was almost low enough so that only Scaggs’s silhouette was visible against the colorful backdrop. She maintained fluid, high energy throughout the show, lending a decidedly dancier mood to the second half of the night.

“Y’all are the hottest stage that we ever play on, everytime,” says Fitzpatrick.

The band performed crowd favorites like “Out of My League,” leading the crowd in rhythmic claps, synchronized waves, and forming the signature heart symbol with their hands at the end. Fitz and the Tantrums also took the opportunity to play some of the songs from their fourth studio album, given that they have not yet been able to perform them live, with the postponement of previous tours due to COVID-19.

Their newest single, “Sway,” was released last week, and the group performed it live for one of the first times for the KC crowd featuring Chad Fisher on the saxophone and Ben Griner on the trombone, which added to the jazzy and soulful sound.

Heat lightning in the skies caused some audience members to leave with caution, but despite the night’s early end, both bands delivered an electrifying show.