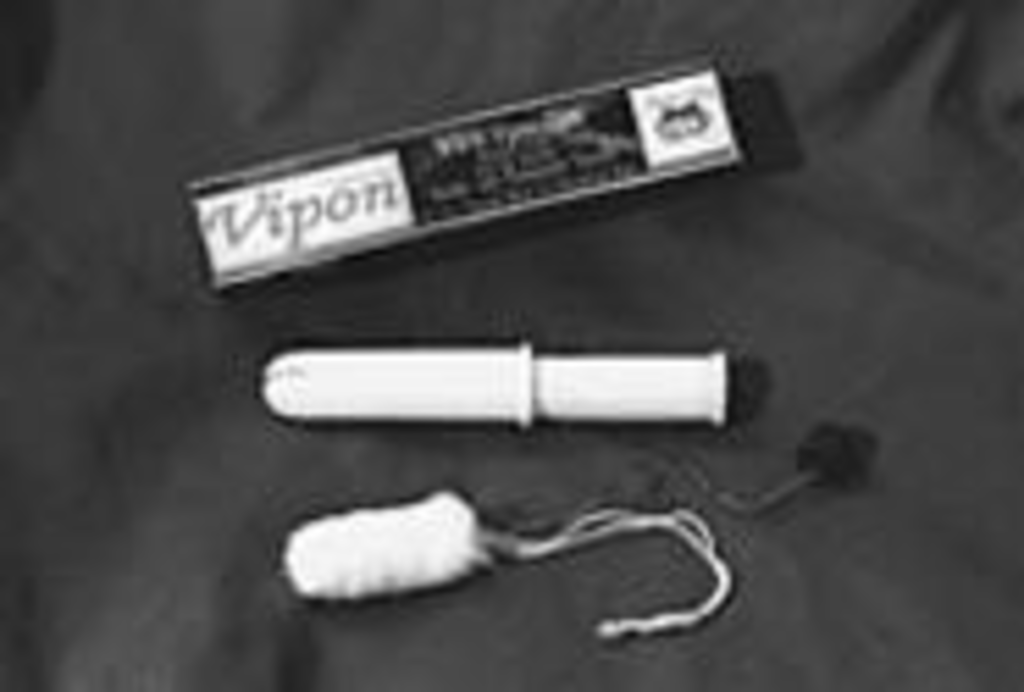 Steve Kilgore’s idea came to him one morning in 1987, when his pager suddenly vibrated on the coffee table, disturbing his wife, who had long suffered menstrual cramps.

“You son of a bitch!” she snapped, according to Kilgore. “All you ever think about is your job.”

Kilgore, a regional manager for a cable communications company, glanced toward his wife in the kitchen of their Raymore, Missouri, home as he reached for the vibrating pager. He spotted a box of tampons poking from a grocery sack. He wondered: Could a tiny, vibrating motor and a bundle of absorbent fibers offer a remedy for his wife’s pain?

Night after night, Kilgore toiled at his workbench. He experimented with store-bought tampons, hollowing them out and inserting motors he’d bought for $1 apiece from an electronics store. Finally Kilgore had a prototype. The makeshift tampon whirred gently in his palm.

“If this doesn’t help, I’m out of here,” Kilgore told his wife as he tossed her a tampon. About a month later, as Kilgore sat on the couch watching television, she appeared, beaming in the doorway.

“The thingie,” she replied. Kilgore made ten more, and his wife distributed them to colleagues at the insurance company where she worked. Kilgore says the women who sampled the purring tampon were instantly relieved of menstrual cramps.

He claims to have made about a thousand of them over the years. “You should sell them,” people told him. First, though, he had to come up with a name.

“Well, it’s a vibrating tampon,” his wife told him. “Why not just call it Vipon?”

In 1998, Kilgore obtained a patent. He has founded Another Way Products to manufacture the Vipon, which he rather ambitiously hopes to have in stores this fall. A Vipon six-pack would sell for more than $10, roughly what a woman would pay for an industrial-size bottle of pain reliever.

“If you take a bottle of Midol and a box of [Vipons], we’re pretty comparable,” says Kilgore’s chain-smoking patent attorney, Gerard Eftink.

Kilgore, a 46-year-old hippie throwback with long, wispy, blonde hair and wire-rimmed glasses, complains that it’s tough to enter the feminine-hygiene market, which he says is controlled by a “tampon mafia” of four major companies. Kilgore says that he once traveled to South Carolina to buy a tampon-rolling machine from a bankrupt diaper company, only to have a menstrual mafioso foil his efforts by getting it first.

“It was basically just a bastardized cigarette-rolling machine,” says Kilgore, who has since invented his own tampon machine. He showed the creation to the Pitch on the condition that it not be described, lest a reader duplicate it and begin rolling her own vibrating tampons for sale.

In a dim room at Kilgore’s duplex, the metal contraption sits unused. Soon, however, Kilgore says it will be cranking out 80 to 100 tampons a minute in preparation for Vipon’s upcoming market debut. The director of marketing for Another Way Products, Stacy Barbiere, says she is lining up investors and hopes to have the Vipon on the shelves of big-name retailers by November.

Although Vipon is patented as a “vibrating tampon,” Barbiere bristles at that description. “The Vipon doesn’t exactly vibrate,” Barbiere insists. “It pulsates.” She wishes to distance the “serious medical product” from the sexual connotations associated with vibrators.

The Milwaukee-based Endometriosis Research Center has expressed interest in helping to organize clinical trials for the Vipon. Endometriosis is a chronic disease of the reproductive organs that can cause pain before and during periods and during sex, as well as infertility and fatigue.

“There are no sexual benefits to this [pulsating] tampon,” says Barbiere, who uses the Vipon herself and says there’s nothing funny about it. “It’s amazing. It does everything and more. It’s shortened my period to a day and a half. We haven’t even begun to scratch the surface of the medical benefits that [the Vipon] has.”

In 1998, Kilgore enlisted the expertise of Dr. Kermit Krantz, 79, a semiretired gynecologist and professor emeritus of gynecology and anatomy at KU Medical Center. Krantz tested the product on eight women and concluded that it relieved their cramps with no adverse health effects. Krantz sits as medical advisor on the board of directors of Kilgore’s company.

“I think it has real merit. It takes the pain away,” Krantz told the Pitch. “The average girl today uses tampons. I think it’s a step forward. That’s where we’ve come in this industrial revolution.”

Kilgore says he has yet to come across a woman who didn’t appreciate Vipon’s pulsations. His Web site is loaded with compelling testimonials, though Eftink asserts that “women traditionally haven’t talked about the fact that they have pain during menstruation.”

“I was originally quite doubtful, believing it to be a joke,” writes one woman. “But after trying it, I was really pleased.”

“Strangely enough when I awoke this morning after using this device at bedtime, I felt the kind of physical calm and relaxing effect that I feel during and after I play my violin,” writes a 35-year-old woman from New York.

The big-talking Kilgore claims that his Web site (www.vipon.com) gets nearly two million hits a month and that a major tampon company once offered him $50 million for his patent. He also says that when he temporarily took orders online, 10,000 requests rolled in each day. He couldn’t fill those orders, so he stopped selling online.

Barbiere tells the Pitch that an investor actually offered $90 million dollars for the patent but backed down when it came time to put it in writing. She insists that the Vipon, made from organic cotton, is just as safe as the rayon-polyester blends put out by the big companies. In 2000, the U.S. Food and Drug Administration granted Kilgore permission to market the product.

Kilgore says his staunchest supporter is his wife, who has been free of menstrual cramps since her first Vipon fifteen years ago. On their recent wedding anniversary, she paid for Kilgore to get a tattoo of the Vipon logo (a hummingbird pollinating a purple lily) inked above his left nipple.

“When I tell men what I do for a living, they say, ‘What kind of idiot are you?'” says Kilgore. “When I tell women, they say, ‘I want one.'” Kilgore takes plenty of ribbing from other men for his “dainty tattoo,” but he is proud of the product that he hopes will be the best-selling tampon in America.

“I manufacture a tampon,” says Kilgore. “I’m not ashamed of it.”