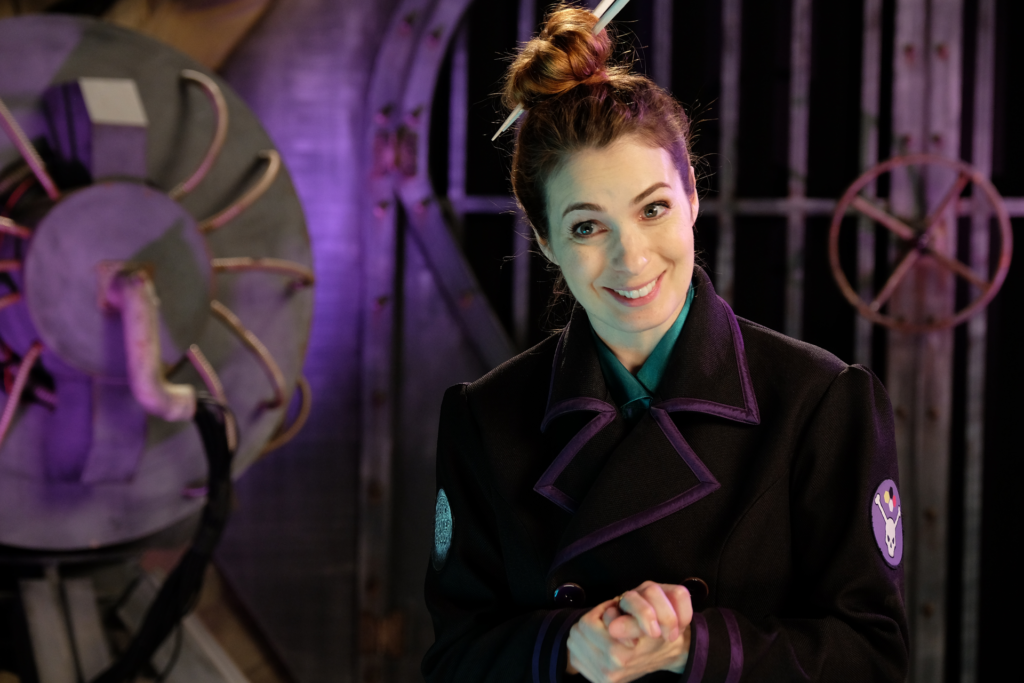 Felicia Day hasn’t reached 40 yet, but she has already conquered several types of media.

The actress teamed with Joss Whedon, the brain behind Buffy the Vampire Slayer and Marvel’s The Avengers, for Dr. Horrible’s Sing-Along Blog. In that 2008 web event, she played a woman pursued by both an aspiring supervillain (Neil Patrick Harris) and a pompous bully of a superhero (Nathan Fillion). And even as she has been steadily visible in commercials and TV shows (including Supernatural and Eureka), she has been her own best agent, creating, produced and starring in the six-season web series The Guild. That show, in which her character, Codex, and other neurotic gamers struggle with life on and off their computer screens, proved how web-based entertainment could transcend the cat video.

From Friday to Sunday, Day will meet fans at this year’s Planet Comicon at Bartle Hall. She called me earlier this month from California to talk about how YouTube has changed radically in a mere decade.

The Pitch: Because so much of your Supernatural character’s arc was based around The Wizard of Oz, I have to ask: Is this the first time you’ve actually set foot anywhere near Kansas?

Felicia Day: That’s correct. I have not been to Kansas, and you’re right, there were a lot of Wizard of Oz things. I believe she was born in a Midwest town. I believe it was Kansas where she used to live, but don’t hold me to that. It’s been a while since I did that episode, and I just had a baby, so it might be pregnancy brain. But it definitely sounds familiar.

You’ve just made your debut as one of the Mads, or mad scientists, in the Netflix revival of Mystery Science Theater 3000. How does Kinga Forrester differ from original Mad Dr. Clayton Forrester (Trace Beaulieu)?

Her father was a scientist, and I think she is more of a social scientist. I think her way to prove herself to her family lineage is more taking over the world media-wise, and money. That’s more her goal, versus [that of her grandmother] Pearl [played by Mary Jo Pehl]. It’s nice to have a different goal for each generation. It’s actually super-fun.

In Episode 4, if you keep watching, you’ll actually see that I have a duet with Neil Patrick Harris, which is a nice nod to Dr. Horrible. So evil science lives on!

You’re kind of a broadband pioneer.

Actually, this summer is going to be The Guild’s 10th anniversary. It’s kind of hard to think about being kind of the “Grandma of the Internet,” but the Internet moves so quickly, it’s kind of dog years in a sense. The Guild was one of the first web series that was scripted to be popular. I believe we were one of the first crowdfunded fictional video series, for sure.

The space is changing year-by-year. Five years ago, I started a company called Geek and Sundry, and we made TV-like videos. Then our budgets went down, so we had to make smaller video for a while. Now, it’s like people are investing TV dollars on the web, and they’re making bigger and bigger shows, and the little shows aren’t sustainable anymore.

The good thing is that web supports whatever niche you want to make content for — the more narrow the niche, the better. There are a thousand things that people can choose at any moment to concentrate on, whether it’s a book, a blog entry or a text message or a Tweet or a full-length movie or a web series. And that’s why I tell people who are creative, who don’t have huge followings, that you need to make something because you love it, not because you’re looking for praise or success. It’s very hard to break through, but if you do something only you can do, you have much bigger chance of it rather than just trying to be successful.

In your memoir, You’re Never Weird on the Internet (Almost), Joss Whedon gives you a lot of credit for the success of Dr. Horrible.

Dr. Horrible was started because there was a writer’s strike [in 2007] and Joss was not able to work on TV, so he had this project on the internet that he wanted to make for a long time. It enabled him to show you could make content outside of the normal avenues. And it was such a big success, partially because there was a strike and there was a lot of mainstream talent involved with that. I think it was kind of a perfect storm.

Your upbringing was unusual.

Yeah, I was homeschooled, and you can read about that in my memoir. I tended not to have as much contact with other children, but I think that helped me because it got me into things that people would discourage, especially girls, like video games, science-fiction and things that aren’t traditionally what you’d think girls should be interested in.

While you’ll be in the actors’ section at Planet Comicon, you’ll also be there as a writer as well.

That’s true. I’m a writer on Mystery Science Theater. I wrote all of The Guild episodes. I love being able to do more than one thing. I was producing, writing and acting. Even though I could advance farther in one area by concentrating on it, I’m just too interested in too many things to confine myself to one.

Are you doing anything to make sure your daughter follows in your line of work?

(laughs) You know, I just want to make sure she does whatever she wants to do. I will definitely offer her all the avenues and enable her to do whatever her talent and interests lie. One thing I do is dress her in nerdy T-shirts. I don’t put a lot of pink or dresses on her. That’s the only thing, I guess (laughs). It’s undue influence until she can make clothing choices for herself, and then she gets to wear whatever she wants.