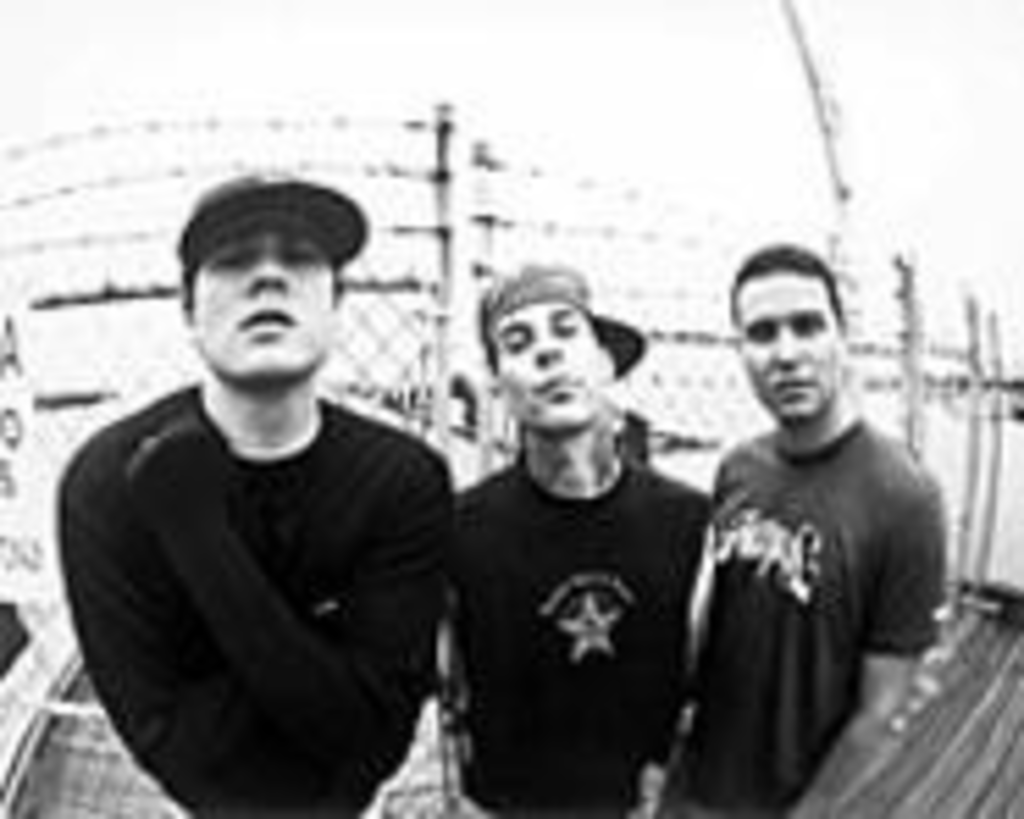 Symptoms include clammy hands, bowel obstruction and a compulsion to laugh hysterically whenever anyone says “bowel obstruction.” The early stages of Irritable Blink-182 Syndrome (IBS). Initial prognosis is good. The patient will head to college soon and put away childish playthings such as Blink-182. He will go through the Led Zeppelin stage, the Hüsker Dü phase, the Smiths. Much later, he’ll resort to yoga, mango frappés and Enya. Prescription: 100 milligrams of Valium and a copy of Led Zeppelin.

Synopsis: Conventional IBS treatment has proven unsuccessful. The patient responded well to “Communication Breakdown” when taken with a beer bong, but he prefers that Hüsker didn’t and refers to Morrissey as “that whiny little Limey bastard.” Symptoms worsened when Blink-182’s Enema of the State came out a month ago.

A long road looms. I have alerted the Centers for Disease Control about a possible IBS epidemic as people feverishly call radio stations to request “What’s My Age Again?” and “All the Small Things.” The patient is reduced to a tittering 13-year-old girl whenever the “Small Things” video comes on MTV. His condition is critical.

All is not lost, though. We have reached an important breakthrough. The patient is exhibiting signs of remorse. He has taken to rationalization as a defense mechanism, referring to the agonizing “Adam’s Song” as proof that Blink-182 has substance beyond bestiality jokes.

The patient’s delusions have created deep psychic rifts, but his recognition of the cognitive disorder is a positive milestone. And, as my therapist tells me, the first step to recovery is admitting you have a problem. Prescription: 500 milligrams of Ritalin and Velvet Underground With Nico.

Synopsis: The patient had progressed. He had skipped over Pavement straight to Joy Division. He was almost rehabilitated.

The turmoil between the patient’s id and superego has never been more apparent. Again, he tries to rationalize that “Stay Together for the Kids” is evidence that a band that sings about a guy who “rubs his dick in broken glass” can be taken seriously.

The patient fears physical retaliation if he openly admits to liking Blink-182. This is a worrisome sign. Heightened paranoia that somebody will catch you singing “First Date” in the shower is a sure-fire symptom of advanced IBS.

I fear a terminal condition. I’m irritated with his methodical dissertations on “Reckless Abandon.” I either doze off when he talks or play “MASH” on my notebook. I just married the Olsen twins, drove an Iroc-Z, owned a mansion, made $500 a year and lived in Mud Butte, South Dakota. Still, it couldn’t be any worse than listening to this jackass.

Synopsis: Any progress is for naught. The patient suffered a horrible relapse at a Blink-182 concert in Syracuse. He had joined the training-bra brigade in Allentown, Pennsylvania, the night before and admitted feelings of shameful anxiety. But he was just another leper in the colony, and the anonymity emboldened him for his most severe bout of “acting out” the following night.

The patient had come to the New York State Fairgrounds that night not for the Tilt-O-Whirl or the butter sculptures but for another Blink show. Following the band on successive tour stops is a typical sign of IBS dementia.

The patient duped security guards into granting him access to the floor level, but he was enraged to find chairs tied together with plastic cuffs where the mosh pit should have been. Fueled by passion and many, many beers, the patient incited the crowd to revolt. It didn’t work. So he charged forward to attempt an ill-advised stage dive. It didn’t happen. He was tackled by security and escorted out by police.

I would have been a good plumber. All I do is deal with other people’s shit.

I recommend the patient be committed to a secure facility for observation. Prescription: 1,000 CCs of horse tranquilizer and a viewing of A Clockwork Orange set to Beethoven’s Fifth Symphony.

Synopsis: I have concluded that the best treatment for acute IBS isn’t Blink-182 depravation but indulgence, not unlike methadone for smack addicts. I encouraged the patient to embrace his disease and listen to the new album Blink-182 repeatedly.

I found myself feeling this after listening to “Feeling This.” Our counseling sessions have become sweetly sorrowful “Miss You” singalongs that leave us both emotionally spent. The patient’s musical inferiority complex has weakened, and his paranoid ideation has also decreased significantly with the largely positive critical response to Blink-182.

What once was immature and irrelevant has become darkly alluring and devastatingly sweet. The patient feels no need to rationalize “Go,” “Down” or any other song on the album.

This is a groundbreaking discovery for IBS patients. Like herpes, there is no cure. But patients can still lead fulfilling lives. Note to self: Contact Psychology Today about publishing findings. Prescription: a mango frappé and Blink-182.

Conclusion: The patient’s IBS is in remission thanks in part to my brilliant advances in the field. I have been awarded a tidy grant from the Administration for Children and Families and have rewarded myself with a large OxyContin prescription.

The patient has silenced his demons through patience, spiritual counseling (Repent! January 22, 2004) and multiple spins of Blink-182. But the real test will come at today’s concert.

Barring any catastrophic digressions (the patient storming the stage to belt out a booze-fueled rendition of “Miss You”), it is my professional opinion that the patient is cured of IBS and no longer requires my services.