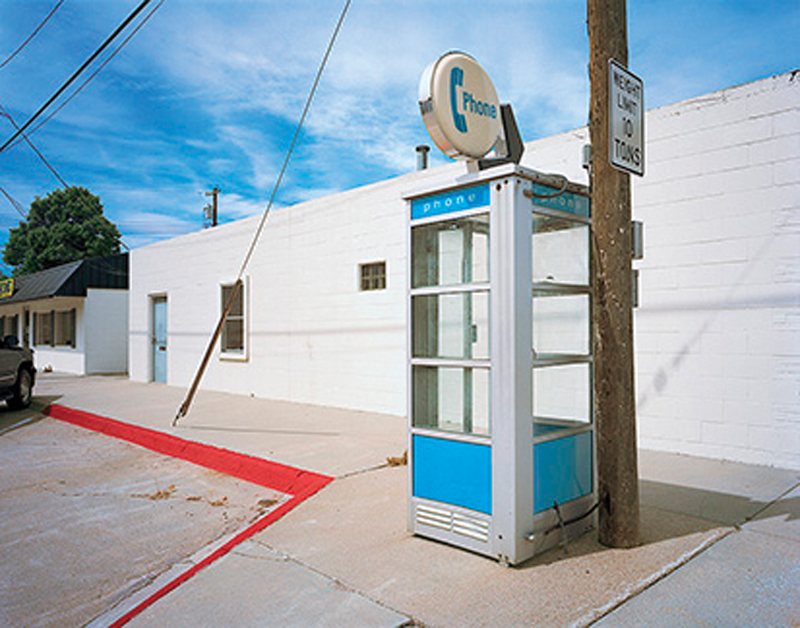 The Trump administration’s proposed budget is a right-wing hit list of the old school, including as it does the oft-recited wish to defund the National Endowment for the Arts. So when you hit the streets for First Friday on February 3, think about how much culture springs from the NEA — as well as from the similarly endangered National Endowment for the Humanities and the Corporation for Public Broadcasting — for just .02 percent of the federal budget. And look for artists beginning to respond to this troubled moment with a political edge that Kansas City arguably hasn’t seen in years.

Speaking of funding and politics, the Mid-America Arts Alliance (2018 Baltimore) shows a new ExhibitsUSA traveling show that takes exception to our traditional memory of World War II. Curated by Hal Wert, the Kansas City Art Institute professor who specializes in that conflict, the Cold War and Japanese literature, and has an extensive collection of election-related and other historic posters, Work, Fight, Give: American Relief Posters of WWII is open from 6 to 8 p.m. February 3, and then throughout the month by appointment. Learn about the National War Fund and how artwork was used to get people motivated to give to various relief funds.

Congress has expressed renewed interest in hacking up the Endangered Species Act, too, at a time when bees of various types have recently been added to the list of creatures facing crisis. Four artists who have been thinking about the plight of pollinators and their role in facilitating a huge part of the food chain are brought together at the Todd Weiner Gallery (115 West 18th Street) in Buzz. Coki Bijoux (a neighbor) is adding a selection from their bee (L’Abeille) collection of jewelry to complement mostly three-dimensional work by Steve Pistone, Jarret Mellenbruch and Dave Root. Pistone has created a giant honeycomb to attract the various wire-sculpted bees and flowers he’s made to illustrate the complex social structure of the hive, a departure from his wrapped-wire weaponry. Mellenbruch is still housing actual bees through his ongoing HAVEN series, which highlights colony-collapse disorder. Root imagines a future without honeybees, a favela of unsafe and overcrowded existence lacking in recognizable “society.” 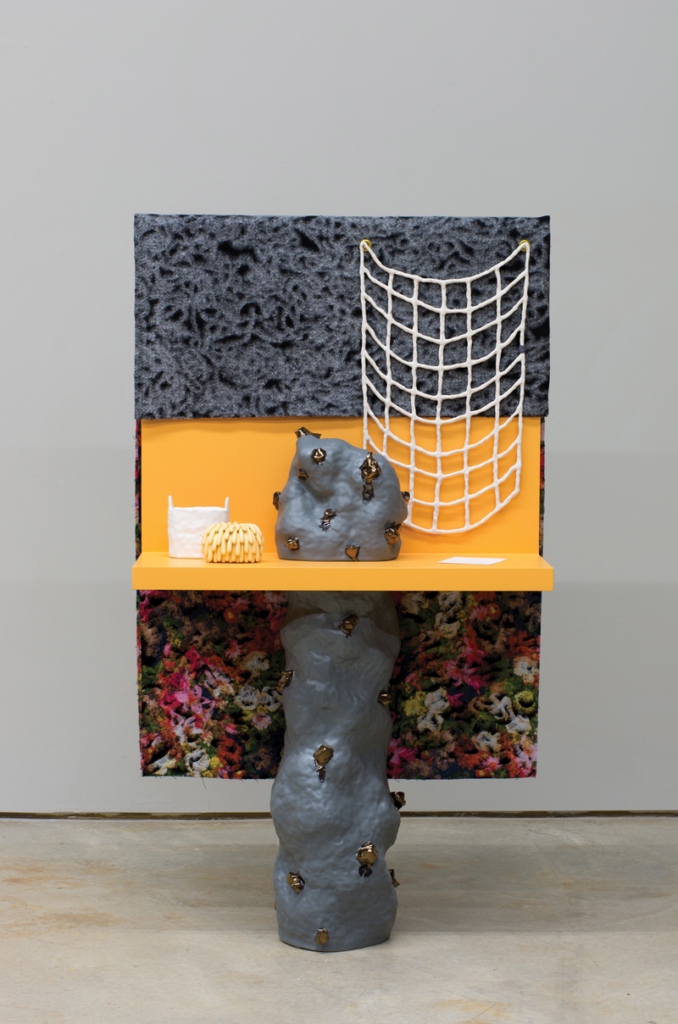 A Hard Swath to Mow: University of Arkansas Ceramics Faculty (pictured above: art by Linda Lopez)

Benjamin Cirgin, Jeannie Hulen, Linda Lopez and Adam Posnak each provide a different kind of window with their ceramic art to deal with the uncertainty of difficult terrain. Opening reception: 6-9 p.m.

Open 10 a.m. to 9 p.m. with a selection of colorful works by Derrick Breidenthal, Allan Chow, Chris Dahlquist, Kristin Goering, Anthony Benton Gude, Jenny McGee, Barry Osbourn and others. Gude (a grandson of Thomas Hart Benton) is preparing for a solo show at the gallery this fall.

The artist’s first solo exhibition of paintings and assemblages in three years showcases works made from 2014 through 2016 and reflecting the influence of travel, coupled with three decades of being rooted in Kansas City’s Crossroads.

First Friday at the library starts at 5:30 p.m. with music, snacks, activities and a view of the current exhibition in the Genevieve Guldner gallery (first floor), the first in a yearlong Every Street Is Charlotte Street anniversary celebration that includes showcases of work by past Charlotte Street Award fellows such as Rosser.

Along with the usual wide selection of contemporary ceramics, this month features lithographs by Leon Galub, Dennis Oppenheim and Ken Price, oil paintings by Kerry Smith, and photography by Nicholas Dhervillers. 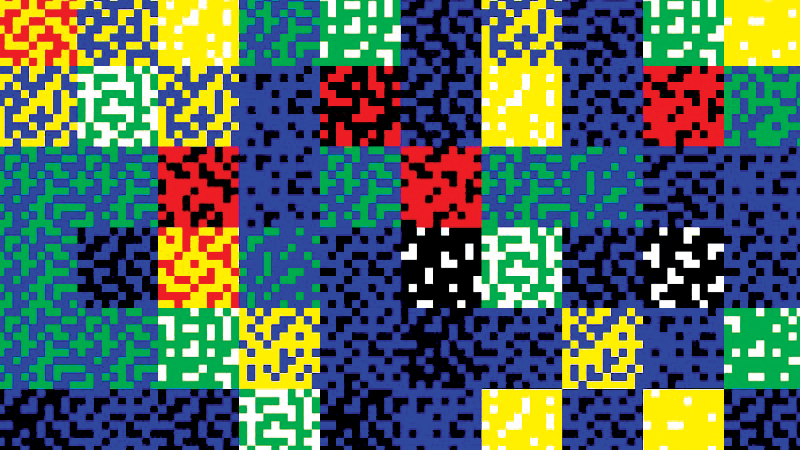 The Shape of Things: An Interpersonal Circumplex (pictured above)

A new collaboration by Kayla Mattes and Justin Seibert, loosely based on Timothy Leary’s “Interpersonal Circumplex,” explores personality through data collection. The Shape of Things is a 24-question quiz that generates a shape, which can be printed out and folded into a 3-D object. As with the algorithm quizzes on social media but with a tangible outcome, you can participate from afar, too, at circumplex.us.

The gallery is staying open late, until 6 p.m. (opens 11 a.m.) so you can get a chance to preview the dozens of works available in the annual auction, which is February 18.

Wonderland Remains: The Making of Bright Hopes! Photographs and Films

The lower-level gallery at Leedy-Voulkos is home to a three-year project documenting more than 50 musicians assembled as “Secret Siblings” to record songs written by Mike Crawford. New in the front gallery: works curated by Kenneth C. Burkhart of the Chicago Cultural Center, who has chosen photos by Kansas City Art Institute alumni whose careers span the “analog meets digital” divide of the 1970s: Chuck Avery, Jeff Burk, Don McKenna and Russell Phillips; artists will be present at the opening reception (6 to 9 p.m.). 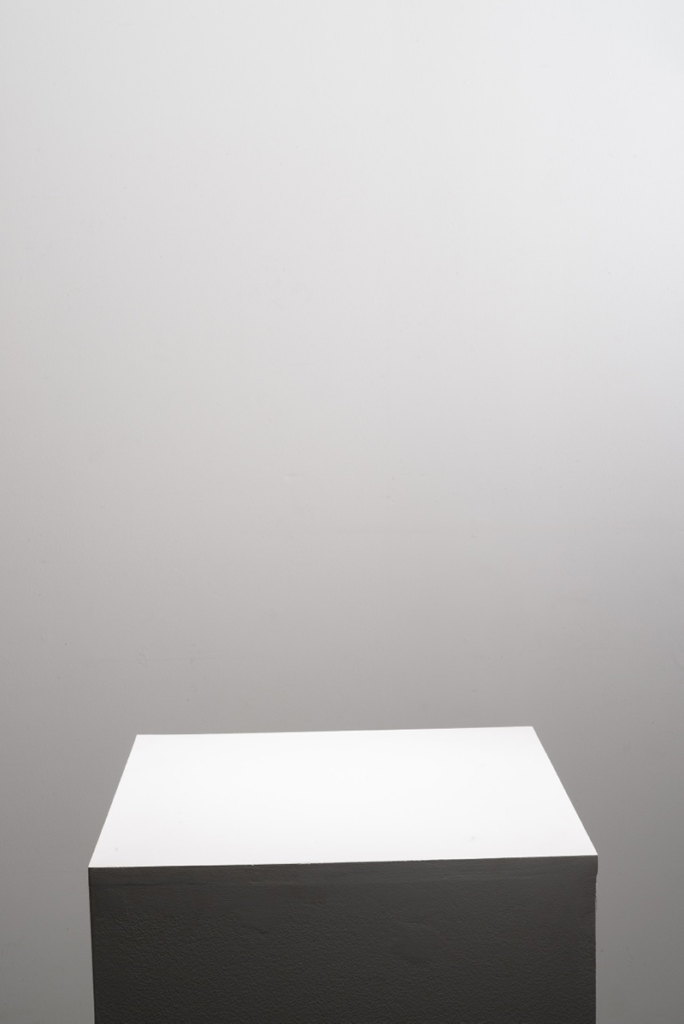 Sherry Leedy: The Weight of Light

Richard Learoyd: In the Studio

Organized by the J. Paul Getty Museum in Los Angeles, this selection of work by contemporary British photographer Richard Learoyd opens February 10, with one-of-a-kind direct-projection prints created with a room-sized camera obscura. A free lecture by the artist is set for 6 p.m. Friday, February 17; reserve tickets at nelson-atkins.org.