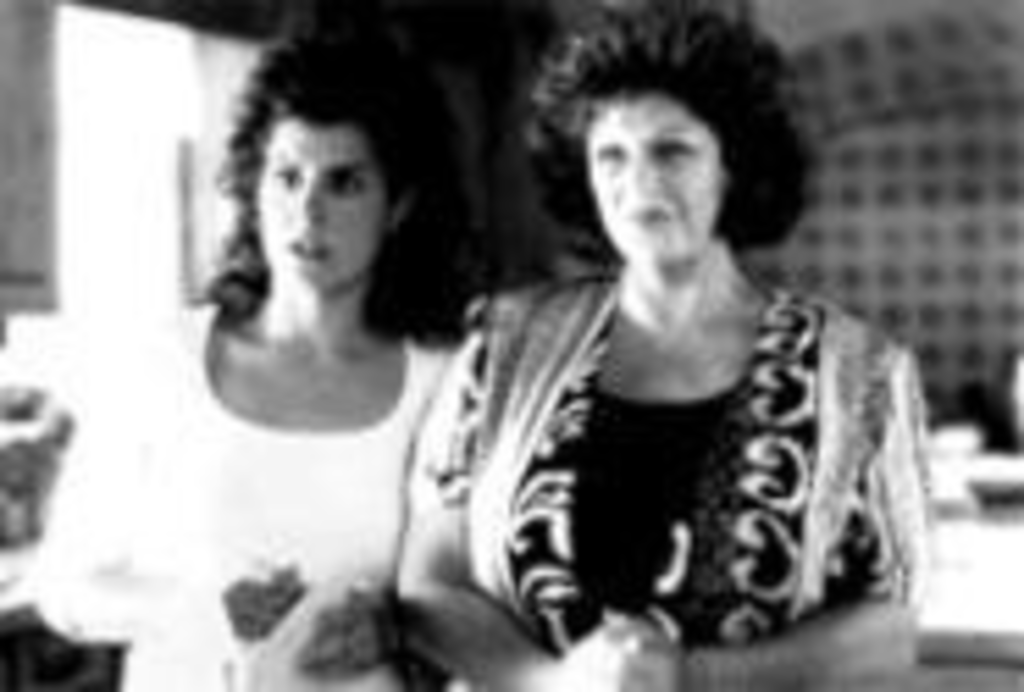 The biggest event to happen to television this year took place at the multiplex this summer: My Big Fat Greek Wedding, a one-woman show that has blossomed into a one-woman franchise. This spring, CBS-TV will debut My Big Fat Greek Life as a midseason replacement, featuring the entire cast of the movie save John Corbett—and good luck distinguishing it from the other loud and wack-cum-whacky family sitcoms currently airing on CBS, home to Ray Romano and Kevin James and Mike O’Malley and, soon, Cheech Marin, all lightly shaded variations on the TV-pop archetype as old as the medium itself. Even before Nia Vardalos’ surprise-hit film was released in April, CBS-TV had filmed a pilot called My Big Fat Greek Family, but it was scrapped once the movie became a $200 million hit and Vardalos became a wielder of estimable power: According to The Los Angeles Times last week, the writer-actor demanded a few changes, none of which are likely to make the thing actually good. But still.

The film, or what felt like a film you might find on old yogurt, was little more than an overblown, undercooked pilot; not since Birth of a Nation have so many stereotypes skittered across the big screen. But playing broad means attracting a broad audience; apparently nothing goes over better than a Jewish woman screaming at the top of her enormous lungs in a Greek accent to Middle American audiences who can’t tell the difference anyway. Which is why CBS can’t wait to get hold of My Big Fat Greek Paycheck; everybody loves Nia, especially the frau who likes her television safe, predictable and pre-chewed. There’s about as much risk attached to this series as there is bottled water, sex with yourself and John Ritter.

But the networks long ago gave up trying to break new ground when there are plenty of sitcom cemeteries still to be plundered. Look only at what the Big Four and Tiny Two offered up this season: dozens of series about cops and docs and loutish dads living with hot moms and cutesy-smarty pants kids imbued with the dim intellect of a roomful of Ivy League-trained sitcom writers raised on Roseanne and St. Elsewhere reruns. It’s tough to stomach the realization that the history books might one day acknowledge Jim Belushi as the most successful boy in that family. There were a handful of notable newcomers: NBC’s Boomtown, a show you can tell is really good by the scant number of viewers it’s attracting; Fox’s loopy Firefly, which is currently on hiatus and unlikely to return despite Joss Whedon’s name-brand value; and USA’s Monk, this millennium’s Columbo injected with neurosis and OCD (and ABC, which airs the show in reruns).

But more than anything, this was the season of the give-up, when networks offered pale shadows instead of substance. David E. Kelley had only himself to blame when Fox axed his girls club two episodes in; how couldn’t he have known three Ally McBeals would prove far more odious than one? NBC’s sticking with its must-avoid-TV brand by closing out Thursday night’s sitcom lineup with Good Morning, Miami, brought to you by the people responsible for Will & Grace, which is one gay joke away from having no jokes at all. (Cue new Will & Grace regular Harry Connick Jr.: If they ask me, I could write a book about the ways that show sucks.)

It figures the wondrous Bonnie Hunt’s finally enjoying success with her new ABC series; of all the shows she’s done, Life with Bonnie is easily the most mediocre. Someone insisted last week that Still Standing, starring The Full Monty‘s Mark Addy, isn’t so bad; wouldn’t know, as anything starring Jami Gertz and created by the writers of Yes, Dear isn’t allowed in the house. At least NBC’s offing Providence—it had better, damn it. It’s high time Fox likewise put an eraser to The Simpsons; the only people who find it funny work for the Hollywood Foreign Press Association and Entertainment Weekly, both of which are to journalism what cotton candy is to food. Other series in need of euthanasia: Friends, ER, every series named Law & Order that’s not Law & Order, C.S.I. but not C.S.I.: Miami (no particular reason), King of Queens, Frasier…and did I say ER?

And, please, stop fooling yourself: There is nothing pleasurable about such “guilty pleasures” as ABC’s The Bachelor, CBS’s Survivor franchise, NBC’s Fear Factor and Fox’s American Idol. (There’s something terribly wrong when a network makes a household name out of Kelly Clarkson, this week’s Debbie Boone, but buries Andy Richter and Bernie Mac in horrific time slots; Fox is the only network that’s ashamed of its quality shows.) These reality programs are little more than safe havens for the gluttonous, dull-witted and subliterate (and, OK, beautiful people); watching them you can literally feel your soul shrink, your life force disappear, your brain melt, your heart stop. We’re not far from a show in which people will be paid to scarf down their own body parts under orders from host Butch Patrick, fresh from his appearance on E!’s Star Dates. Speaking of which, the first week of the new year, Fox will debut Joe Millionaire, in which dozens of greedy whores (did I just say that out loud?) vie for the attention of a broke-ass jackass pretending to be worth millions. As it turns out, everyone’s willing to be disgraced for a little face time. If you watch Joe Millionaire, you not only deserve the television you get, but the stroke you’re about to suffer.

Television has no shame at any hour: This was the year Katie Couric and Today woke up extra early to play hardball with their competitors in order to land an exclusive interview with Jacqueline Marris and Tamara Brooks, the two California girls kidnapped and assaulted in June who went on TV not 24 hours after their rescue to share their story. It was the year ABC threatened to dump Nightline and replace it with The Late Show with David Letterman, whose audience is more likely to buy cars and movie tickets and beer than Ted Koppel’s. (Blessedly, Letterman was savvy and sensitive enough not to push Koppel from his slot; given his past behavior, Jay Leno probably would have shoved Ted down a flight of stairs hairpiece-first.) It was the year NBC gave Carson Daly his own late-night talk show, which is like giving an infant a chemistry set. It was the year Connie Chung and Phil Donahue returned to television and discovered audiences hadn’t returned to them. It was the year Bill O’Reilly proved they did save Hitler’s brain, and it was the year Barbara and Diane duked it out to interview Jennifer Lopez, Sharon Osbourne and Whitney Houston, the very brand of banal celebrity we were supposed to stop giving a damn about after September 11. And I’m pretty sure CNN is still replaying footage of Michael Jackson dangling his son from a hotel-room balcony.

It’s appalling, but not at all shocking, that most year-in-TV pieces appearing in Your Local Daily Newspaper have cited as their Top and/or Most Important TV Moment of 2002 The Osbournes and The Anna Nicole Show, both of which star “people” who clearly aren’t speaking in their native tongues. (Is “asshole” a language?) Anna Nicole Smith wasn’t even worth labeling a has-been by the time the geniuses at E! wrangled the drug-damaged plus-plus-plus-sized ex-Guess! model, yet the freak show gets major play in the midway nonetheless. As for Ozzy, the success of the MTV show about his pitiable life and pitiful family does indeed prove he’s made a pact with the devil, whose name apparently rhymes with “Sharon Osbourne.” Oh, and that constant beep-beep-beep you’re hearing isn’t the sound of curse words being edited out; it’s the sound Anna Nicole makes when she backs up.

Jules and Gedeon Naudet’s documentary 9/11, about the terror attacks on the World Trade Center, was the only bit of reality television that mattered in 2002. It made tangible those stories you heard about from a distance; it put you inside the belly of the beast, a place of business rendered towering inferno in a matter of moments. A story originally about the life of a young firefighter in an instant became the tale of a nation, and it rendered everything else on television this season a moot point (or, in Anna Nicole’s case, a moo point).

Cable rendered the networks positively obsolete, stealing away viewers at an astonishing rate; stats released this year revealed more than half the people with their sets on from 7 p.m. to 10 p.m. were looking off-network for their diversions. Tony Soprano and Larry David (two men who know a thing or two about losing their heads) provided the year’s best prime-time punch, Michael Keaton’s career was recovered from the lost-and-found on HBO’s Live from Baghdad, Jon Stewart was referring to White House spokesman Ari Fleischer as a “douche bag” on Comedy Central’s The Daily Show, lost gems such as Larry Gelbart’s United States and Robert Altman’s Gun were being rediscovered on the Trio network, South Park was dropping bombs over Baghdad, The Proud Family and Kim Possible were impossible to stop watching on the Disney Channel, VH1 was reminding a generation why I Love the ’80s, and Trent Lott was lynching himself on C-SPAN. Who says there’s nothing on?

“There’s plenty of room for good stuff—especially on cable, where there are hundreds of specialized stations willing to run the gamut from brilliance to abject crap,” says Robert Smigel, the voice of Triumph the Insult Comic Dog, who pooped all over Moby and got crapped on by Eminem at the MTV Music Video Awards last August. “But the networks seem to be retreating from even attempting the ‘great/risky’ stuff. I sense a move back toward traditional sitcoms and drama, amid a growing rationalization that ‘this is what people turn to us for.’ The thinking is, the specialized channels are for the specialized tastes; our job more than ever is to find the middle ground that pleases the masses. It’s a shame.

“In general, it’s true that there are a lot of cool shows that won’t work on a network and belong on Trio or Animal Planet or whatever, but for every 30 of those there’s always one that can succeed [on a major network] with a little trust and nurturing. I hope it’s still possible for a show like Seinfeld to get a real shot on a network. I hope they don’t forget that the biggest hits are often the product of the biggest risks. And if they do forget, I hope I can always afford digital cable.”

Yeah, yeah. For him to poop on.