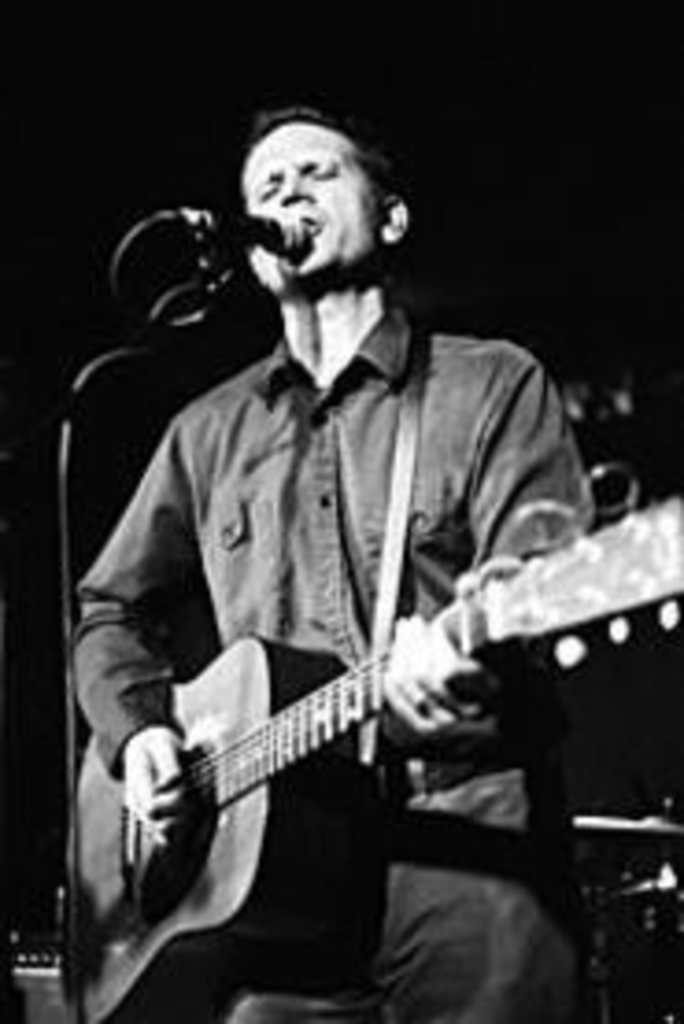 There’s something reassuring about seeing Rex Hobart and the Misery Boys sitting in a bar on the back cover of Your Favorite Fool, the band’s brand-new CD. The photo looks as if it were taken in a little corner of Nashville’s Music Row or maybe in a world-famous Prohibition-era Chicago dive — and then the clouds clear, and you realize that the guys are sitting at good ol’ Dave’s Stagecoach Inn. Never mind that there’s a Sunday morning sun streaming through the window or that some of the Misery Boys are sporting sure-enough-Sunday-morning eyes — they’re in a genuine Kansas City dive.

Though Hobart recently moved to Buffalo, New York, where his wife is currently “neck-deep” in graduate school, the Misery Boys are still very much a part of the Kansas City scene. Your Favorite Fool, the group’s third album for Chicago’s Bloodshot Records, documents a honky-tonk band that keeps getting better. Recorded with producer Pete Anderson (Dwight Yoakam’s guitarist) in his Los Angeles studio, where the band lived and worked pretty much nonstop for eight days, the new songs have a comfortable, lived-in feeling, even though the band was adding finishing touches until the last minute. Pedal-steel man Solomon Hofer recalls, “[Guitarist] J.B. Morris and Rex were still laying down vocal tracks on the night we were supposed to leave. As soon as they were done, we took off.”

“We wanted to record in a different environment,” Hobart adds. “We had a few dream names that we thought would be fun to pull a record together with. We gave those to Bloodshot, they did some calling around and Pete, our first pick, was interested.”

Hofer enjoyed working with studio engineer Sally Browder, known for her ability to make country guitars sound exactly right. “It’s good to work with someone who has the kind of experience she has,” Hofer says. “[This record] is hopefully defined by a little more grit, a little more guitar.”

Comparing this one with the previous two records, recorded with Lou Whitney at his Springfield, Missouri, studio, bassist Blackjack Snow says, “Recording it out in L.A. gave it a completely different vibe. With this one, we took a little more time — it was a little more relaxed. This is pretty much like we play it live. This is even more us.”

Morris seconds that notion. “We spent a lot of time doing little cool things to it, but to me it sounds very roomy — you hear the room in the recording. Everybody involved just agreed to turn it up and go for it. Somehow it came through just clear as a bell.”

Morris cites “Gotta Get Back to Forgetting You,” a chugging, rumbling, tempted-by-the-ex tune, as an example of what worked. “That’s a song that was written as a ballad years ago,” he explains. “We reworked it as a fast song. It’s got a dropped-D tuning, sort of a Merle Haggard feel. We’ll open a lot of the shows with that song.”

Hobart credits much of the band’s comfort level with the fact that writing began in the basement of drummer T.C. Dobbs’ mom’s house almost a year ago. “We tried to focus on playing the songs out live as much as possible before we recorded,” Hobart says. “When we got into recording, the process went smoother than it did before. I attribute that to the fact that we’ve been playing together for five years now, and we understand the kind of space each band member fills up — things we do well, things we can’t do yet.”

Hobart also seems content with his own work on the record. “With this one, I feel more comfortable singing,” he says. “I’ve tried to channel everyone from George Jones to Hank Williams Sr. on the past two records, and I thought, OK, I’ve done those things to varying degrees of success or failure, but this time, I’m just going to sing where it feels good for me.”

Hobart characterizes the band’s progression this way: “The first record, we just thought, let’s make a country record. On the second record, we were beginning to refine a little bit, come into our own as players, singers and writers. With this one, we thought, OK, we’ve done this a million times on the road, these are the songs — let’s just play them the way we’ve been playing them for a while.”

It helps that these are some of the best songs Hobart’s ever written. “More mature, I hope,” he says. He pauses, working to pin down the difference. “The songs that came this time … some of them are a little bit more about ideas rather than the twist of a word. It’s the mark of becoming a more subtle songwriter.” As Snow says, “His songwriting on this album is a little more personal — a little more real.” Hobart uses “Take It Back Before You Mean It,” one of the album’s highlights, as an example. “That one [has] a really simple idea, not trying to be cheeky or anything.”

“I’m the biggest fan in the band of ‘Let’s Just Call It Love,’ which is kind of an R&B song,” Hobart says. “But it’s one of the first positive love songs that I’ve written. It’s about faith, people saying, ‘You know, no one knows what love is, but this feels good enough to us. Let’s just make it be that.’ There’s a theme through the whole record — it’s about, ‘I’m going to hold onto this thing no matter what.'”

When the Misery Boys opened for Alejandro Escovedo recently, marking Hobart’s first post-Buffalo show, the band’s contentment was audible, despite a touch of visible travel fatigue. As the band played, its members picked each other up. More important, they pulled in a crowd that had bid adieu to Hobart only a week before. Reflecting on the difference in recent shows, Hobart says, “On the second record, we wrote all these ballads, but we found that when we were out playing them live, you can only do so many slow songs if you’re going to do what they’re there for, which is [to] have a good time.”

“The great thing about this band is that we’re always trying to figure out where we’re coming from or where we’re supposed to be coming from,” Morris says. “We’re always listening to the older country, trying to build our own little encyclopedia. There’s so much we haven’t heard yet, and each time we come across something cool, a George Jones record we haven’t heard yet or a Merle thing, we all soak it up, and soak it up symbiotically, so we’re picking up on some of the same things.”

“A major dynamic of this band has always been, ‘We don’t know what’s going to happen next week —let’s just keep playing,'” Hobart adds. The immediate next step is a nine-week cross-country tour, ending around Christmas. “Ideally, after the tour, we’ll settle down for the winter and get some new songs together,” Hobart says. “I’ve got a couple of ideas, and we’re going to work up at least one new song on the road. I’m hoping that will excite the guys and they’ll be into the long-distance thing.”

That seems like exactly what the Misery Boys are into. “[The touring] never gets old to me,” Hofer claims. “It’s so much fun to leave the day job for a while. You can’t have stars in your eyes or expect a big reward one day — you have to enjoy the process of what’s being done today.”

For the upcoming Kansas City shows, Morris promises all the things fans love — and more. “We’ll play all the songs on the record and pick and choose from the previous two,” he says. “We’re also going to throw in some covers, probably more than we’ve ever played, on this tour.” Morris also hints at a few visual surprises for the CD release party at Davey’s Uptown. “It’s going to be something that’s never been done before,” Morris says. “It’s going to look different than it’s ever looked.”

For now, though, the Misery Boys are right in the middle of a country band’s happiest paradox. “In spite of all the songs being predominantly about heartbreak and really sad stuff,” Morris says, “we’re having a great time.”