It was the second time in two days Sen. Holly Rehder tussled with members of the conservative caucus. 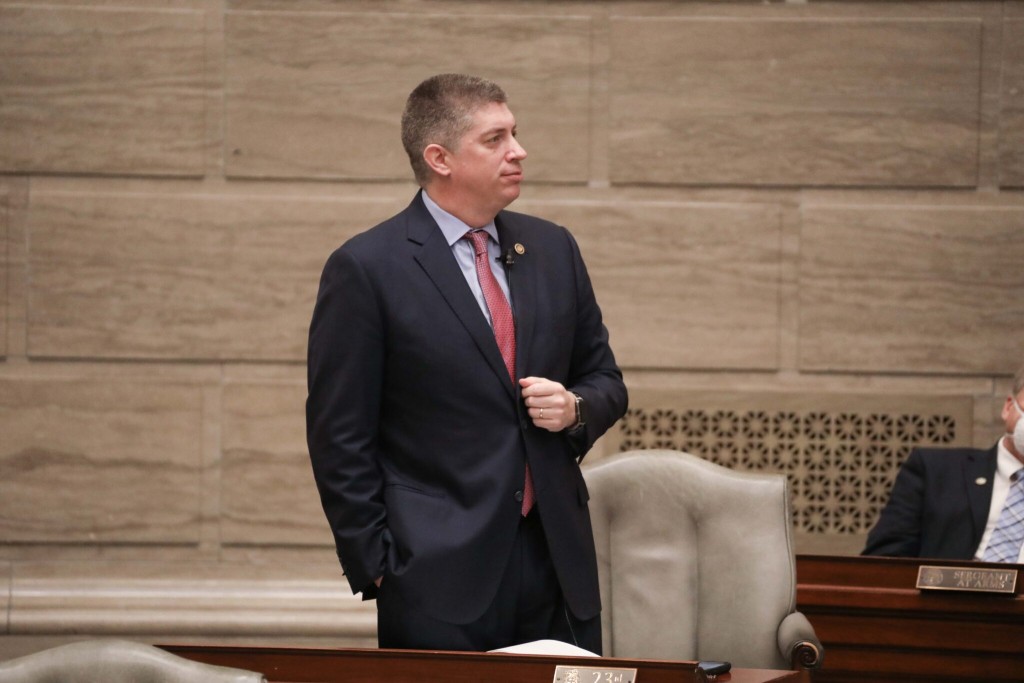 Wednesday afternoon, Sen. Bill Eigel, R-Weldon Spring, spent nearly two hours reading the bill, sponsored by Sen. Holly Thompson Rehder, R-Sikeston, line by line, decrying the size it had grown to and “all the subjects that have been plastered onto this giant Christmas tree of a bill.”

Hours later, when the bill resurfaced shortly before midnight, opposition quickly followed. Sen. Bob Onder, R-Lake St. Louis, made his intentions clear: “About 36 hours left in session. And this is what we’re doing. We’re gonna kill it on a conference committee report that’s not gonna pass.”

What started out as a bill to decriminalize needle exchange programs, which allow for drug users to access new syringes in order to decrease the spread of bloodborne disease, ballooned to 195 pages after dozens of amendments were added in the House.

Shortly after 12:30 a.m. Thursday, Onder unsuccessfully attempted to send the bill back to conference to add language to bar abortion providers and their affiliates from receiving Medicaid funds. A similar motion had yet to be voted on shortly before 3:30 a.m. when the Senate recessed until noon.

“To my constituents, that vote is by far more important than everything in this bill,” Sen. Eric Burlison, R-Battlefield, said.

Multiple Republican lawmakers noted they already limited funds from going to abortion providers through the state budget, and accused Onder of filibustering the bill because of personal animosities. Sen. Bill White, R-Joplin, who challenged Onder’s motion, said he was “tired of people bullying.”

“Most of the people in this room are fed up. Everybody in here knows who we’re fed up with,” Sen. Elaine Gannon, R-De Soto, said to Onder. “And you know what, you’re outnumbered.”

Despite the removal of numerous provisions that had garnered opposition — including one that would extend postpartum care to a full year for new moms — some Republican lawmakers still took issue with the bill.

When it first came up Wednesday afternoon, Eigel killed time reading aloud the bill’s provisions — restarting various times, including after reading from a Facebook post from Rehder.

“Here we go again!” Rehder wrote. “A few disgruntled Senators wasting what time we have left to throw fits because they aren’t getting their way.”

The opposition from the conservative caucus leaves Rehder’s bill with few chances to progress in the final days of the legislative session that ends at 6 p.m. Friday. During a conference committee hearing Wednesday morning, Rehder said lawmakers moved to strip some amendments that had been tacked onto the bill rather than try to come to a compromise on the language because there simply wouldn’t be enough time.

It was the second time in two days Rehder tussled with members of the conservative caucus. On Tuesday, Sen Bob Onder, R-Lake St. Louis, challenged Rehder’s bill to strengthen the Sexual Assault Survivors Bill of Rights, by questioning whether it would legalize prostitution of minors.

This week’s conflict is only the latest between Rehder and the conservative caucus. In March, she convened a press conference — attended by nine Democrat and 13 Republican senators — to condemn how the caucus tried to add controversial amendments to her bills.

“These guys can’t deal with the fact that I don’t let them push me around,” Rehder wrote in her Facebook post Wednesday.

Members of the conservative caucus have made their qualms well known in the session’s final days, with Eigel accusing senators of compromising their integrity on a sweeping education bill that had passed out of the chamber Tuesday.

Sen. Mike Moon, R-Ash Grove, took issue with the expansive scope of Rehder’s bill. Meanwhile, despite Rehder running through the bill’s changes, Sen. Paul Wieland, R-Imperial, said there wasn’t a detailed enough document available to understand a breakdown of what legislation had ultimately made it into the bill.

Wieland suggested Rehder should instead withdraw her motion to adopt the conference committee substitute and bring the bill back the next day.

“I think you have been doing this long enough to also realize that we don’t always have the time to put all that together,” Rehder said. “So I’m trying to be as helpful as possible.”

With senators originally expected to take up a proposed Congressional map Wednesday afternoon — and some already foreshadowing a contentious process ahead — it doesn’t bode well for other legislation to smoothly make its way to final passage.

Gannon, whose proposal to extend postpartum health care for new moms to a full year was removed from the bill, said she stood in support of Rehder.

“I think you are up there at the top with researching all the bills that you do before you bring them to the floor,” Gannon told Rehder during Senate debate, later adding: “I think this body for the most part, the majority, would support this bill and realize and understand, and they know, the amount of work that you have put into this bill.”

Rehder’s own family has battled with opioid addiction, and she has filed a version of a syringe access bill for the last seven years. It came close to passage last year, but similarly failed to pass in the session’s final week.

In the House, the bill grew to include numerous provisions this year, including to establish a prison nursery program, prohibit COVID-19 vaccinations for organ transplants and to prevent the type of visitor restrictions healthcare facilities imposed during the pandemic.

Rep. Phil Christofanelli, R-St. Peters, and the bill’s House handler, had warned on Monday that loading the bill with amendments would likely doom the bill’s chances — a prediction that appears to be proving true.