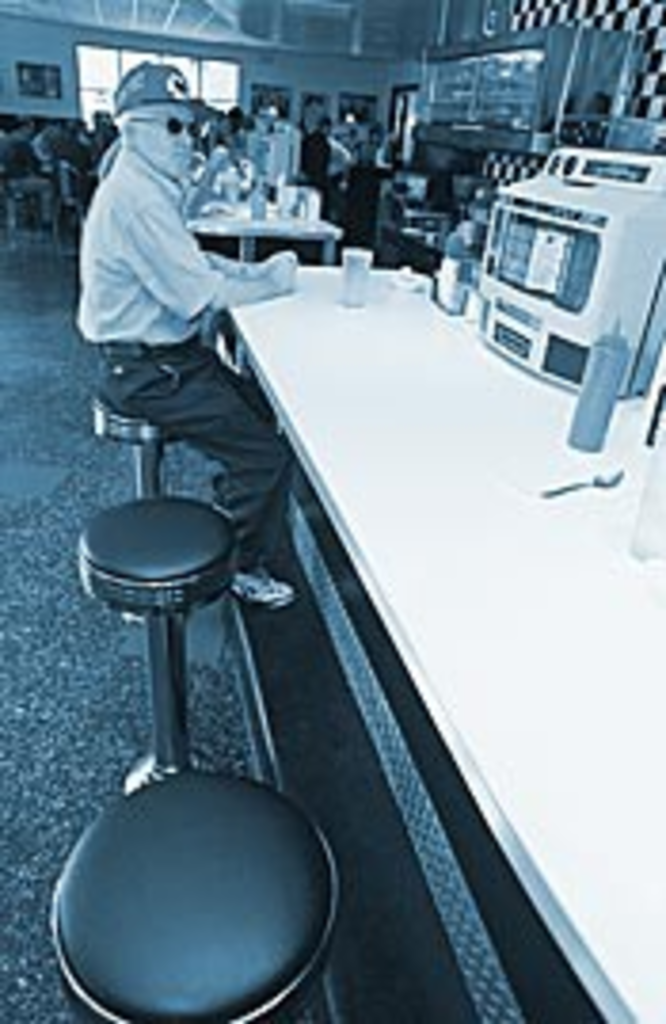 There are a lot worse places you could be at 3 a.m. on a rain-slick night than Chubby’s, staring at a big white china plate of crispy tater tots and a cup of steaming java and wondering who in the joint — which is surprisingly crowded — wasted a quarter to hear Patty Duke sing “Don’t Just Stand There.”

“What … what … what … what’s on your mind?” Patty was warbling as the cowboy in the next booth, a middle-age man squeezed into a pair of tomato-red pants and a muscle shirt, lit up a cigarette and quietly sang along. Here’s what was on my friend Bob’s mind as he dipped a fried-chicken tender into a little dish of ranch dressing: “This place may be new, but all the old weirdos are here.”

In midtown, no one ever needs to go hungry after midnight. Since the “new” Chubby’s opened last month in its own brand-spanking-new building just a block south of its old location, the number of 24-hour restaurants in the neighborhood has increased to three. The venerable Nichols Lunch anchors the southern point over at 39th and Southwest Trafficway, and Sidney’s, in the old Chubby’s spot in the Barclay Building (3623 Broadway), occupies the northern outpost.

For nine years, from 1989 to 1998, the LaBruzzo family — which owns the other Chubby’s Diner, a 13-year-old “burger and breakfast” joint at 1835 Independence Avenue — served up signature sandwiches (including “The Big One,” a half-pound of ground beef served with cheese, onion, pickles, tomato, and lettuce) and inexpensive breakfast platters in the storefront space that had been, in previous decades, a popular diner called Sidney’s (which has no affiliation with the current Sidney’s). The LaBruzzos unwillingly left the Barclay Building when they lost their lease.

“We got thrown out,” says Nick LaBruzzo. “The landlord wanted to put his own restaurant in the place.”

But the “Big One” is now back on Broadway, at home in a bigger, light-filled space with sparkling linoleum floors, pristine white ceilings, and a youthful staff of servers in black T-shirts, many of whom are still a little wobbly in the art of juggling a busy station during the lunch and dinner hours. The restaurant seems perpetually understaffed, although the novitiate waitresses remain friendly and upbeat, even as they dash from one table to the next repeating the mantra: “I’ll be with you in a minute.”

“We’re still getting things together,” LaBruzzo says apologetically. “A lot of our old staff has come back, but we’re training a lot of kids.”

The menu is nearly the same as the old place’s — and so are the selections on the new taupe jukeboxes at each booth. The musical repertoire reflects the Cold War era Chubby’s tries to re-create in decor and culinary style: Go ahead and eat a dinner of crispy chicken-fried steak in cream gravy ($6.76) while Jo Stafford sings “Shrimp boats is a-comin'” or a hot beef sandwich smothered in brown gravy ($4.50) to Lesley Gore’s pouty “You Don’t Own Me.” At Chubby’s, it’s almost possible to believe that time has stood still and that the Vietnam War, the sexual revolution, Watergate, AIDS, the Gulf War, and Britney Spears never happened.

But take a peek through the window at the scene just across the street — the late-model cars and SUVs pulling into the busy McDonald’s parking lot (where hamburgers cost a little less but don’t taste nearly as good) — and the fantasy bubble bursts. The ’50s and early ’60s are over, and neither the frosty chocolate malts ($2.30) brought out in silver metal shakers and plastic “glasses” nor Dusty Springfield’s greatest hits are ever going to bring them back.

Not that Chubby’s doesn’t try. The best dishes here are the traditional breakfast items (such as the best-selling country ham and two eggs for $4.70) and cholesterol-laden suppers (a mom-style meatloaf dinner for $5.50) that have been diner staples since the beginning of the last century, when a New Yorker named Pops Tierney made his fortune creating counter-style restaurants inspired by railroad dining cars. Before Pops died of acute indigestion in 1917, writes John Mariani in America Eats Out, “he was a millionaire, and by 1925, his company was manufacturing one diner a day.”

Mariani notes that the diner boom lasted until “fast-food chains proliferated in the 1960s and ’70s.” Chubby’s is a diner in style — it has a counter with shiny chrome stools, cozy booths, a glass-front pie case — even if the place looks more like a Wal-Mart than a railroad car. But the tradition of an all-night diner, the kind immortalized in Edward Hopper’s 1942 painting “Nighthawks,” lives on. In the 1940s you paid for your dinner in cash, and it’s the same story at Chubby’s today — it’s cash only, but LaBruzzo says he’s installing an ATM later this month, so plastic-holders can easily get the green stuff.

And a couple of modern menu items seem to have been inserted in a halfhearted attempt to be hip, but the restaurant’s enthusiam for them just isn’t there. The cappuccino ($1.25) costs 30 cents more than a regular cup of coffee and arrives in a white china coffee cup, frothy and teeth-gratingly sweet. “It tastes like melted candy,” said actor Ron Megee, laughing after he took a sip of my amaretto-flavored brew, which tasted like a packaged mix blended with hot water. “But it does have a kick to it.” The LaBruzzos also added a veggie burger ($3.50) to the sandwich list, and LaBruzzo says he’s “selling a lot of ’em. People either love them or really hate them. There’s no in-between.”

Put me in the hate-them category. I’m usually a fan of soybean-based or tofu-style burgers, but the Chubby’s creation is one of the most unappetizing and tasteless concoctions I’ve ever seen: a glop of griddle-browned rice and mushroom bits slopped on a soft hamburger bun. It looked like something from the prison dining-room sequence in Jimmy Cagney’s White Heat. I tried disguising it with the tomato and onion slices, but it was just too awful; I wished I had ordered one of my old favorites, such as the freshly grilled patty melt ($3.50) or Chubby’s nonethnic but satisfying version of the Reuben sandwich ($4.25), thick with tender corned beef, melted provolone cheese, and lots of Thousand Island dressing.

When Chubby’s is good, it’s very good. The sandwiches, including the brand-new pork loin ($2.35), are seductive comfort foods — they’re big and nourishing, and when you’re eating them you don’t give a damn about calorie or fat counts. And when Chubby’s is not so good, you just shrug and push the dish away. Nothing’s so expensive here that you can’t afford to order something else. During one lunch visit, my skinny friend Jon gobbled up a “delicious” chicken-fried steak dinner — the cubed steak was “bigger than the plate and the same shape as Texas.” He loved the heap of mashed potatoes and the crusty little croissant that came along with the meal, but he sniffed at the accompanying “vegetable of the day,” a little dish of soggy carrots, beans, and potato cubes that looked as if they had just been spooned out of a pot of too-long-simmering soup.

This was the same lunch visit that I finally ordered a bowl of Chubby’s Original Chicken Soup ($1.95), which has big, fat egg noodles and a savory broth that really is comforting and tasty, even though I didn’t see much meat in the bowl. But, hey, this isn’t Café Allegro. It’s Chubby’s, the no-nonsense place where you can choose from among six kinds of potatoes (from hash browns to potatoes O’Brien) to go with your eggs and bacon and you can either slather your toast (white, wheat, Italian, or rye) with jelly from one of the little plastic tubs stacked on the table or order cinnamon toast ($1.15), just like my mom used to make.

There’s something comforting about knowing that Chubby’s is open almost all the time (it closes from 2 p.m. Monday to 6 a.m. Tuesday for cleaning) and that if I get a little craving for a slab of sugary chocolate cream pie ($1.85), a greasy chili burger ($2.35), and a cigarette at 5:33 a.m., the lights are still on and Patty Duke is wondering what … what … what … what’s on my mind.