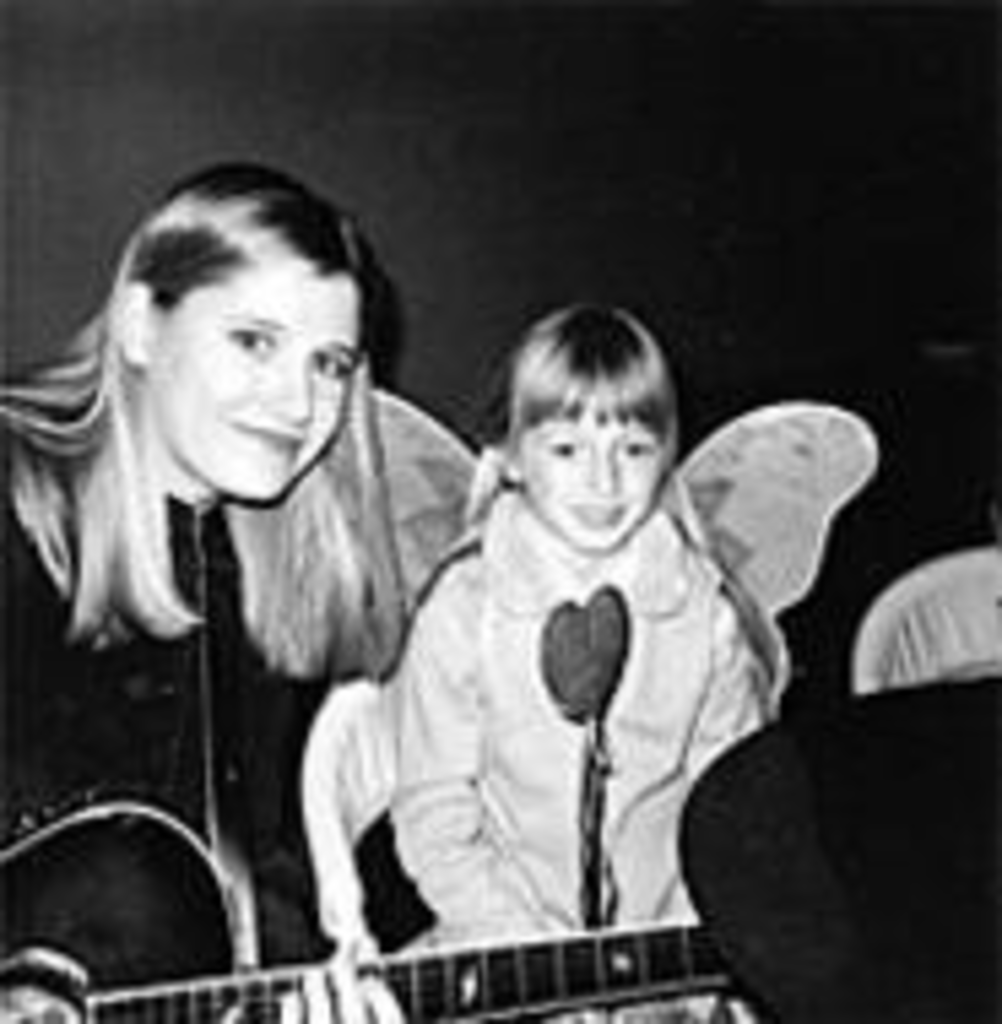 Often, effective art carries the burden of discomfort. From the brilliant yet cringe-inducing film Happiness to J.M. Coetzee‘s punishing yet poignant novel Disgrace to Elliott Smith‘s diary entries set to song, such works force people to confront unpleasant issues, the kind of ugly human truths that they usually turn to entertainment to help them avoid.

On the local front, no musician addresses a broader emotional spectrum than twenty-year-old Corinna, whose three discs convey wildly different moods. After Chasing the Ghost, a confessional debut that dealt with her father’s death and her battles with substance abuse, she returned with The Deeper You Go, the Higher You Fly, an extended love poem with arrow-pierced hearts dotting every “i” and “j.” Swelling with full-band arrangements and bursting with longing, it was an album that could make listeners sigh blissfully or snarl, “Get a room,” depending on their capacity for vicarious romantic enjoyment. But when Corinna’s muse abruptly left the area, leaving behind only an unsentimental message that contained no forwarding information, she suddenly had to face the situation posed in hyperbolic hypothetical form in The Higher You Fly‘s title track: I wouldn’t know what to do/If I lost you/I wouldn’t know how to live/Within the absence of your kiss/And I wouldn’t know how to fight/Without you in my life.

Corinna answers with Bless the Child, unofficially a concept record about alienation and deep betrayal. Eschewing the other musicians, who seemed vaguely intrusive on her previous public display of affection and who would seem like heartless trespassers on this stark collection, Corinna takes her acoustic guitar-playing and songwriting to a new level. “Raining in My Heart,” with its resigned, subtle chorus and neatly wrapped conclusion, might be her best composition yet. “Blue”‘s erratic rhythm conveys the nervous tension of waiting by the phone for a call that might never come, and “Don’t You Lie to Me” replaces her wounded-angel delivery with an appealingly husky accusatory tone. Lyrically, however, Bless the Child is so bleak that listeners might occasionally feel like awkward guests at a dinner party that ends unceremoniously with a bitter shouting match between the host couple. A typical passage: He took my heart/He had it in his teeth/And he devoured it with such ease.

It would be easy to picture Corinna as Corey Flood from Say Anything, strolling around at parties with her guitar and wailing Joe lies/When he cries. Instead, Corinna writes her songs within what she calls a “faerie ring,” a circular structure within her bedroom decorated with sticks, stones and pictures of Tori Amos. Corinna places song titles into envelopes, then meditates on them within the faerie ring, with prolific results. It’s not unusual, she reports, for her to compose ten songs in a single night.

However, Corinna’s creative core does not neatly confine itself to these circular sessions. “I’m constantly hearing a voice singing a song,” she claims. “It’s actually kind of haunting. They come when I’m eating or sleeping or watching a movie, and I’ll have to leave the theater and go home and put it on record. Otherwise, they won’t go away.”

Corinna’s children, as she calls her songs, don’t always nag her about her defunct relationship. Bless the Child‘s scope extends to “Damaged,” a harrowing account of Corinna’s gang-rape at age fifteen. They made me dirty that night/They made me bleed/They passed me around/But my screams made no sound, she sings, her voice trembling with delicate power. Lyrically, it’s her most impressive achievement, one that deserves to be mentioned in the same sentence as its inspiration, Amos’ “Me and a Gun.”

“When I saw her perform that song last October in New York, it was the first time I allowed myself to cry about [the rape],” Corinna says. “My heart had been cut off from the entire incident. Tori taught me to be more comfortable with my anger.” Corinna met Amos after the show and revealed her plans to exorcise her own demons through songwriting. “I told her, ‘I deal with my pain through music,’ and she encouraged me and gave me her blessing.” Amos also gave Corinna an autograph, now a sacred fixture in the faerie ring, which reads “With warm waves, understanding and wings on Kansas.”

Like Amos, Corinna hopes to serve as a leader by example to other musicians who would like to convert their troubled times into accessible art. Through her Web site, corinnafugate.com, she’s already received scores of e-mails from fans who have related deeply personal experiences. “People like to unburden themselves to me, which I find to be an honor,” she says. However, after receiving several e-mails with suicidal overtones, Corinna decided to include links to organizations such as the Amos cofounded Rape, Abuse and Incest National Network and the Suicide Awareness Voices of Education in an attempt to direct people in especially dire situations to trained professionals.

With her desire to mentor other, often younger musicians comes responsibility, which is why Corinna scrapped her own suicide-themed creation. “People are starting to listen to what I have to say, so I can’t just be like, ‘Let’s all kill ourselves now.'” A now-common sight at Corinna’s shows drives home the need for restraint: Young girls attend in faerie costumes. “I’m just worried that the guys will start wearing the wings,” Corinna says with sincere concern. “I don’t want them getting beat up.”

In addition to avoiding harmful messages, Corinna includes traces of optimism on Bless the Child. “Angels in the Bar,” a tribute to divine chaperones for the lonely, offers hope to the alienated, and “Caged Bird” is a staunch statement of self-reliance that contains lines such as I’m going to give myself a try this time.

Strong as her resolve might be, Corinna still struggles with reproducing The Higher You Fly‘s sticky-sweet conversation hearts at post-break-up shows. “I wrote those songs at a time when I was truly in love for the first time in my life,” Corinna says. “Every time I sing” — at this she breaks into song, her voice fragile as she coos You’re the one that I’ve been waiting my entire life for — “onstage it’s so ironic, so surreal. But I have to play them; they’re my children.”

Corinna continues to give birth to new songs with rabbit-like prolificacy, revealing that she delivered her latest spawn, “Breaking Me,” at 3 a.m. the night before her interview with the Pitch. Eager to show off the kids wherever she can find a showcase, Corinna balances bar appearances with coffee-house gigs, even though the former pose some problems. She’s already past the irony of being a recovering alcoholic playing at nightclubs. But venues such as the Hurricane, where she played on January 27, aren’t exactly welcoming to singer/songwriters. “It was all hell,” Corinna says of that show, noting that she took solace of sorts in an eager fan who did the robot, among other inappropriate dance moves, to her heartfelt expressions of woe.

She hopes to find a better reception in New York, where she’ll be playing for several weeks later this spring, sharing crowds with bands she met on the Internet. In the meantime, Corinna will continue to bare her soul at low-key local venues such as the Westport Coffee House, where she stops on Friday, February 8. Even in such an intimate setting, her most recent songs might draw listeners painfully close, but Corinna says the revealing route was her only option. “It was the hardest album I ever had to write,” she admits, “but it would kill me if I kept it inside any longer.”

Among the luminaries at 2002’s shindig, which sprawls out in vintage KC fashion from downtown to South Kansas City on February 12: velvet-voiced Ida McBeth at Suzi’s, miracle-working showman DC Bellamy at Club Paradox, harmonica master Brody Buster at the Blue Room, reigning dean of local blues Millage Gilbert at the Hitching Post and socially conscious lyricist/children’s book author Billy Ebeling and his Late for Dinner Band at Danny’s Big Easy. For a map depicting the entire happy trail, which encompasses 21 clubs, as well as information on many of the performers, visit kcbluessociety.com.