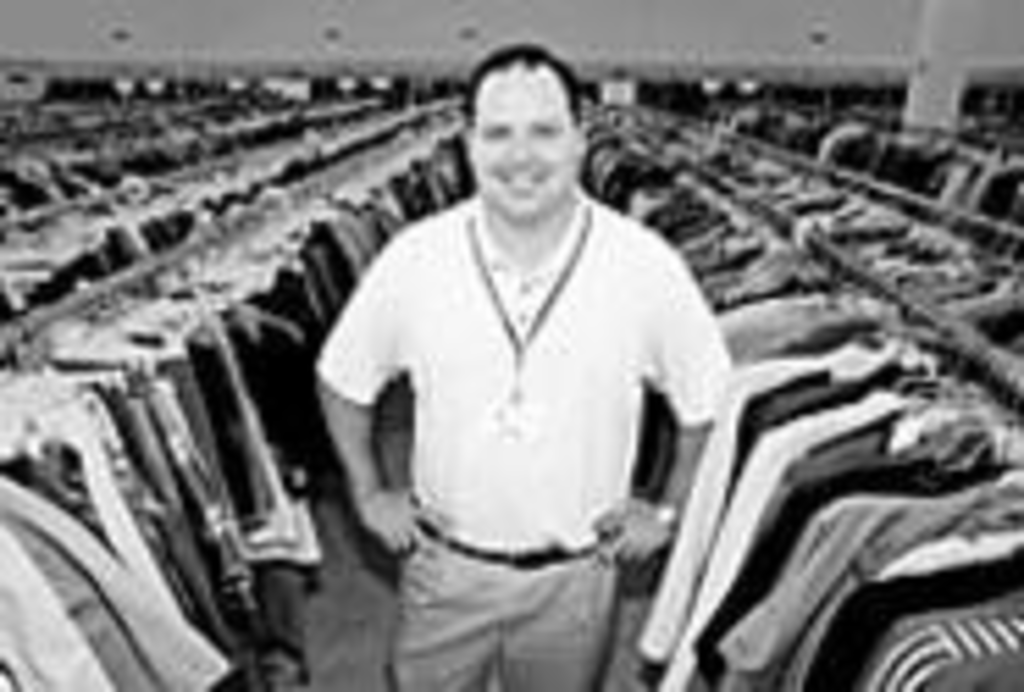 Last fall, Tom Dooley, who’d been working for only a few months as Goodwill Industries’ head of market development, got a complaint from an irate thrift-store shopper.

“I went to your store looking for a ’70s outfit to wear for Halloween, and I couldn’t find anything,” the caller griped on Dooley’s voice mail.

Dooley took it as a compliment. Not long after, he got another complaint that pleased him: Someone sent a note lamenting the lack of grime at another Goodwill thrift store. “Your store wasn’t dirty enough,” Dooley says the customer wrote.

Last year, Larry Jones, president and CEO of the Helping Hand of Goodwill Industries in western Missouri and eastern Kansas, hired Dooley to give Goodwill a new image and open 33 new stores in 5 years. Dooley knows something about makeovers: He’s a former division manager and buyer for the high-end retail chain Nordstrom. The seven Goodwill thrift stores in the Kansas City metro once provided a prime shopping destination not only for poor people but also for thrift-store junkies, who enjoyed delving into dusty piles in search of weird knickknacks and kitschy ties. Now, Dooley and company are ruining their fun.

In March, Dooley announced that by the end of that month he would close the Goodwill store at 77th Street and Wornall Road, an alcove dimly lighted by flickering fluorescent bulbs and crammed with old couches with gold, orange and brown upholstery, mismatched plates and utensils and sad-looking leather shoes. The store had been in the neighborhood for about 15 years. Store manager Melody Brunson spent two of those working for a meager $10.50 an hour, but she loved her job. Several customers told the Pitch that Brunson was a stellar employee. But Dooley told Brunson that Goodwill’s policy mandated that she’d have to reapply to get her job back at a new store.

With her carrot-colored hair and nose ring, Brunson might not feel at home in the new brand of Goodwill store. “I think they’ve upscaled it,” she says. Brunson wasn’t happy when Dooley told managers that all clothing had to be sorted by size and that items should be displayed neatly on shelves near prominent signs. “I think people like things to be a little messy,” she says. “That’s part of the fun of thrift stores.”

Dooley, who favors pastels and bright, airy spaces, disagrees. “People don’t have the desire to walk into a place that’s dark and smelly and looks unfriendly,” he says.

The Helping Hand of Goodwill Industries covers 79 counties in eastern Kansas and western Missouri. It’s part of a co-op of independent organizations across the United States and in 24 other countries, so Jones was relatively free to make decisions about local operations. He says he wanted to expand the organization’s employment services. To do that, he needed more money. So he says he switched to “an aggressive style of management.”

In the year before closing the Wornall store, Goodwill shut down two other Missouri stores — one in North Kansas City and one in Independence. The organization closed the 6,000-square-foot Vivion Road store and quickly opened a 33,000-square-foot outlet across the street. Dooley promised he would also try to find larger retail spaces in Independence and open a new store within four months, but so far that has not happened. He tells the Pitch he is “actively looking” for a new space in Independence and plans to open a new store within a mile and a half of the old Wornall location within 120 days. In the meantime, Goodwill has opened a “million-dollar store” (expected to bring in $1 million in revenue by its second year of operation) in Olathe at 135th Street and Mur-Len Road as well as stores in Bonner Springs and Leavenworth.

Maud Wahlman, an art professor at the University of Missouri-Kansas City and frequent Goodwill shopper (she says she enjoyed stopping at the Wornall Goodwill on her way home from work to find “artistic things”), organized a petition drive to try to keep the Wornall store open. She says more than 200 people signed, but that didn’t sway Dooley.

He maintains that the store on Wornall wasn’t doing well because it was too small and didn’t have a dock for donations. He adds that it had lost $11,000 in the two months before he closed it. But Brunson says the store’s business began suffering only last winter, when Goodwill stopped allowing it to accept donations from people in the neighborhood and instead had it stocking items that hadn’t sold at other stores.

Wahlman says she’s waiting to see if Goodwill will really open another store. “If they don’t open another one, people are going to be very unhappy with them. They have a responsibility to the community,” she says.

Despite the rumblings from dissatisfied former customers, the top managers at Goodwill are thrilled with the changes.

At the Olathe store, shoppers are greeted with bright blue, green and yellow walls. Over the loudspeaker, a silky voice interrupts elevator music with an assurance: “Here at Goodwill, we want you to have the best shopping experience possible.” There, customers can browse “departments” — including a huge furniture section full of new-looking solid-wood tables, pristine couches and big-screen TVs; a sporting-goods section stocked with skis, mountain bikes and golf clubs; and an antiques section full of ancient Singer sewing machines, old school desks and vintage cameras. The Nieman Road store in Shawnee now has a “bridal salon.”

Donors motor up to drive-through donation lanes, dump unwanted items and speed away faster than they could have picked up Big Macs.

A happy side effect of locating its thrift stores in the suburbs has been a noticeable increase in the quality of donations — Armani suits, Bassett furniture and Ralph Lauren bedspreads. Recently a donor dropped off five slabs of Italian marble, purchased on a trip abroad, and a customer snapped it up for $2,700, Dooley says.

“We want to make sure we provide the highest quality, and by putting our thrift stores in neighborhoods like Olathe, that allows people to buy a label in our stores,” Dooley adds.

Dooley says he tries to instill the Nordstrom customer service motto — “not a problem” — in Goodwill employees, and he’s changing the way the stores run, authorizing each store to sort its own donations. He has made the prices uniform at all of the area stores, organized the merchandise by category, had the walls painted in bright colors and worked with Nolan to educate shoppers about how their purchases pay for programs. When Dooley discovered that some employees didn’t know where the money went, he began showing up at the stores with $20 bills, awarding them to employees who could recite Goodwill’s mission statement: “To serve persons with disabilities and disadvantages by maximizing their vocational potential and to make available low-cost clothing and merchandise to the community.”

Dooley and Nolan took store employees to the regional Goodwill headquarters at 18th Street and Campbell, an odd building that’s half 1920s architecture, with glossy hardwood floors, and half ’70s add-on, with aqua walls and tiled floors. They toured the space for the Homeless Job Hunters’ Program, a bustling room where participants can collect mail, check their phone messages, freshen up with trial-sized mouthwashes and disposable razors, and share job leads. For job interviews, Goodwill provides thrift-store clothing vouchers and free bus passes. Nolan says about 350 homeless people have found jobs so far this year. In a room down the hall, workers who have had traumatic brain injuries shine hangers for a dry-cleaning company. In another workshop downstairs, employees with less severe disabilities handle small projects, such as assembling promotional kits or counting out hardware pieces and putting them in bags. Goodwill also employs disabled workers at its thrift stores.

The new philosophy seems to be paying off — for Goodwill, at least. Over the past year, Jones says, revenues have grown 37 percent. Dooley’s goal is to increase them by 115 percent by 2008.

But those numbers have yet to impress former customers like Wahlman. She hasn’t seen the new Olathe store yet because she’s not willing to make the drive.

“It’s just too far. People aren’t going to go all the way down there,” she says.