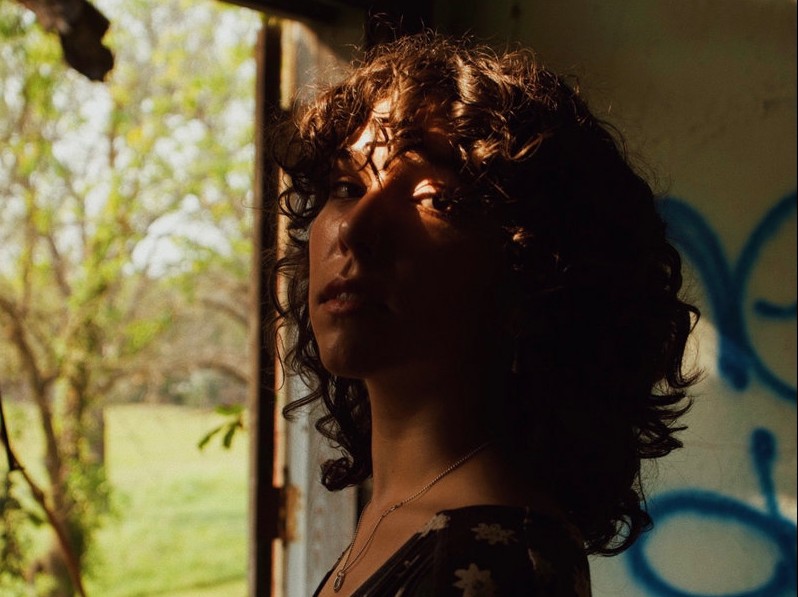 Lawrence-based musician, Faith Maddox, is known for her soft and clear voice that rings over finger-picked guitar melodies. The math rock and folk-influenced artist released her first album in February 2022 after a series of EPs. Now, about to venture overseas, Maddox is gearing up to play her last local show for the next few months.

As fans of her work, The Pitch began corresponding with Maddox to discuss her recent release and more ahead of her farewell (for now) gig on July 23 at Manor Records.

The Pitch: Congrats on releasing your first album, Subtle Hauntings. After previously releasing three EPs, what inspired you to create an entire album?

Faith Maddox: After my last EP, I knew I wanted my next release to be a longer project. Throughout the fall of 2020 and early into 2021, I wrote around fifteen songs and noticed recurring themes and images in each of them. However, I didn’t feel solid about their cohesiveness as a single project until the summer.

I was simultaneously working on my honors thesis, which explored how manifestations of trauma infiltrate the quotidian and render it into something more surreal and otherworldly. Subtle Hauntings was the original name for my thesis, but I ended up using it for this project because I felt it was a unifying moniker for an otherwise haphazard collection of songs about mortality, violence, and–to some extent–love.

You play the guitar, bass, and vocals on your recorded album for Subtle Hauntings. Have you been playing with a live band since its February 2022 release?

I played with a live band for a few sets this past spring but have otherwise been playing solo sets since early June. I enjoyed that experience, especially because I love the people I got to play with, but I’ve been reorienting the project under my name towards a more ambient and stripped-down sound for the time being.

Your music tends to be beautifully raw and emotion-provoking. Have you run into instances where a song was so vulnerable that it was hard to perform?

Oh, absolutely; they all feel too vulnerable to share with anyone at certain points. The track “tulips revisited” is one I rarely perform live for that reason. It’s written around my experiences with sexual violence and PTSD, intertwined with lines from the Sylvia Plath poem for which it’s named.

That was the first song I wrote for the album, and I think it has a much more ominous tone than the rest of the tracks. Anytime I play it, I am inundated with everything I felt while writing it, like my body literally jumps back in time and the air around me changes to the point where I can barely stay present. I am very conscious of how melancholy my songs are in general. With that one, I am wary of throwing those feelings or images onto an unwitting audience at a bar.

You recently graduated from the University of Kansas. How have your studies in English and Creative Writing influenced your music?

My music is primarily lyric-driven, and I can credit my growth as a songwriter to all that I learned in the creative writing program. I’ve always been a voracious reader and often get inspiration from what I read. That was only amplified because of the assignments I was given, and I often found a lot of overlap between what I was working on for school and my songs.

Last Fall, one of my final courses was on climate change literature. By the end of December, I had already written a concept EP that explored issues of environmental degradation within the framework of the southern gothic genre. That is still unrecorded/unreleased, as are many of my songs, but I hope to continue building on that someday.

How do you think your music will grow outside of academia?

I’m looking forward to redirecting the time and energy I used to put towards school into my artistic endeavors. That alone will benefit my music and what I’m able to create. Still, I think that orienting my life around art and the spontaneity I couldn’t get in a heavily structured environment will also allow me a new perspective on writing.

You won the 2022 Langston Hughes Award for poetry; do you find that your propensity towards poetic writing shows itself in the cadences of your music?

I hope so! I enjoy the challenge of fitting lyrics into the instrumentals I write, and it’s an endlessly satisfying puzzle that marries together the two things I can’t live without.

I focus on curating every minute and second of the listening environment, questioning how certain syllables complement different melodies and how that affects the song’s overall tone. I am inclined towards imagery above all other literary devices. I often write the guitar parts around an image or feeling before piecing in the words that explicitly describe the scene.

All of it is poetry to me. In a way, I think the melodies I write are as much a part of my poetic ethos as the words themselves.

Different pieces of literature have inspired several of my songs. Two of them are named for novels by Haruki Murakami, my favorite author throughout late high school and early college. I particularly enjoyed the process of writing “sputnik sweetheart,” which is based on the novel by the same name.

I include several images and lines from the book that parallel the personal experiences to which my song pertains, and it was funny to see just how close some of those parallels were. Often when I write songs that reference other works, it’s a case of wondering if life imitates art or vice versa, and I love seeing the back and forth there. One of my unreleased songs includes lines from the Book of Revelation.

I want to do more concept work based on the Bible in the future, as a lot of my artistry is based on my early experiences with religion and my transition into a different kind of spirituality in adulthood.

You have been promoting your upcoming show as the last chance to see you perform before you head abroad. What awaits you abroad, and when can we expect to see you back in the local scene?

Who knows what’s waiting for me abroad–that’s part of the fun to me, not knowing in a way. That’s the point of my journey. I’ve spent every second of my life before this planning out my next step, pursuing a path that was never mine to begin with. After I released Subtle Hauntings, I had a full meltdown.

I looked around at my life and realized that none of what I had planned was what I had wanted and that I was at a crossroads. I couldn’t recognize myself amidst the life and self I had created for other people. So, I decided to take this trip and try to reconnect with my intuition, to see who I am away from everything I know and who I could be apart from other people’s expectations of me.

I moved around almost every year growing up, so starting over like this isn’t totally new. Sometimes I worry I’ll never be able to settle down into one place or oneself. In some ways, I don’t think that’s natural. The only things I have booked are my ticket and a place to sleep for the first eight weeks. After that, I’ll do what feels right.

I’ll be back in Kansas sometime in November, at least for a while. I’m not allowing myself to make any real decisions until I’m on my trip. Nonetheless, I’m sure you’ll hear from me while I’m abroad. I have a lot of audio files I ought to clear out of my hard drive!

Subtle Hauntings is available now on Bandcamp and all streaming platforms. Faith Maddox plays with Rue at Manor Records on Saturday, July 23. Details on the show can be found here.