Exclusive: The Freedom Affair’s “Move On” showcases the scope of what this soul powerhouse can do 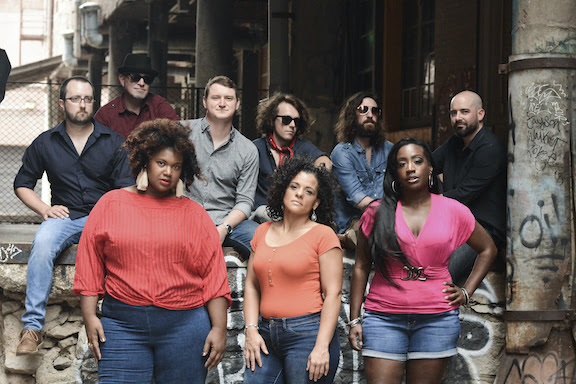 The Kansas City soul powerhouse which is the Freedom Affair releases their debut full-length, Freedom Is Love, next Friday, September 25. It takes the strength and scope of their first single, “Rise Up,” released last year on Colemine Records, and expands upon it. The Freedom Affair has created an album which is very much of the modern age, while still sounding timeless enough to fit in alongside your Curtis Mayfield and Marva Whitney LPs.

Ahead of next week’s Sunflower Soul release of Freedom is Love, we’re proud to premiere the album track, “Move On,” featuring vocalist Paula Saunders. It’s a massive song, and one which really showcases the full scope of what the Freedom Affair is capable. Check it out below, and read my interview with the band’s bassist and co-founder, Chris Hazelton, as well.

The Pitch: What does the Freedom Affair allow you to do, as a musician, that your more straight jazz work, such as the Boogaloo 7, doesn’t?

Chris Hazelton: The main difference here is that The Freedom Affair is largely a collective vision. Boogaloo 7 is mostly my thing. The musicians in B7 are all incredible and the chemistry between us makes it, but behind the scenes, I’m the one selecting/writing the material. Also, I think Boogaloo 7 has had like maybe 4 rehearsals in the span of our 7-year existence. HA! In contrast, The Freedom Affair is all writing and crafting songs together. And pre-COVID, we were rehearsing constantly to refine and sharpen both the songs themselves and the live show aspect.

When and how did the band come to be — I can only imagine that, given its size and scope, it took a minute to find the right folks?

Dave [Brick, drummer] was moving back to KC in 2017 after a 15-year stay in Oakland where he was the drummer for The Grease Traps. His buddy in that band, Kevin, suggested that he look me up because he’d heard some of the Sunflower Soul stuff. It turns out that the Grease Traps’ 45 on Colemine was one of my favorites at the time. So, Dave sent me an email in the dark (we didn’t know each other prior) and we connected over that and later got together to jam/hang when he got in town.

He kinda cast a vision for a funk/soul group with 3 female singers that could interchangeably sing in unison, harmony, or individually and we both kinda chuckled knowing how difficult it would be to find one, let alone three lead singers that would fit the bill. Just before that I had produced a single for Instant Karma! and Cole [Bales, guitar/sitar], Branden [Moser, guitar], and I shared a love for the current “retro-soul” stuff that was coming out, so they got invited to the next jam with Dave and me.

The horn players, Brett [Jackson, sax] and Pete [Carroll, trumpet] are both guys that I had worked with a lot in Boogaloo 7 and other various situations, and I just knew they were the right guys. Shortly after that, I was playing a gig at the Nelson that Misha [Roberts] and Paula were singing on, and I mentioned the idea to them. Misha mentioned her long time friend, Seyko [Groves], and that she was also a great writer. So, it really did just kinda magically come together piece by piece over the course of like, 3 months.

How’d you come to work with Colemine Records for the single release of “Rise Up”?

I met Terry Cole in 2014 when he made his infamous cross-country record store tour, pitching Colemine in person to any record store he could find on the map. He’s been a great source of help/wisdom/inspiration for me over the past few years. When The Freedom Affair had about 5 tracks fully recorded, I sent them over to him to check out and he asked me about putting “Rise Up” out on Colemine, and of course, I was geeked about it. Having their reach on the song has really propelled us into crowds on an international level that we might not have reached otherwise.

Tell me a little about “Move On” — that talking blues in the middle, for example, is CLASSIC.

I’ve always been enamored by big show-stopping numbers that get stretched out, get the crowd involved, and the dynamic woman in front gets to “preach” a bit. Tina Turner was an inspiration for this, but Sharon Jones was primarily who I had in mind when writing this for sure. And I really wanted to write a song where the woman was like “Boy, you messed up and I don’t need you anymore”. Paula took it and absolutely ran with it. She is incredible and DESTROYS this song live. I love the version on the record, but this tune is meant for the stage!

You mention that you wrote that song, in particular. Where do the songs all come from?

Everyone in the band is writing in some capacity. Some songs have been written by all of us getting in a room and creating together, but most of them have one or two primary writers and then when they’re brought to the table, they get picked apart, added to, and sometimes scrapped altogether! There is a real love within this band and for this band, so we’ve all been able to put our individual egos/sensitivities aside and know that we’re trying to build something incredible together. We’re all pretty excited to get this record out and see what happens next!