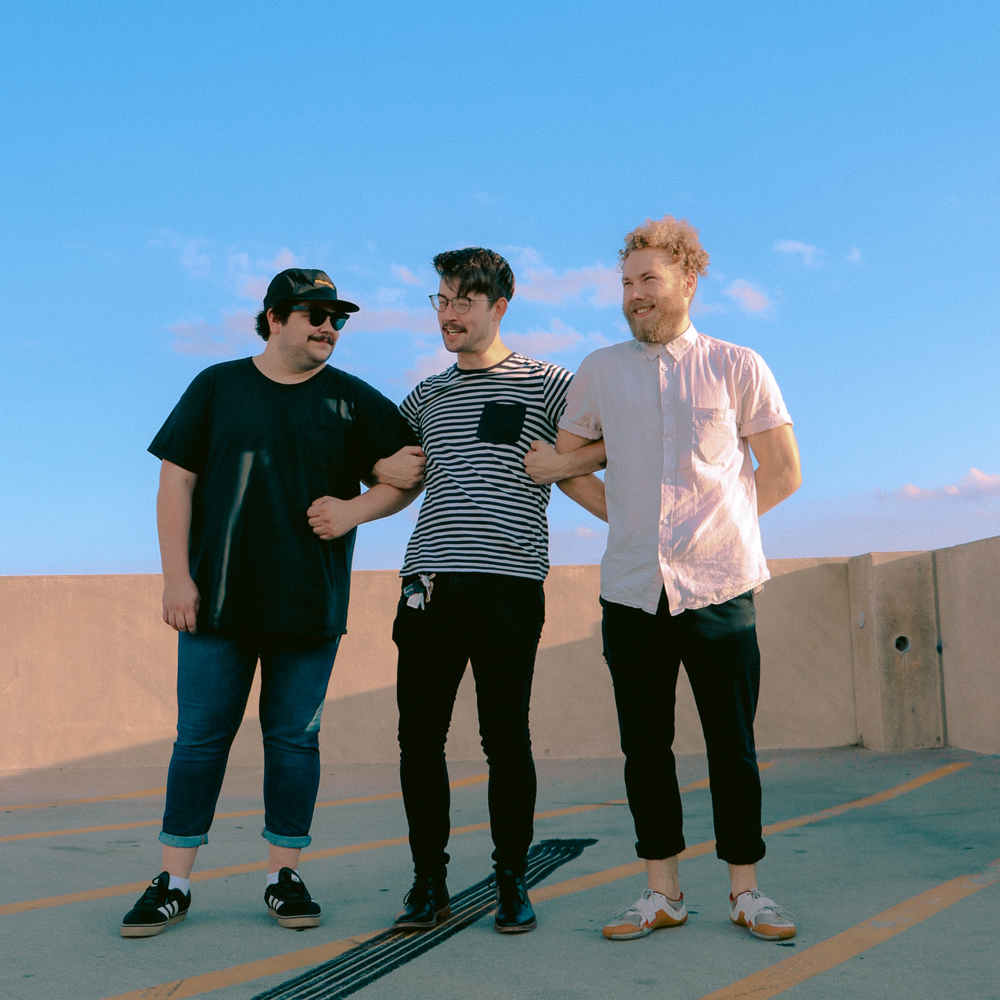 Wichita’s Old News played Kansas City regularly enough over the last couple years to count as local, rather than regional, so we here at The Pitch are likely not the only ones excited to see that the emo rockers release their debut full-length, Self-Acceptance Speech, via Austin label We’re Trying Records on Thursday, October 15. The band’s sound manages to reach back to the late ’90s, when bands like The Promise Ring, Sunny Day Real Estate, and Kansas City’s own The Get Up Kids would pack small clubs with kids in Converse just looking to let it all out in a fury of guitars and heartfelt lyrics.

We’re also super-excited to premiere Self-Acceptance Speech‘s second single, “Pulling Teeth,” a horn-tinged, heart-on-the-sleeve slab of music that kicks off the record and features the absolutely killer line, “Let’s cut our losses and cut each other out,” which is as clever a lyric as I’ve heard in ages. Check it out below, and read all about how Old News came together and made this record in my interview with frontman Beau Harris.

The Pitch: How’d you come together?

Beau Harris: Originally, Old News was supposed to be this one-off recording project outside of my jazz-fusion/funk outlets. I had written a handful of songs, recorded them as an EP titled Consolation Prize, and released it as a more-or-less “hey look I wrote some songs” sorta deal under the name Old News. Unbeknownst to me, Jedd Beaudoin from Strange Currency & Pop Matters got a hold of it and put it on his list of top regional releases for the year. As a result, I started to get some show offers for this multi-instrumental recording project I had no way to play live {laughs}, so I needed to put together a lineup pretty quick. Max, Blaine, and I met while playing music together in college–I think Blaine and I were playing in a jazz quartet together, and Max and I were performing in this avant-garde percussion group.

The other founding member, Sutton Wilson, our first trumpet player, and I already played together in a funk project. The three of them are such badass players that have such color and vibe to their playing, so I knew I wanted to tap them specifically. We all got in a room together to rehearse, realized we got along and played together really well, and decided to make it a full, collaborative project instead of a temporary thing. We started playing out more, did another EP, and started touring. These days its a trio with Max, Blaine, and myself.

What led you to work with John Naclerio?

John Naclerio was our mastering engineer for Self-Acceptance Speech. When setting out to record Self-Acceptance Speech, we had a few sonic goals in mind: we wanted the record to be lively, dynamic, and where appropriate, absolutely pummeling. In the recording world, this is a challenge very similar to that age old ‘pick 2 of 3: fast, cheap, or good’ triangle question, but you know, sonically. We didn’t want to settle on having something that was just lively and dynamic, or just pummeling, and so forth, and mastering plays a huge part in striking that balance. So we spent a lot of time deciding on where to take it. Individually we spent a lot of time digging through our personal record collections, finding stuff we liked the vibe of, and then thumbing through liner notes to see how, where, and by whom these records were recorded by.

We kept coming back to Microwave’s Much Love and Strawberry Girls’ Italian Ghosts. Both records, in their own ways, are massive sounding, densely layered but articulate, and remarkably human for being really intense rock records. When we looked at the liner notes, John had worked on both. I dug around, found his email, and reached out to see if he’d be interested in working with us, or at least giving us a suggestion on where to go with it. He responded immediately and we started a dialog, and he came on board. He’s an incredibly friendly, professional, and all around super-cool guy, and we were really honored he fit us into his schedule.

The album draws from an era of music which seems a little before your time. When did you come to this style of music?

I got turned on to ’90s emo and math rock in a really roundabout sort of way. Growing up, I lived in a really strict, fundamentalist evangelical household. Like both sets of grandparents, my uncle and his wife, and some other miscellaneous relatives were fire-and-brimstone preachers sorta strict. So 99% of music, and especially rock music, was absolutely not an option for me to listen to. But you know, kids find a way. So I would go to the public library or stay after school to listen to music on YouTube. I went through a really heavy phase, falling in love with death metal and post-hardcore and all their various genre cousins; anything with feedback and screaming I was into.

I think it was definitely a rebellion of sorts, as far away from worship music as I could get. I was deep down one of these Youtube music-benders when I came across a record that would change my life forever, Six Gallery’s Breakthroughs In Modern Art. I listened to it with my mouth completely agape. The time signatures shifted everywhere, the entire rhythm section had such interplay, and the vocalist wasn’t screaming, he was yearning. It was beautiful. I think I legitimately cried during ‘Smile Like A Switch’. I had never heard anything like it. From there, I more-or-less tossed metal aside and took a deep dive into math-rock, which led me into emo and its derivates, and that was my gateway into 90’s indie-rock and all that. It resonated with me intensely. So in a way, I came to our genre(s) in reverse, kinda like a backwards gateway drug {laughs}. Metal, into math, into emo, and back again.

Why go with We’re Trying Records to release the album?

Jordan and the entirety of We’re Trying Records have been so good to us from way before we came on board, and we were pals with/fans of a couple of bands on the roster, so it was a really natural fit. We’re Trying has this playlist series called Sad Jams, where they photoshop an DIY emo band onto a jam jar and its equal parts hilarious and phenomenally curated. We ended up on this Spotify playlist, ended up getting in touch around SXSW last year, and played this festival/showcase sorta thing last August. After meeting everyone and spending some time in Austin, where the label is based, we realized we, the roster, and Jordan, the director, all kinda looked at music in a very similar way.

We’ve always operated as a DIY enterprise, so we were hesitant to partner with a label, but we were starting to hit walls with what we could accomplish logistically and otherwise. We’re Trying partners with DIY bands in a less ‘label-y’ kind of way and, rather than swinging the pendulum too far in either direction, the label operates under a ‘Do It Together’ sort of ethos. That really resonated with us and so when it came time to find a home for Self-Acceptance Speech, we went with We’re Trying. They’ve gone to bat for us so many times and have done so much for us, all while giving us complete and utter freedom to keep doing our thing, just with another person in our corner to help out.

This single’s horn part makes it really stand out. Is its inclusion a nod to your jazz leanings, or something else?

Jazz and funk are such big parts of our history, our identity, and our personal listening time, so we try to incorporate horns and improvisation on every release. “Pulling Teeth” and the rest of Self-Acceptance Speech are no different. For most of the band’s career we’ve had horn players as members or part of a live lineup, or at least worked with them; I mean we even started off with a trumpet player as a founding member. [laughs] We love horn sections and think they’ve been sorely underutilized in rock music. Sage Judd (tenor sax) and Josue Estrada (trumpet) have performed live with us on many occasions, not to mention they’re dear friends of ours, so we tapped them to play on the record. Aside from the fact that like half our best friends are horn players, we love incorporating horns as a tool to subvert genre expectations and take stuff to that next level.

When you show up with a horn section to an emo bill, people raise an eyebrow at first, but its game over when they start playing. Its also a cheeky little nod to our history being mislabeled as a ska band. Don’t get me wrong, I love that genre, but we went through a long, long period being asked to open for ska acts simply because we had a trumpet player, so we kind of just decided on “you know what? Lets just own it”–now horns are on pretty much everything. [laughs]

All the songs on the album have a certain acerbic sense of loss. Are you writing from a real place, or inhabiting characters?

It’s coming from a very real, very personal place. Often times loss serves as a catalyst for change, but in the process, we often overlook grieving the loss of ourselves. While writing the lyrics for the album, I was dealing with a tremendous amount of grief. My first more-or-less ‘adult’ relationship had completely imploded under extremely painful circumstances and that directly contributed to the dissolution of a deeply meaningful, long-term group of friends. I had just moved across the state to a new town where I didn’t know anyone, didn’t have anything, and didn’t know who I was or where I fit. Somewhere along I had lost myself in that pain. But I recognized I wasn’t well mentally and I knew I wasn’t happy with myself. I knew it was time, pardon the cliche, but it was time to ‘find myself’ and figure out who I wanted to be and do with my life. During that process I let go of a lot; I let go of dreams I was sure I’d accomplish and people I thought I’d become someday, as well as came to grips with the trauma I had just experienced. I grieved the loss of who I used to be and the things and people I used to have, and after it was done, I felt peace for the first time in my life. Self-Acceptance Speech is an album about finding one’s self, coming to love who you are instead of who you used to want to be, and accepting that, while you may not be who you were or have who you had, life, love, and hope will always find a way.