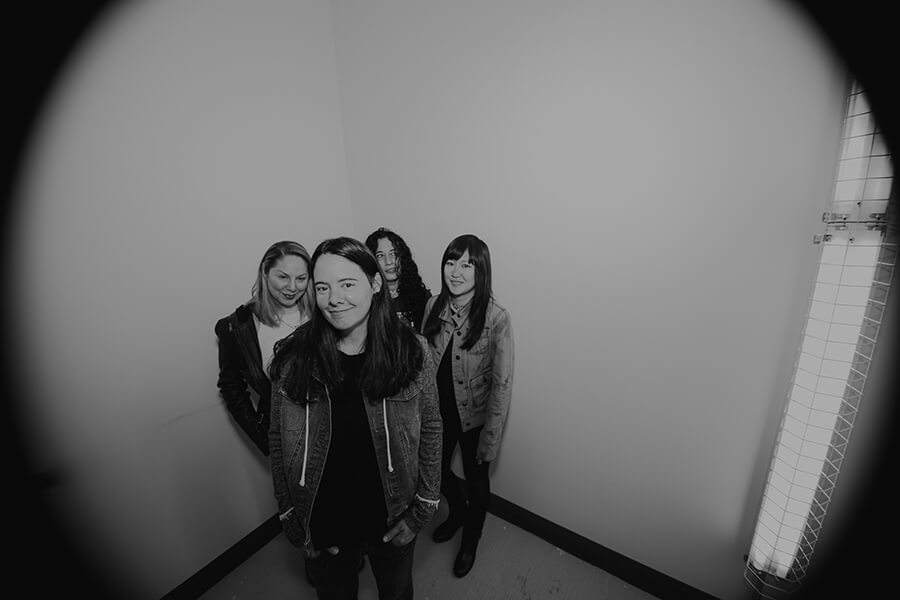 In the late ’90s, the band’s albums for Tristar Music and C2Records, Count To Ten and Safe Ride Home, were radio mainstays, and the band would pack clubs. That debut, Count To Ten, was even produced by Everclear’s Art Alexakis and spawned two enduring classics, “Be” and “Trust?”

ThimeThief is a return to what made the band so amazing in their heyday, with catchy choruses, big guitar hooks, and a pop sensibility that still manages to feel fresh. It is with great delight that we’re premiering TimeThief in full, ahead of its official release this Friday, November 19.

We spoke with the band’s lead singer and guitarist, Heidi Phillips, about the story of Frogpond’s return. Read that below while you listen to this fantastic new album.

The Pitch: When did the journey to bring back Frogpond begin?

Heidi Phillips: Over the years, we had talked about the possibility of some type of reunion but the time never seemed right. Unfortunately our drummer for the second record, Safe Ride Home, Billy Johnson, passed away in 2018. Justine [Volpe, bass] and I got together with Marty Robertson who toured with us on the second record, and our friend King Crawford (long-time friend of Billy’s, as well, and a drummer) and played some songs for his Celebration of Life at Uptown Theatre. It was just so easy playing those songs and felt so natural that I was bugging Justine about playing a whole show. Her response was. “Why just a show?” I took that as her wanting me to write some new songs (not sure that’s what she meant though lol), so I started writing and here we are.

How in the hell did you manage to keep this under wraps?

When I started writing, I kept it to myself and didn’t tell anyone what I was up to. Once the songs were demo’d I shared with Justine and recruited Kristin [Conkwright, rhythm guitar] and Michelle [Bacon, drums] and we started practicing. I’m not sure how we managed to keep it under wraps for so long. I guess we are all just good secret keepers. We kept the circle as small as we could and then would eventually tell more people as we needed more involvement and branched out from there. We finally announced our return when we were told that Count To Ten was to be released digitally because we wanted to use that as a jumping-off point.

Why come back with a full LP, rather than starting with a single here and there?

I think in order for the venture to feel complete and full filling the full album is needed, at least for me. One song I don’t think would be able to represent that Frogpond is truly back.

What led you to add Kristin and Michelle to the lineup?

I’ve known both of the girls for a long time and knowing what great musicians they both are it was an easy choice. Michelle had asked me to sing a song with The Band That Fell To Earth at the last show. I sang “The Man Who Sold The World,” and when I got up on stage there was such great energy and the stage was full of awesome female musicians. That was the point I had realized I wanted to make the band all-girl again. Michelle had followed up with me stating that if I ever needed a bass player or drummer she would be in. So I told her, in fact, I did need a drummer for a new project but did not tell her it was Frogpond. She agreed without hesitation.

I approached Kristin in the same way. I knew that she was primarily the bass player for the band Emmaline Twist, but knew she has played guitar in the past with Knife Crime, both great bands, so I asked her if she would like to play guitar in my new project. She also immediately agreed though did wonder who would be playing bass, which I think maybe clued her into what was up.

Both the title of the album, TimeThief, and the first single, “It’s Not Over,” refer to the passage of the years. Were these on your mind when the album was being written?

I guess they were. “TimeThief” was one of the first songs written for the album and “It’s Not Over” was actually the last one written on the album so maybe it’s still on my mind. I think for me the big takeaway for those titles and maybe the whole album, in fact, is that you have more ability than you know to change things or create the life that you want. I think sometimes we get caught up in what we perceive as the “right way to live” and the timeline we should follow from birth to death, but the truth of it is everyone is on a different path and really you can do things in whatever order you want and you don’t have to be done changing and growing at a certain age or time in life. Just because someone said so doesn’t make it true.

What are the challenges in bringing back a beloved band without it just being an exercise in nostalgia?

Honestly, there has been no challenge with having it be just nostalgia. In my mind, the already existing Frogpond songs and the new ones alike are current in my mind. It doesn’t feel like nostalgia to me, it feels like exactly where we are supposed to be. The new album is a continuation of the band and helps bridge the 20+ year gap.

You can pre-order TimeThief from Black Site here, although it bears mentioning that physical copies have been delayed because of [gestures vaguely at supply chain issues, etc.]. The band’s album release show, with the Creepy Jingles, is Saturday, November 27 at the Record Bar. More information on that show and tickets here.