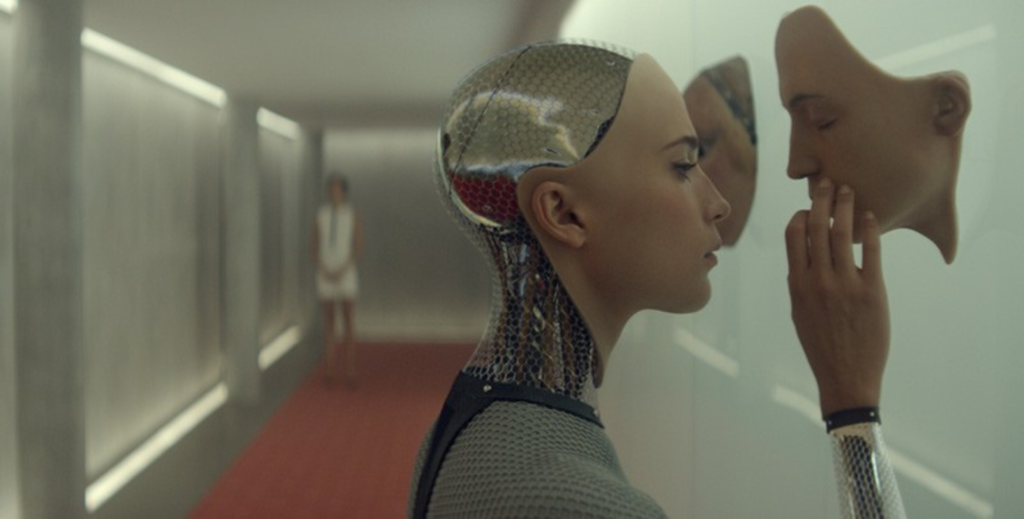 The title of Alex Garland’s new Ex Machina tells you quite a bit about the movie’s chilly perspective. If the phrase resonates for you, it’s because you learned a bit about classical Greek theater at some point, in particular its deus ex machina, or “god from the machine.” In a play, it’s really little more than a way for an instant resolution, a sort of “get out of dramatic conflict free” card. The gods come down and fix everything. But Garland’s point is clear enough: God has gone missing, or was never there to begin with.

This is the latest parable about the consequences of artificial intelligence, but where films like Blade Runner and A.I. have used the promise of this new technological frontier to interrogate fundamental questions about humanity, Ex Machina does something that is simultaneously bolder and more frustrating. Novelist-screenwriter Garland, in his directing debut (he wrote the scripts for several key Danny Boyle films), orchestrates the great A.I. debate within a universe so completely conquered by neoliberal capitalism and its lone-wolf Jobs-Gates-style entrepreneurs that ethical or ontological concerns are dead in the water. Someone, somewhere will build the first self-aware RealDoll; it’s only a matter of time.

That someone, in this case, is Nathan (Oscar Isaac of Inside Llewyn Davis), the smug “just a bro” billionaire chairman of Bluebook, a multiplatform search-engine company. Under the pretext of an employee lottery, one of the programmers at Bluebook, Caleb (Domhnall Gleeson, About Time), is chosen to spend one week with the Big Boss at his massive, insanely isolated, CIA-secure compound in the wilds of Finland. Nathan’s breathtaking modernist home, with glass and steel encasing rock formations and hot springs, provides shrewd visual shorthand for the man’s basic agenda: He plans to subdue nature — to add onto it until it’s his.

Once Caleb is there, Nathan explains that he has been summoned to test the newest version of his A.I. being, called Ava (Alicia Vikander). A fetching cyborg with girlish features and semiexposed circuitry, Ava seems to take a shine to Caleb. According to Nathan, the idea is for Caleb to see whether Ava passes the Turing test — is she indistinguishable from a human being? But soon, with Ava’s help, Caleb discovers that it’s Nathan himself who might fail that exam, despite being flesh and blood.

Although Garland seems genuinely interested in the consequences of building artificial, sentient beings, Ex Machina is primarily a three-hander, a small-scale contest of wills that would be well-suited to the stage were it not so dependent on the massive, imposing architecture for its primary effects. In this regard, there is a schematic quality to Ex Machina: Science and uncertainty are interrogated with slow tracking shots through antiseptic spaces; the divide between beings is reflected and refracted through multiple panes of glass, etc.

Nonetheless, the icy visual abstraction (courtesy of cinematographer Rob Hardy) is impressive. That, along with a soundtrack by Portishead’s Geoff Barrow, serves to make Ex Machina a worthwhile curiosity, even if it ultimately has less in its mental banks than it thinks it does.