Evie Englezos and her Sweet Destructor ceramics listen to the animals 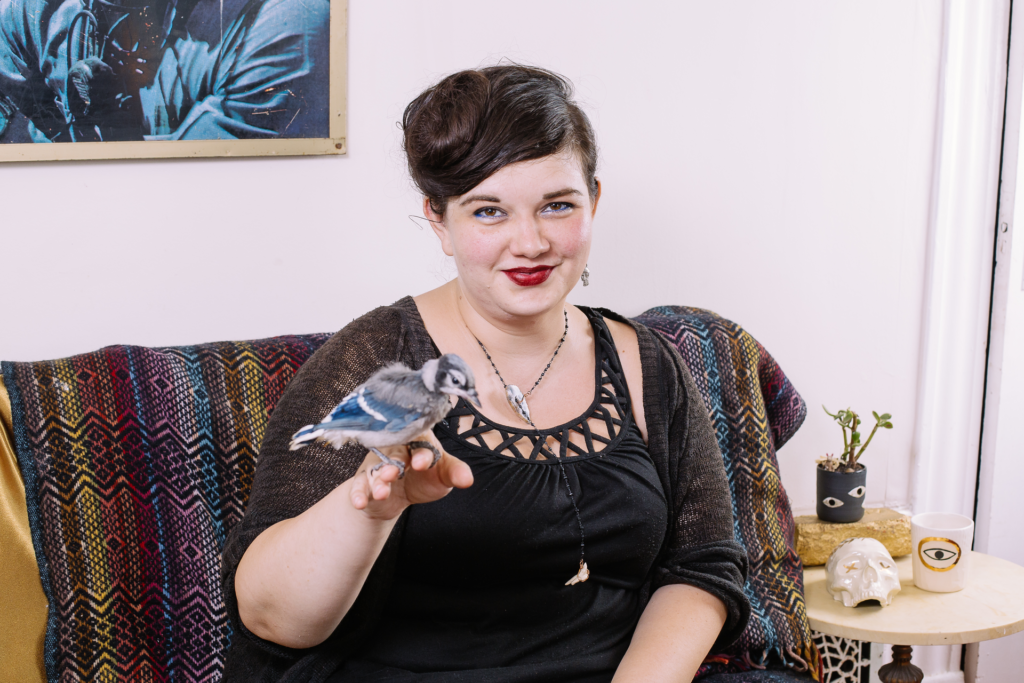 One July day, I returned to my apartment to find a large black bird crouched on my second-story porch. I carefully stepped around and went into the house to send a message to the only person I knew who could help me solve this situation: Evie Englezos.

“So, uh,” I texted. “There’s a raven on my porch and it’s not flying away. Doesn’t seem to have a broken wing but idk. What should I do?”

Her response was immediate: “I would probably grab him in a shirt, put him in a paper grocery bag and take him to Lakeside.”

She would know. Earlier that week, Englezos and I had spent an afternoon in her studio, in the upstairs room of a Northeast house close to the Jazz District. The space doubles as an aviary, and she was then in the process of rehabilitating 14 birds of three species (and one turtle). Certified through Lakeside Nature Center as a wildlife rehabilitator, Englezos cares for animals in the natural light of her ceramics studio, where she builds and creates for her brand, Sweet Destructor. The combination of studio equipment, makeshift cages and a garden enclosure for the soon-to-be-released birds makes her space arguably the city’s most unorthodox maker HQ.

“I began rehabbing because of my first starling, Flugleman,” Englezos said when I visited her there. “Nine years ago, I found a featherless nestling in a parking garage, about to get pancaked by an SUV. I couldn’t figure out where the nest was, so I took it to Lakeside Nature Center, where I found out it was a starling. I knew nothing about birds, and they don’t take non-natives like starlings for rehab, so my partner and I raised him to birdhood.” 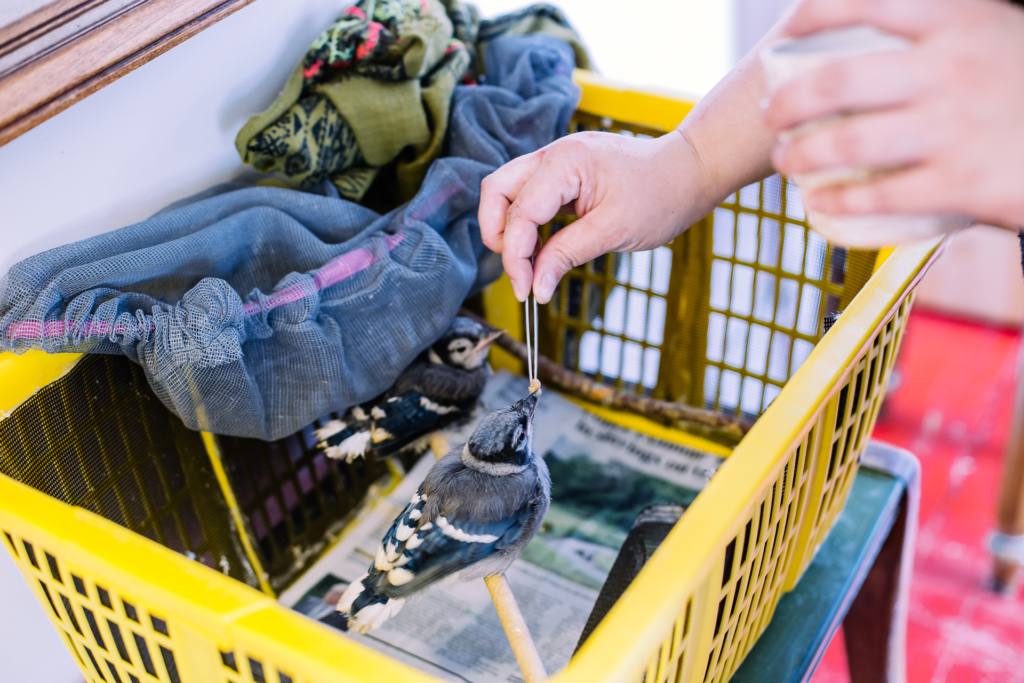 Flugleman died not long ago, and his cremated remains live in a flat urn, which Englezos made; she etched his image on its lid. (She tried to talk me out of viewing this homage, perhaps figuring I’d find it creepy. In fact, it’s very beautiful.) Five starlings now carry on Flugleman’s legacy in the backyard aviary and will be released into the wild soon, but there’s also another pet starling, called Chicken. Most Missouri residents consider starlings a pest — they swarm in Hitchcockian numbers, their song is mostly noise, and they speckle everything beneath them. Yet Chicken, an iridescent specimen with an inquisitive and insistent personality, makes an apologetic case for its fellow muscicapidae. “He likes to stand on my hands or near the wheel when I throw pots, and he sometimes pecks and dents them,” Englezos said.

These dents and pecks become part of the ceramic action, as much an element of the Sweet Destructor process as the ongoing interspecies banter between artist and animal. Beside Chicken’s open cage is a stout mesh contraption containing seven fledgling robins perched on sticks, looking around in the bewildered way unique to baby birds.

“Hey, guys,” Englezos said to the other birds — two baby blue jays near the door. They scream over our conversation until Evie squirts a syringe of mushed animal food into their open mouths. The rehabilitation process is not for the fickle or the irresponsible. “Each day I prepare baby-bird formula, plus fruit, worms, whatever makes up the primary diet of the species I’m raising. Depending on age, I feed them every 20 minutes to two hours until they’re eventually weaned. Some birds have special needs, so I’ll give medications or perform physical therapy. When they’re ready, I release them into the wild.”

Englezos attended the Kansas City Art Institute’s printmaking program, but her artistic practice is as much a byproduct of civic duty. “I went to vote four years ago and found out my polling place [Westport Roanoke Community Center] had a ceramics studio,” she said. “So I’ve learned from Michael Oliver [who teaches at the center].” She also credits Rebecca Koop, of Back Door Pottery, as a mentor.

Englezos handles her ceramic pottery like so many baby starlings, she said: “with care and allowing for the natural character of the material to shine.” Her studio consists of a pottery wheel, a desk for building ceramic slabs, and shelves of completed and in-progress work. Her art’s most immediately recognizable characteristic is its repetitive use of a kind of evil eye — a lidless almond shape with a dotted iris in the center. It populates petite minimalist cups, rough-edged spoons and decorative dishes good for storing loose rings or coins. The icon is a universal symbol for sight and wisdom rather than a harbinger of more dire fates. In the absence of a storefront, Englezos sells her Sweet Destructor wares at places such as Hammerpress, Opal & Gold, Oracle, Skin KC and We Are Sincerely Yours. (On the Kansas side, she’s at Hand & Land, in Leawood, and Wonder Fair, in Lawrence.) She’ll be at We Are Sincerely Yours on Thursday, August 24, for a 6-9 p.m event called “Plant Tiny Cacti with Sweet Destructor,” which combines horticulture and shopping. That weekend (August 25-27), she and her goods head to Roost Market at Union Station. 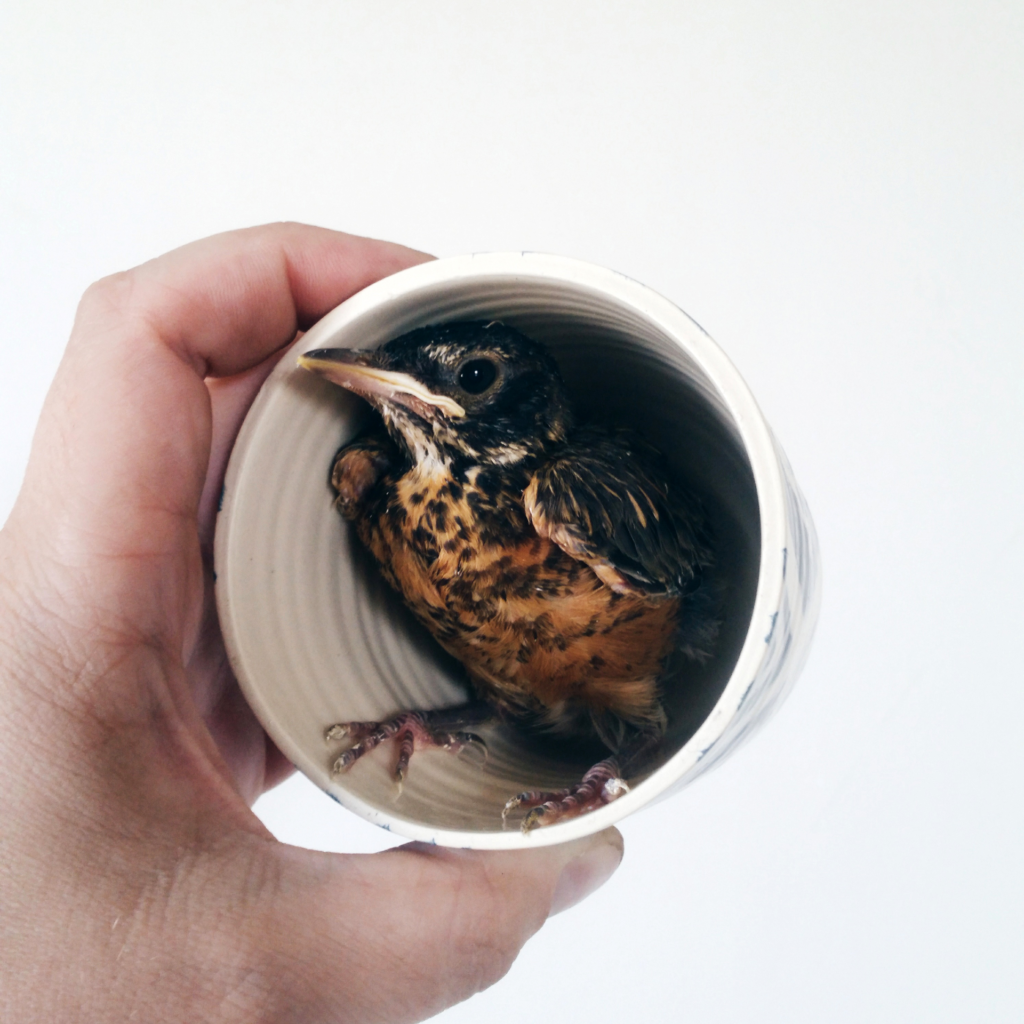 Before I left her studio, I met its wingless animal: Chaz, an ornate box turtle that was hit by a car and lost part of its shell. The shell is growing back just fine, at the usual turtle pace, and Chaz seemed content, in the usual turtle way, to share space with the other species in the room. Any printmaker would be attracted to the colorful striations of Chaz’s shell and the golden scallops on its legs. The turtle was moving toward the wall of finished Sweet Destructor ceramics, as though choosing a gift from the small cups and the salt pigs, with their markings made to resemble the animals under Englezos’ roof. I was reminded again how much everything here — art, environment, wildlife, commerce —  is braided together in her practice.

My conversation with her was still on my mind even as I walked up my stairs to find that injured crow. I remembered her saying, “It’s funny how we base all animal intelligence on our own intelligence — like our intelligence is the only way to be. In a lot of ways, a bird is way smarter than any 3-year-old.” (Crows, you know, are among the smartest creatures in the air, practically diabolical.) Using a broken branch, I coaxed the bird onto a perch and into an open box, where it remained until I rang the buzzer at Lakeside Nature Center.

“I’m glad Evie texted me. I was just about to leave,” said Jesse, one of the rehabilitators, as she transferred the bird to a safe enclosure inside a room I could not see. “We’ll take good care of him.” I believed her. The next wild, energetic crow I see in my backyard might well be giving me a message from Evie.