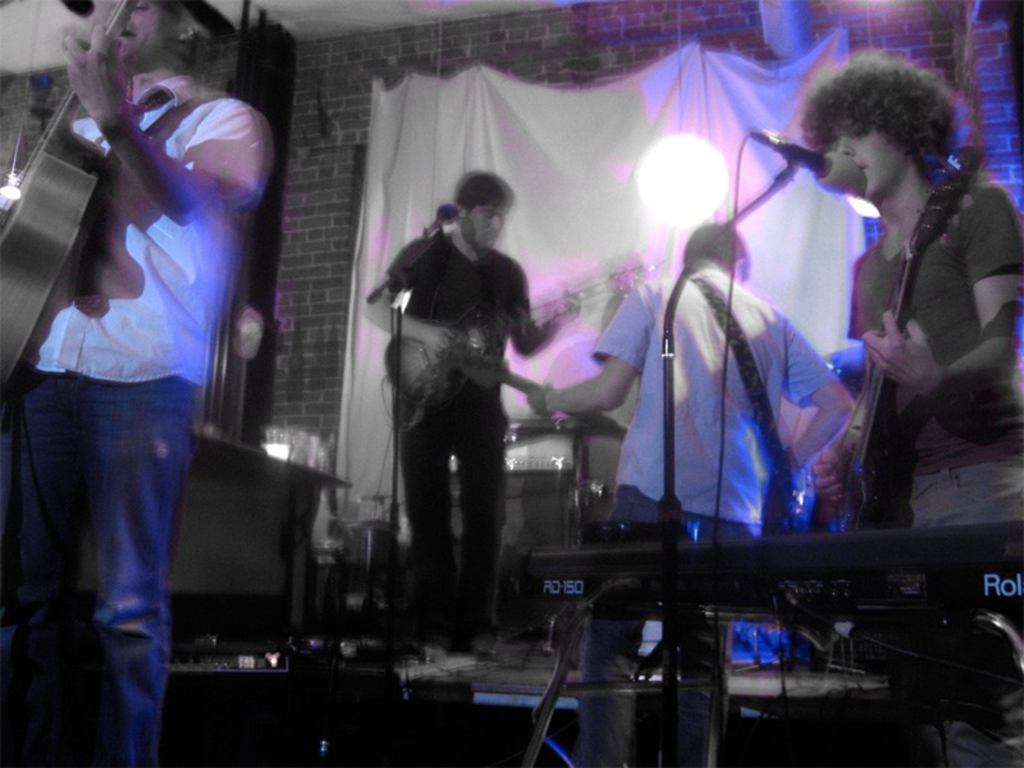 The boys of Everyday/Everynight are cool with the fact that you haven’t heard of them yet. But watch out — pretty soon, you will be held accountable.

Comprising five ragtag kids with tousled hair, plaid shirts and tattoos, Everyday/Everynight initially appears to be your token group of indie-band boys as they chill on their couch in Brookside, their homemade album art hanging on the wall. Sweet, friendly and eager to please, the guys give off a fresh-faced naïveté. But after a few minutes of talking shop, you realize that this isn’t their first time dealing with the Kansas City music scene.

After self-releasing their debut record, Moon Phases, in early September and booking a cluster of shows across the Midwest, these young alt-rockers are making a name for themselves with the lush orchestration, pounding piano lines and rich sonic textures of their band’s music.

With glimmers of influences such as Cursive, Explosions in the Sky and Brand New, Everyday/Everynight hovers between genres, fusing shimmering electro fuzz and rougher punk undertones with the angst-ridden vocals and soft, acoustic conscience of kids raised on a hearty diet of Saddle Creek.

Whether they’re serenading with an ethereal acoustic lullaby or turning on a dime to explode into a torrent of alt-rock fury, one thing’s for sure: These five guys under the age of 23 know how to strike a mature chord.

Everyday/Everynight began with two childhood friends in Omaha: Holdaway and Tomasino. The two moved to Kansas City after Holdaway enrolled at William Jewell and Tomasino was admitted to the UMKC Conservatory of Music and Dance, where he met Shoare and Ashby in the conservatory choir. Tomasino later invited Brown to join the band after meeting him at an audio-engineering program at BRC Audio Productions in Kansas City. The members began to mesh styles, sounds and harmonies, and ended up taking their band name from the lyrics of one of the first songs they wrote together.

Soon, they ventured out onto the scene.

“I was completely inspired going around to local venues and checking out local bands,” Ashby says. “I don’t know that people see Kansas City as a music town, but I think that there’s so much opportunity here.”

Citing influences such as In the Pines, the Republic Tigers and even local dance DJ Max Justus, Everyday/Everynight is particularly inspired by acts that are doing more experimental things.

“[It’s] that tangible experience of, ‘Oh my god, they wrote that? It’s amazing. I love it. Maybe I could do that,'” Tomasino says. “That’s why I love the idea of music as a conversation. We take it in, we hear it, and we say something back — it’s very organic.”

But this community of musical exchange has its ups and downs in a town like KC, especially as the guys of Everyday/Everynight establish themselves among other young bands.

“It’s like shark-infested waters,” Tomasino says. “There are a lot of really cool-looking sharks and really dangerous sharks.”

A bit of rivalry never hurts, but when it comes to such things as booking shows, many small local bands are in competition within the same genres and for the same fans. And some are not afraid to get a little lethal.

“The Kansas City scene fosters really great business skills and assertiveness,” Tomasino says. “It’s definitely more economical to look out for yourself, so to speak.”

However, the guys of Everyday/Everynight view competition as healthy.

“Being in Kansas City is like, you’ve got good songs — now what? You have to go after it,” Tomasino says. “It’s not a bad thing, but I can see how the weight of that could crush some young bands that want to develop their creativity.”

“If you want to be in the scene and play around, you have to step up your game,” Brown adds. “And if Kansas City is ever going to be seen as a music town, there needs to be some of that.”

A month after debuting Moon Phases and seeing success in terms of record sales, online merch sales and booked shows, the guys of Everyday/Everynight are feel­ing optimistic — for themselves and their city.

“From a band’s perspective right now, you want to be in Kansas City because it’s obviously growing,” Shoare says.

“You learn a lot, being a young band in Kansas City,” Tomasino reflects. “It’s like growing up on the streets; you get a little tough, but hopefully you’re able to take those skills and use them in a positive way. We’ve seen a lot come back. I know that’s not from just sitting and waiting.”

Enduring the struggles and victories of starting a new band is an exercise in devotion. And for the guys of Everyday/Everynight, their band’s name isn’t just a title — it’s a formula for success.