Erin Zona’s She Was Right is totally correct 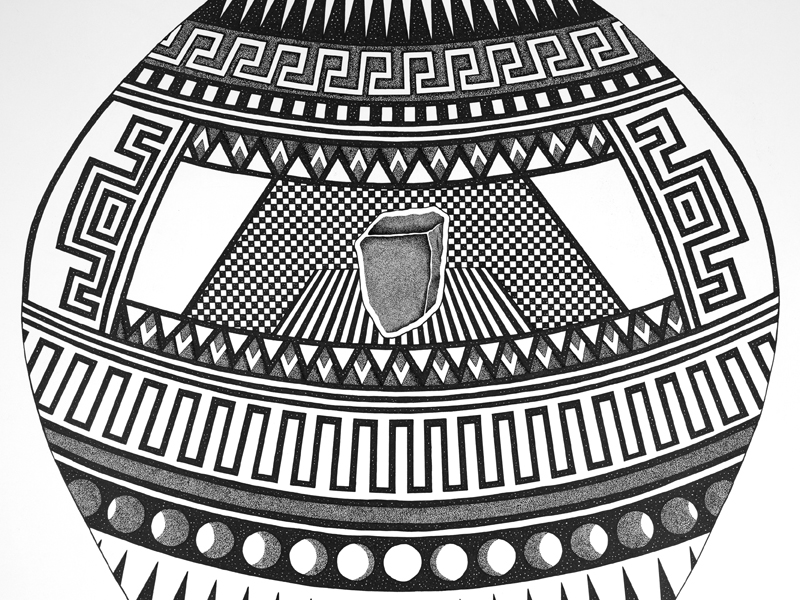 It all started around a fire.

Wait, wait — it started when we looked into space, at the dawn of time.

Hold on, I’ve got it: It all began with a woman and a single stone….

This is how I hear Erin Zona’s conversation with herself, how I picture the private studio moment when the artist conceived She Was Right, a show of black-ink drawings centered on a creation myth involving a palm-sized rock. The show’s name comes from moments in history when a person suddenly realized some great truth — a feminist eureka! And its art, ingeniously, comes from an alternative history that Zona has devised, one that lets her pay tribute to the anonymous women in art who contributed to the Zeitgeist while remaining lost to history.

Zona’s imagined rock emerges in a plurality of cultures. It’s represented in the bulge of a vase and in the ancient geometry of Peruvian and Grecian vessels. It dangles from a chest piece that reminds us of Native American textiles. It once belonged to a French queen. It is both the spring and the payload of Zona’s anthropological catapult. But it’s the viewer who is launched into the world she has invented, in which the rock disappears from one country that has succumbed to war and pillaging, only to pop up a century later in a lavish setting. 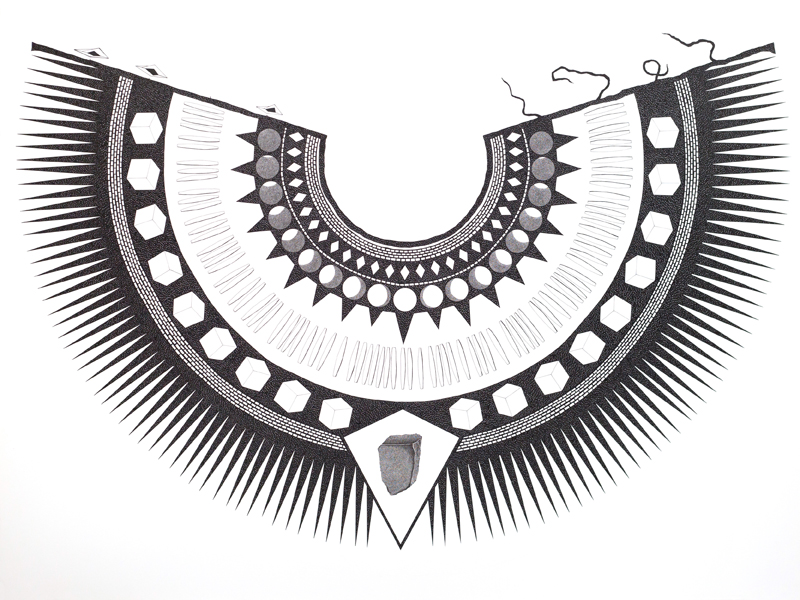 She Was Right’s epic chronicle starts with a triptych, part zoetrope and part early Keith Haring. Zona refers to this as “The Garden,” and she shows us a sky splitting open over the world at its very beginning — perhaps to admit a meteorite, one possible origin of this geological fable. Eventually there is the main attraction: the stone, on the dangerous end of a 45-degree angle, encased in Plexiglas on a pedestal that’s shaped like a lightning bolt aimed at the tender center of your forehead.

“It’s a piece of gravel I painted black,” Zona told me recently, not in my mind but at Front/Space. Real talk: “Of about the 30 pieces I picked up, this was my favorite.”

And so the spell is broken. But the effects Zona achieves here remain. She Was Right prompts us to ask ourselves how we fit into the world and its stories.

And Zona’s own story these days is one in which she must find time to make art. She runs the Zz School of Print Media and works in the Kansas City Art Institute’s printmaking department as a lecturer — keeping a schedule that makes the details in her deeply patient ink drawings seem all the less probable. Her art requires a steady, consistent hand. An unrushed hand. “It affects my personal life,” she told me when I asked her about balancing the demands of her work against her own practice. “Everything is evenly not where it should be.”

Except in She Was Right.