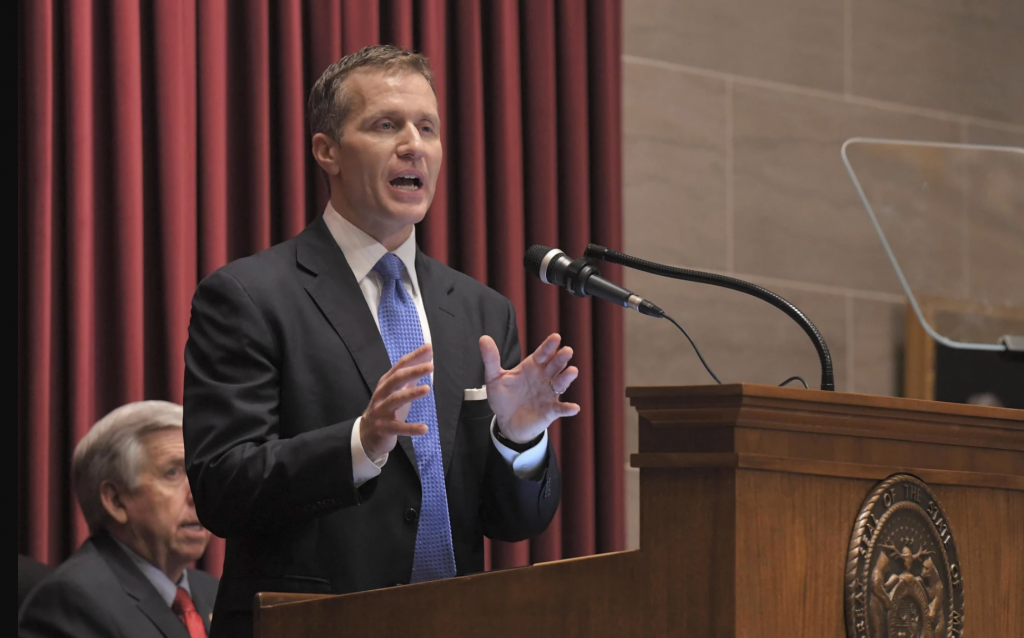 Former Gov. Eric Greitens delivers the annual State of the State address to the Missouri House in 2018. // Photo by Tim Bommel/Missouri House Communications

While former New York Governor Andrew Cuomo has recently resigned after allegations of sexual harassment, Greitens has mounted a political comeback since his 2018 resignation following a Republican-led investigation that detailed graphic sexual allegations.

Since that time, Greitens has insisted that he’s “been completely exonerated,” though even the GOP isn’t so sure.

Nonetheless, by tapping into patriotic sentiment, Greitens has been able to convince a large swath of voters that he’s the candidate best equipped to “help revive our Republic.”  At events, he claims that he is “the true conservative and patriot in this race.”

However, rather than condemning the events of January 6 without reservation, Greitens has sought to highlight “unanswered questions about statistically impossible election results,” even though former Attorney General William Barr – a Donald Trump appointee and former loyalist – declared that there was no evidence of widespread voter fraud.

Shortly after January 6, Greitens helped to promote the baseless claim that Antifa was behind the Capital breach, and he still regularly refers to Trump as “the President,” sowing doubt in the legitimacy of Joe Biden’s electoral victory.

More recently, Greitens has travelled to Arizona to tour its audit of the 2020 election. Notably this ‘audit’ has been overseen by a Florida firm called the Cyber Ninjas. Their CEO has previously promoted the conspiracy that last year’s election was stolen, and his company has zero experience conducting an election audit.

Despite such red flags, Greitens claims that the audit has been conducted with “the same level of integrity, quality, operational excellence, that you’d find in the Navy when they’re doing maintenance on a nuclear reactor.” Given that the military tends to avoid partisan squabbles, it’s probably safe to say that the Navy would rather not be roped into such a comparison, especially one so ridiculously hyperbolic.

Greitens, though, has a track record of trying to hijack the public’s respect for the military, much to the chagrin of some his brothers in arms.

Part of the SEAL ethos reads: “I do not advertise the nature of my work, nor seek recognition for my actions.” Yet, Greitens has repeatedly sought to capitalize on his service through macho campaign ads or by preforming stunts, such as rappelling from the rafters into an arena next to a huge American flag while being introduced as “a former Navy SEAL” and “military hero.”

During an interview with Stephen Colbert, Greitens coyly refused to say whether or not he was part of the team that killed Osama bin Laden, despite the fact that he never actually served with SEALs in combat. Political strategist Karl Rove, who is often credited with George W. Bush’s 2000 and 2004 presidential campaigns, notes that while Greitens “served honorably,” the fact that “he can’t just admit the nature of his service is…indicative…that [the] man is a deeply-flawed individual.”

Trump avoided military service as a result of bogus “bone spurs.” He argued that the late Republican John McCain wasn’t a war hero because he was captured. He called Americans who died in war “losers” and “suckers.”  He referred to the crowd that gathered before storming the Capital as “loving.”

Greitens has calculated that remaining in lockstep with Trump is his best chance for success, and as such, he has aligned himself with perhaps one of America’s least patriotic presidents. Yet his campaign also rests upon leveraging his SEAL-ness so as to be seen as  the most “patriotic” candidate in a crowded Senate race. In order to resolve this inherent contradiction, Greitens has essentially redefined patriotism from “devotion to one’s country” to the blind worship of one man.

When Greitens joined the Navy he took an oath to “support and defend the Constitution of the United States against all enemies, foreign and domestic.” In prostrating himself before an individual who has repeatedly sought to subvert the constitutional order, Greitens has found himself in violation of his military oath, no matter how star-spangled awesome he may once have seemed.