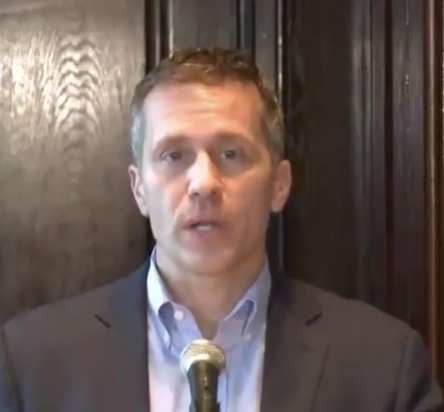 By now, you’ve likely read the report or skimmed its details on Twitter. In it, the Missouri governor’s ex-lover — a woman deemed by the committee to be a credible witness — details a harrowing 2015 encounter in which Greitens blindfolded her, taped her hands to exercise rings, ripped open her clothing, photographed her, called her “a little whore,” and coerced her into performing oral sex. (Worth noting: the committee is comprised of five Republicans and two Democrats.)

Greitens says he ain’t leaving. In delivering a statement to reporters shortly before the House committee made its report public, Greitens saw enemies everywhere.

He is the subject of a political witch hunt, he said. People have been out to get him since the day he took office. The report — though he hadn’t yet seen it — was “tabloid trash,” replete with lies and falsehoods conjured. The “irresponsible media” was piling on. The House committee report was one-sided; he didn’t mention that he’d refused to give his side. The same murky cabal that is after President Trump is out to get him, too.

Greitens’ paranoid statements, coupled with the dangerous behavior described by his ex-lover, have to make Missourians wonder if the man in their governor’s office is even sane. For all of his protestations about a witch hunt, he is fortunate that prosecutors in St. Louis have charged him only with felony invasion of privacy. Based on the woman’s account, sexual assault charges seem appropriate.

Greitens’ reprehensible defense is to make the woman at the center of the scandal seem unhinged. In his statement, he suggested that her account of being photographed in a mortifying, partly unclothed position “may have come from a dream.”

This ridiculous contention stems from a few sentences that Greitens’ lawyers strung together from the woman’s eight-hour deposition last week. But according to her lawyer and information contained in the House report, she is clear about what happened, and Greitens admitted taking the photo in several conversations with her.

The woman, who is being identified in court documents only as K.S., is the only person in this seamy drama worthy of sympathy. At a time when she was going through a rough patch in her marriage, she had the bad luck to get involved with a man so full of hubris he thought he could run for governor while cheating on his wife. And he may have gotten away with it if his erstwhile mistress hadn’t been married at the time to a manipulative guy who nursed a grudge for months before giving the story to a St. Louis TV station.

Greitens’ dark-money nonprofit — which ought to be running out of donations by now — has done its best to slime everyone involved in the case, including the victim, the St. Louis prosecutor, and her investigators. The invasion of privacy case is scheduled to go to trial May 14.

While awaiting that spectacle, the House investigative committee and state Attorney General Josh Hawley both are investigating how Greitens’ campaign got ahold of the donor list for a veterans charity and used it for campaign fundraising. It took Hawley — a Republican gunning for the U.S. Senate this fall — about three hours to do the political calculus on today’s Greitens bombshell.

“The House Investigative Committee’s Report contains shocking, substantial, and corroborated evidence of wrongdoing by Governor Greitens,” Hawley said in a just-released statement. “The conduct the Report details is certainly impeachable, in my judgment, and the House is well within its rights to proceed on that front. But the people of Missouri should not be put through that ordeal. Governor Greitens should resign immediately.”

That’s a lot of heat in a short amount of time. But Greitens appears determined to forge ahead. No matter the hell he is creating for his own family. Never mind that overlapping scandals have left him isolated and unable to govern. He is staying, because the world is full of bad people and only Eric Greitens — still awesome, in his own mind — is capable of slaying the dragons.

But surely Missourians have seen enough. Legislative leaders must get rolling on impeachment proceedings. Right away. Missouri doesn’t need this egotistical, delusional creep anywhere near its governor’s office.