Attorney for Sheena Greitens has requested emails and texts regarding former governor’s access to guns or "indicative of instability of mind or emotions." 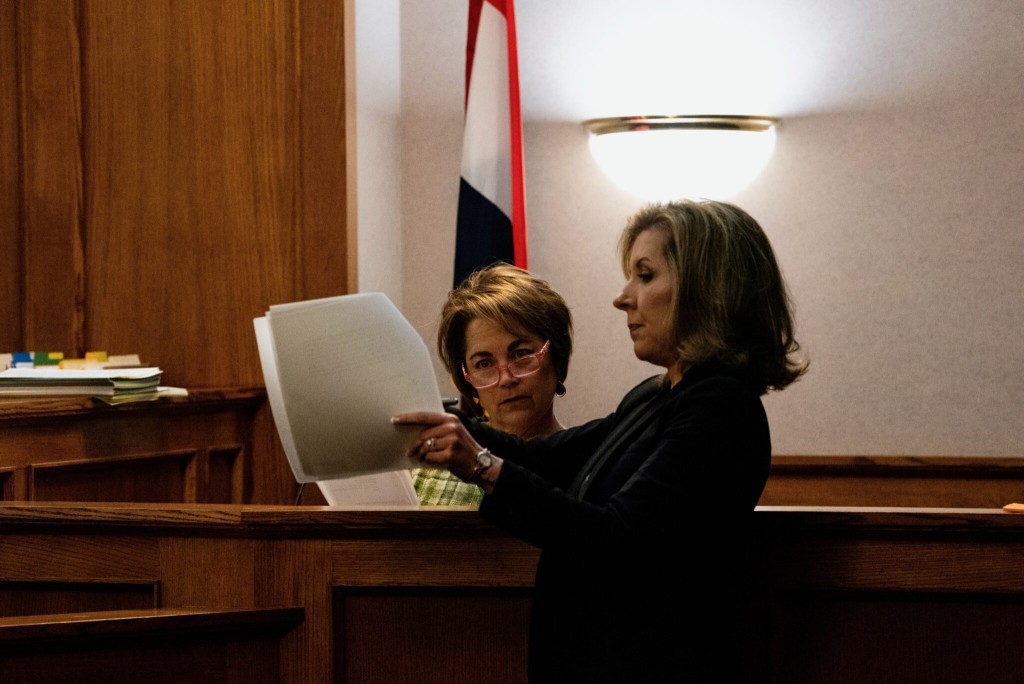 Helen Wade, the legal representative for Sheena Greitens, points to dates on the presented evidence on Tuesday, April 26, 2022 in the 13th Judicial Circuit at the Boone County Court House in Columbia, Mo. // Photo by Elizabeth Underwood/Missouri Independent

Sheena Greitens’ attorney thinks the governor’s office may have proof to bolster claims that her client’s ex-husband, Eric Greitens, was prone to violence.

As part of the couple’s child custody battle in Boone County court, attorney Helen Wade filed a records request with the governor’s office asking for documents regarding Eric Greitens losing access to firearms, or any that describe behavior by the former governor characterized as criminal, abusive or threatening.

According to the response she received from the governor’s office, her request generated nearly 13,000 records, which she is scheduled to receive Aug. 3 — the day after voters decide whether Eric Greitens should be the GOP nominee for U.S. Senate.

Many, if not most, of those records could be unrelated to Eric Greitens’ behavior during his short tenure as governor before resigning from office in June 2018 to settle a felony charge and avoid impeachment.

But Wade believes it is likely there are records detailing the reactions of staff and other observers to events described by Sheena Greitens in an affidavit – violence and intimidation against her and troubling actions in other circumstances.

“What I am looking for is evidence that would be admissible in a courtroom that would support Sheena’s position,” Wade said. “These are the behaviors that are in dispute. It appears that there are a number of records that fit that description.”

The Independent obtained Wade’s request and the response through a Sunshine Law request to Gov. Mike Parson’s office. Wade said she has paid the $1,304 estimated cost for the records search.

Parson’s office did not respond to a request to clarify how it determined when the records would be available.

“The fact that they are not available until the 3rd of August is problematic because I had hoped to have the case finished by then,” Wade said Tuesday in an interview with The Independent. “Obviously it is the day after the primary and many conclusions could be drawn from that. I am hoping it is not relevant and it is just a coincidence.”

In her request, Wade asked for:

“We have found 12,954 records that may be responsive to your request,” Dakota Julian, Parson’s custodian of records, wrote in the response. “Some may be closed or confidential.”

Eric Greitens’ campaign did not respond to requests for comment on the records being sought, the volume found so far or the date of the estimated delivery of the records. Attorney Gary Stamper, who represents Eric Greitens, declined to comment.

Greitens sees the primary as his chance at political redemption after being forced out of the governor’s office. He resisted calls to quit the campaign after Sheena Greitens’ affidavit reignited fears Republicans will lose the seat if he is nominated.

The winner will face the candidate nominated from the 11-person field of Democrats.

The Greitens divorced in 2020. Litigation resumed in 2021 when Sheena Greitens filed to move oversight of the child custody agreement from Boone County to Texas, where she lived after taking a post on the faculty of the University of Texas.

The renewed litigation did not generate much public attention until March, when Sheena Greitens filed an affidavit accusing her ex-husband of spousal and child abuse in 2018 and 2019.

The charges in Sheena Greitens’ affidavit were set to be aired in a hearing May 27, but it was canceled after the couple entered mediation. If they cannot resolve their differences, Associate Circuit Judge Leslie Schneider set a trial for July 15.

During the period covered by Wade’s Sunshine request, Sheena Greitens alleged Eric Greitens knocked her down and confiscated her cell phone, wallet and keys during an argument so she would be “unable to call for help or extricate myself and our children from our home.”

And in the spring and early summer of 2018, Sheena Greitens said, her ex-husband repeatedly threatened to commit suicide unless she showed “specific public political support” for him. As a result, she and others were so concerned they limited his access to firearms on at least three occasions that year.

In responses to the court, Eric Greitens’ attorney Gary Stamper has denied the abuse occurred and sought phone records in an effort to show she worked with his political enemies to damage his campaign. Grietens, in press statements and on social media, has blamed Senate Majority Leader Mitch McConnell and former presidential adviser Karl Rove of conspiring against him.

Along with the nearly 13,000 potentially responsive records, the process of the governor’s office could turn up many more. The standard language in each response states that additional records may turn up after staff is asked to check if they are in possession of responsive physical documents or text messages and requests are forwarded to other state departments.

One such document has already been filed as an exhibit in the court case to back up the statements Sheena Greitens made in her affidavit. Then-state Sen. Jamilah Nasheed asked for additional security in the Capitol Building in a letter sent April 18, 2018, to Drew Juden, then director of the Department of Public Safety, and copied to the Capitol Police Department.

Nasheed reported “unconfirmed rumors circulating the Capitol involving an incident at the Greitens’ Innsbrook home involving troubling behavior, the presence of firearms and a member of the Governor’s cabinet.”

In response, Juden wrote that he had asked the Warren County Sheriff’s Department, where the home is located, and the Missouri State Highway Patrol, which provides protection for governors, about the alleged incidents. They reported they had no information “similar to that which you provided,” Juden wrote.

Sunshine Law experts told The Independent that while the number is large, the search terms are broad enough to include comments received by the governor’s office about Greitens’ public behavior.

He offended many by using high-caliber and automatic firearms in his campaign commercials, noted David Roland, director of litigation for the libertarian Freedom Center of Missouri.

“It is possible that citizens were sending in emails criticizing that or making fun of him for that,” he said.

When he took office, the former governor angered Second Amendment advocates by barring people from carrying concealed weapons into the Capitol Building. The policy was reversed a month later. And he enraged several lawmakers around the same time in 2017 with behavior described as intimidating and insulting.

The potentially responsive records are also large just because of the number of search terms and the broad scope of the request, said Jean Maneke, who advises the Missouri Press Association on Sunshine law.