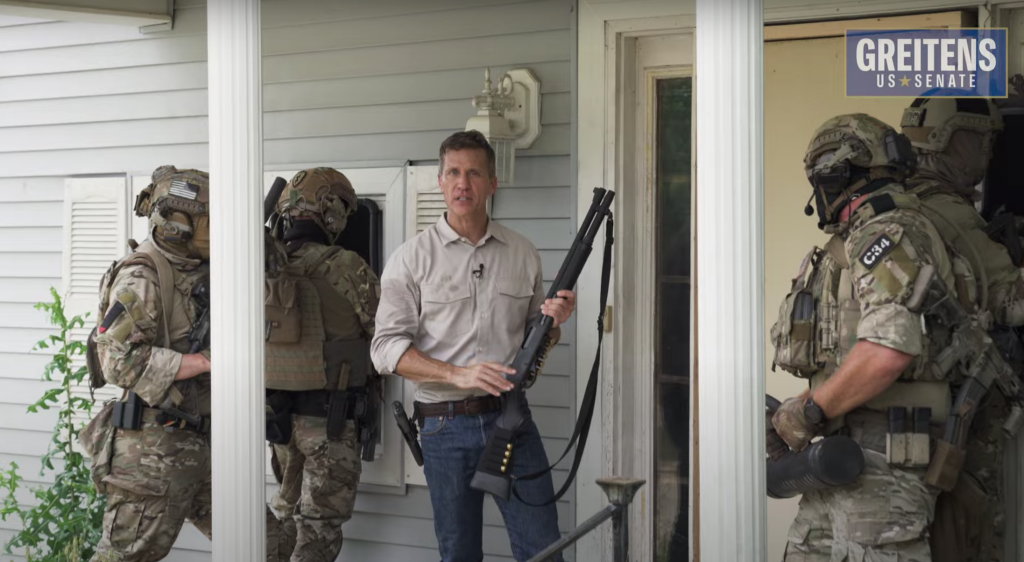 RINO stands for “Republican in Name Only.”

The video drew over 1 million views on Twitter within the first two hours after it was posted, the Greitens campaign said in a fundraising email sent about 11 a.m. Monday.

“The RINO feeds on corruption and is marked by the stripes of cowardice,” Greitens says in the video, which had also been retweeted almost 600 times and drew mainly negative comments from almost 5,000 more Twitter users.

The item being offered appears to be a reworked version of the “ISIS Hunting Permit” Greitens distributed during his 2016 campaign for governor.

Within a few hours of posting, the video was hidden behind a warning message but remained visible to those who wish to see it.

Two of Greitens leading rivals in the 21-candidate GOP Senate primary denounced the video in statements to The Independent.

The video is “very distasteful,” said U.S. Rep. Billy Long of Springfield, adding that the only way to beat RINOs “is at the ballot box.”

U.S. Rep. Vicky Hartzler, in her response, alluded to allegations first aired in 2018 that Greitens forced a woman to have sexual relations in his home and then threatened to release nude photos if she talked about it as well as more recent accusations from his ex-wife detailing instances of violent child and spousal abuse.

She also threw in his past as a Democrat, when he attended the Democratic National Convention that nominated then-Sen. Barack Obama for president and considered running as a Democrat for Congress in 2010.

“Eric Greitens is an abuser, a blackmailer, and less than 10 years ago — a Democrat,” Hartzler said. “There is no basement too low for him to cover up his past Obama support and blindfold Missourians into believing he represents their values. To be clear: The only RINO featured in Eric Greitens’ web video is himself.”

Attorney General Eric Schmitt’s campaign did not respond to inquiries from The Independent.

The reaction from many other prominent Republicans was also harshly negative.

Tim Garrison, appointed by then-President Donald Trump in 2018 as U.S. Attorney for the Western District of Missouri, wrote on Twitter that Greitens was fishing for news stories, and to perhaps be banned from Twitter, for “his latest bonkers ad for promoting violence…It’s completely intentional. The grotesqueness is a feature, not a bug.”

Violent imagery has been a part of Greitens political persona since he began running for office as a Republican. In his 2016 campaign for governor, he produced an ad showing him firing a large-caliber automatic weapon as the announcer says “when he fights back, he brings out the big guns.”

And in April 2021, before a gathering of Republicans in Macon, Greitens said his supporters have “bar fight intensity.”

In a statement to The Independent, Greitens campaign manager Dylan Johnson said foes are taking the video too literally.

“If anyone doesn’t get the metaphor, they are either lying or dumb,” Johnson wrote in an email.

The RINO insult has been around for decades but its use has reached a new level in recent years. Trump uses it to describe any Republican who disagrees with him. Greitens has joined Trump in applying it to Senate Republican Leader Mitch McConnell and that is also his label for his primary rivals.

Its use in almost every intramural fight means Republicans have abandoned what President Ronald Reagan called the “11th Commandment” for GOP politics: “Thou shalt not speak ill of another Republican.”

This weekend at the Texas Republican Convention, fighting and shoving broke out between a group of protesters and U.S. Rep. Dan Crenshaw and staff where Crenshaw was called a “globalist RINO” and “Eye-patch McCain.” Crenshaw lost his eye while in the military in Afghanistan.

On Sunday, U.S. Rep. Adam Kinzinger of Illinois, one of two Republicans serving on the House committee investigating the Jan. 6 insurrection, said he received a letter at his home threatening “to execute me, as well as my wife and 5-month-old child.”

While many of the comments on Twitter condemned the violent imagery, it drew applause from a few.

“Eric isn’t calling for ‘violence’ against RINOs,” wrote Alex Bruesewitz, CEO of the conservative media consulting firm X Strategies. “He’s saying we need to vote them the hell out of office. I agree!”

One of the Democratic candidates, Lucas Kunce, piggybacked on the strong reaction to Greitens’ video by sending out his own fundraising appeal.

“Terrorists, child abusers, and criminals like Eric Greitens shouldn’t even be able to get a weapon,” Kunce wrote in his message to supporters. “He belongs in prison — not the U.S. Senate.”

Another prominent Democratic candidate, Trudy Busch Valentine, said in a statement that the video is “despicable.”