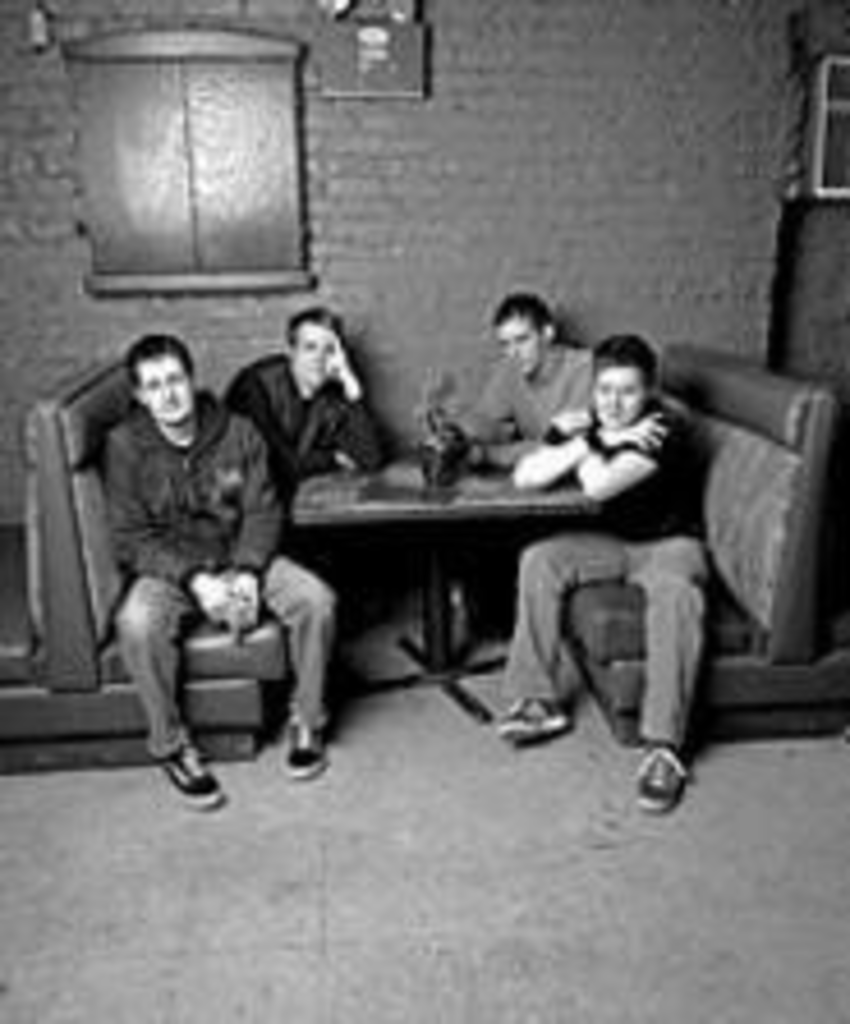 This is a scrapbook that I started keeping,” Todd Bell explains to the video camera.

Bell is sitting at a kitchen table, thumbing through pages with the kind of unfettered nostalgia usually reserved for high school football stories or John Mellencamp tunes.

His old buddies are gathered around, pointing at the pictures. “That’s me, Todd, Pete … “

A minute later, the footage on Killing a Camera, the recently released Braid DVD, revisits those glory days. Four sweat-soaked dudes scream and flail through rocking anthems under the magnanimous lights of a Chicago club. The August 1999 show is inspiring and intense, and it seems, at least for one August night 5 years ago, that Braid is the most important band on the planet.

But when the film flashes to 2004 and reveals the band members to be a little older, balder and rounder, it’s obviously a different time, a different place. Drummer Damian Atkinson and bassist Todd Bell reminisce. Singing guitarists Chris Broach and Bob Nanna reflect on the poignancy of their rock. In short, they tell you that they were the most important band on the planet.

Braid is considered a forefather of the strain of postpunk called emo. (Maybe you’ve heard of it.) In the mid-’90s, bands like Braid, Cap’n Jazz, and (yes) the Get Up Kids paraded the sub-subgenre into basement shows and VFW halls. The music was a lifestyle. The soundtrack was about nervy guilelessness and discordant guitars. The fans were about confessional blog entries and backpack straps adorned with buttons. Disciples of the movement rose from the fertile Midwest soil like so many ears of corn.

And then emo got ugly.

What was initially a brand of music whose very name implied sincere expression had morphed into slick, paint-by-numbers mall Muzak. In short, emo sold out. Today, admitting you were an emo kid is like admitting you were a candy raver. Most prefer not to talk about it.

So when Nanna gets on the other end of the phone line to discuss the band’s current reunion tour, you have to ask him: What’s it like to get credit for spawning a monster?

“I guess it is kind of flattering, but I can’t take it too seriously,” he says. “We weren’t trying to get a new genre up and running. And it wasn’t as if the term didn’t exist. We thought of all our favorite bands as emo bands … bands like Jawbox, Hoover and Lincoln that were into this challenging guitar work and personal lyrics. We were just copping that stuff … and maybe we just got it out to more people.”

But here’s the rub: Even when Braid was at the peak of its powers, the band didn’t get it out to that many people. That happened later, after the breakup. The sold-out performance of the band’s last hurrah on Killing a Camera was the exception, not the rule.

“Even though we broke up at the height of our popularity, probably most people who know Braid have gotten acquainted with our music in the last 5 years,” Nanna admits. “When we sold out the Metro [in 1999], it blew our minds. When we sold it out this time, I kind of expected it to happen.”

That’s because of young kids like Jessica, the Braidiac from New Jersey whose profile can be found on Braid’s fan page (http://carouselandsold.com). Jessica is a member of Braided, an online chat community of about 200 fans in more than 50 countries dedicated to Braid. The average age is 19. Jessica’s favorite songs are “Capricorn” and “Hugs From Boys,” which were recorded when she was 6 years old.

How does a band get big with the kids after it breaks up? Nanna credits lip service from Braid disciples, including fans of his new project, Hey Mercedes, which he started with three Braid members. (Black sheep Chris Broach went on to form the Firebird Band.)

“Someone will introduce someone else to Hey Mercedes,” Nanna explains. “They’ll say that we were all in Braid and we started the whole emo thing, and that person will get interested in the old stuff.”

The record sales prove it. Braid’s final proper release, Frame and Canvas, has sold more than 16,000 copies, bettering the most recent Hey Mercedes full-length, Loses Control, by about three grand.

But in 2004, the “emo thing” that Nanna helped father with Braid has a different flavor. Today, emo bands don’t play basements; they ink big-time record deals and shoulder expectations to be the next sensitive superstars who can bring in the crossover cash, like Jimmy Eat World or Dashboard Confessional.

“Today the scene of bands is not about what we were about,” Nanna says. “Newer bands aren’t concerned with playing basements. They want to be immediately playing to a lot of people and MTV and sponsors. It’s unfortunate. If I could talk to some of these bands, I’d tell them to go play some shows. That whole idea of the five-dollar basement show is dying.”

But don’t expect that the Braid reunion necessarily will bring those traditions back from the grave. Braid circa 2004 takes more cues from the fiscal-minded purveyors of emo nuevo than the DIY innocence of yore. Several shows on this reunion tour have sold out, even though tickets for Braid’s stop at The Granada (available through, ahem, Ticketmaster) are $12, not $5.

“A lot of things have changed since we started up 10 years ago, but a lot is just the same,” Nanna says. “We’ve played 537 shows, and half of them I could tell stories about something cool or interesting that happened. A lot of the old-school fans don’t come to shows anymore, but there are newer fans. And it’s good to play these old songs to new people, to share the experience of what we were trying to do back then and see how it still affects people today.”