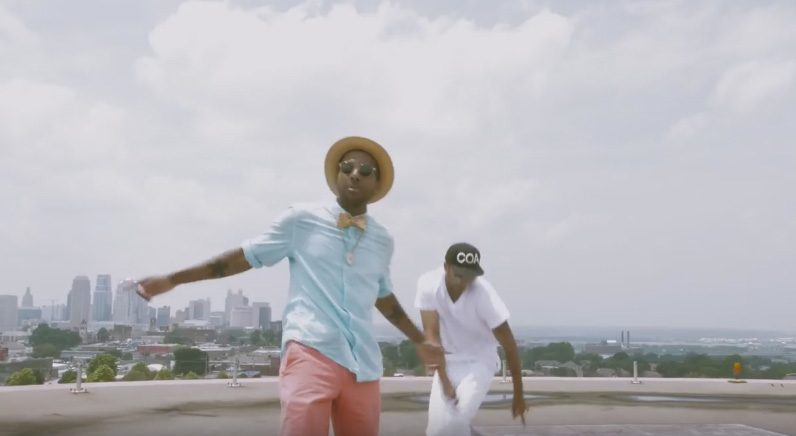 There are some gorgeous videos being done in Kansas City and Lawrence these days. Be it live footage by Radkey, the sunny swagger of Kemet the Phantom, or the revisitation of childhood via Bonzo Madrid and Heidi Lynn Gluck, there’s plenty of visual style to go around in this month’s Cine Local.

While we’re waiting for Emmaline Twist to drop its first “official” video for “Vega,” this rather excellent live video from the Outer Reaches festival at RecordBar will do nicely. Despite the folks who stand right in front of the camera for the last minute or so, the visuals projected behind the group give this performance some hallucinatory appeal. The rather new band plays post-punk-influenced psychedelic rock with an angular edge — like Interpol, had that outfit listened to more Wire than Joy Division. Props to Meredith McGrade for finally getting to front a band, after backup duties in Morningglories and Admiral of the Red.

After several years of releasing its punk-influenced hard rock on its own Little Man Records, Radkey finally signed to a label. At the end of September, the trio of brothers announced a deal with Another Century, which is re-releasing the band’s full-length, Dark Black Makeup, under the new name of Delicious Rock Noise. That version of the album — with bonus tracks “Marvel” and a cover of the Teen Titans theme — is out November 11. This video for “Dark Black Makeup” is just live performance footage synched to the studio version of the track, but it captures Radkey’s energy in a serious way. The VHS-degradation effects laid on top of it look pretty sweet, and do a nice job of tying in to the band’s new T-shirt, which is damned clever.

Setting the opening lines of “Suite Life” against the imagery of the show palace which is the Kauffman Center for the Performing Arts is kind of a master stroke in terms of getting a point across. Kemet and Kyle James live it up on the helipad of a downtown building while the beat unwinds behind them. It’s contrasted by the darkening of the beat and a cemetery setting when James’ bars come up, and cheers back up when the Phantom returns with the refrain. It’s a solid track to promote Kemet the Phantom’s upcoming The Invisible Man album. Additionally, the sunny-hazed visual aspect of the video makes the Midwest look like California, thanks to some ace direction by Celestial Pictures’ Will Harrah.

The video for “GFM,” the second single from Crabtree’s upcoming EP, The Edge of the Sky, is a minimalist affair. It features Crabtree’s face, singing behind a pane of glass speckled and streaked by rain. The simplicity allows Crabtree to focus on expression, and allows the viewer to interpret the song’s words. If you want to hear it all live, The Edge of the Sky releases on November 30 at the Uptown Arts Bar, with Crabtree and his band, the Transcendents, playing it live.

Heidi Lynn Gluck’s debut full-length, Pony Show, came out at the end of the summer on Lawrence’s Lotuspool Records, and the wonderful songs on it are some of the best music I’ve heard in ages. The melodies are clean and crisp, and Gluck’s voice is just the sort of thing to catch your attention and never let go. The baroque pop of “Better Homes & Gardens” is perfectly matched by the ’70s-dinner-party vibe of W. Dave Keith’s video, which portrays Gluck as the little girl who finds joy, despite being ignored by all the adults. Set against lyrics like This emptiness swallowed me up like a wave, it sees Gluck the younger breaking free of the wrong side of the cage.

The title track to Berwanger’s new full-length, out this Friday from Doghouse Records, is just about the biggest-sounding thing on the album, so it’s unsurprising that the song gets the big video treatment. A trio of people walk unsuspectingly into a haunted house, and Berwanger’s keyboardist, Brian Klein, gets the crap smacked out of him by skeletons while the two women are terrorized by disembodied heads and more. It’s a perfect combination of Berwanger’s love of horror movies and the band’s Cheap Trick riffs and hooks.

Bonzo Madrid, “All You Got”

Also out this Friday is Worry, the debut from Lawrence’s Bonzo Madrid. Big, skittering beats anchor the soulful vocals of CJ Calhoun (formerly of Cowboy indian Bear) on this lead-off track. Micki Hadley’s video starts out looking wistfully throwback, but quickly gets into the darkness of what kids can do. Appropriately enough, all the proceeds from the album’s first month of sales will be donated to the Lawrence arts organization Van Go.