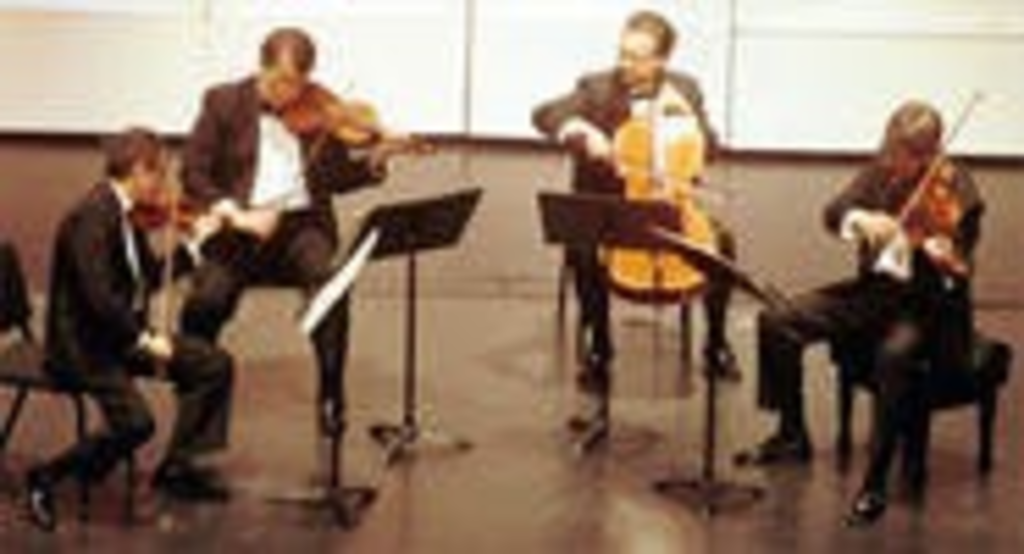 Only six weeks after an intense performance series during which the Emerson String Quartet performed all 15 Shostakovich string quartets over five concerts, its show in Lawrence could be perceived as a group slumming. As though coming down off a Russian high, the quartet kept Shostakovich’s Tenth Quartet, in A-flat major, as the centerpiece, but rose to it with a less rigorous piece, Haydn’s Quartet in E-flat major, Op. 33, No. 2. The two worked better in tandem than expected; the quartet used the Haydn to warm the audience up without losing the element of surprise brought on by the Shostakovich. (In fact, the Haydn, subtitled the “Joke,” has its own surprise with false endings that are the classical equivalent of birthday candles you can’t blow out.)

As good as the Haydn was, and as effective as the dénouement turned out to be (Debussy’s Quartet in G minor), the Shostakovich made the concert an event. Already a work of spiritual force, the Emersons’ interpretation of No. 10 emerged as a searingly persuasive sermon. Cellist David Finckel in particular found the mesmeric center of the work and never surfaced; it was hard to watch anyone else. Violinists Eugene Drucker and Philip Setzer seemed less elated, but no less focused. With violist Lawrence Dutton, the quartet would have been worth watching even if no sound came from their instruments, such was the balletic precision of their playing. The occasional moment out of tune failed to hurt the presentation.

In fact, the Emersons, who have been playing and recording together for 25 years, brought some needed rock and roll spontaneity, including turns into tonal difficulty, to the Lied Center series. The success of their program, a jigsawed trio of seemingly incompatible works, proved that a repertoire as broad as theirs deserves latitude. The quartet is probably the most convincing challenger of the popular notion that chamber music must be airless and starched. The Emersons were vigorous without being stern, and showed a raw energy more easily associated with an A-list rock act. That seems odd until you consider the necessarily instantaneous kick of a piece written for four musicians compared to a full symphony. The Emersons thrived on that difference Saturday. And like a rock band, they were even courted for an encore, which they delivered with a movement from Shostakovich’s Third Quartet.