Elvis makes an appearance at the Blue Gallery 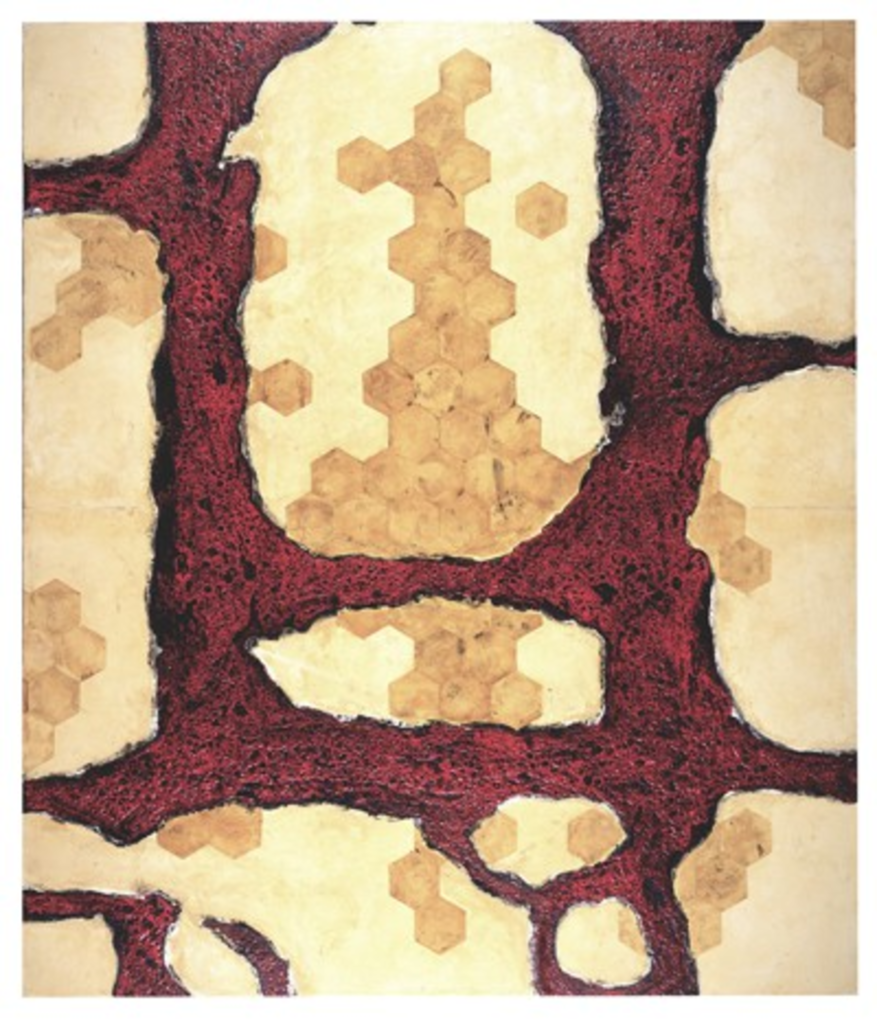 Elvis is in the building.

Or at least his coat is, through the work of Peter Warren, one of three artists in the Blue Gallery’s current exhibition.

Warren is a transplant from Brooklyn who embraces a recycling aesthetic. His stable of materials includes champagne-bottle wire, fertilizer bags, lottery tickets and a host of other detritus. His pièce de résistance here must be the full-sized Elvis coat sewn (except for its velvet lapels) from unscratched, Elvis-themed lottery tickets. Mechanized to slowly turn, it hangs in a wire cage.

Displayed on other small stands are more such coats constructed from lottery tickets, New York City parking tickets and other found materials. But garments, miniature and monumental, assembled from alternative textiles, have been addressed a lot over the past 10 years by many contemporary artists, making Warren’s seem dated.

Warren also shows small, wall-mounted sculptures that look like tiny cities or apartment buildings. “As above, so below” is made from salvaged plywood, organ bellows, champagne-bottle wire, and found wood from a “Late Night” sign. These quirky little villages have an innocent and endearing quality to them, underlined by their simplicity and sparse aesthetic.

Warren shares the space with two other artists, whose works are aesthetically unrelated but combine for a reasonable exhibition.

Brooklyn artist John McGarity works with acrylic, conté and press type to make paintings that are hybridized arenas of geometry, nature and spatial relationships. Essentially using a simple red, black and muted-yellow palette, McGarity achieves a multilevel dialogue. He creates a bubbly effect in the red and black areas, adding a dense (sometimes distracting) viscosity to the paint that contrasts with flat areas of yellow. “The Red Series, Untitled No. 20” suggests a fence of some sort, through which we view a shallow red stripe of textured pigment. In some of McGarity’s paintings, the highly textured surface of the red and black gives the work a macabre sensibility — the red can look bloody or like bone marrow.

McGarity notes, in his artist’s statement, that geometry, numbers, text and line work “provide the detail components that refer to the scientific and mathe­matical symbols we use to make sense of our environment and our place within it.” In “The Red Series, Untitled No. 13,” he contrasts the textured red surfaces with the yellow background into which he has created hexagonal shapes, fostering a honeycomb effect that resembles cells or other biological images.

Finally, Louisiana native and resident Rachel Stuart-Haas, a graduate of the Kansas City Art Institute, offers paintings of a young woman in various scenes and poses. Stuart-Haas writes that the paintings “portray my intuition toward the obvious and the ethereal … I like to imagine that each of these pieces captures both reality and mystery via the subject’s ability to exist in both worlds at once.” In “Beacon,” a girl sits in a fictional “forest” of thin trees with pink and red flowers, holding a bird that glows in an aura. The works dance a slender and tricky line between deliberately naïve and completely childlike.