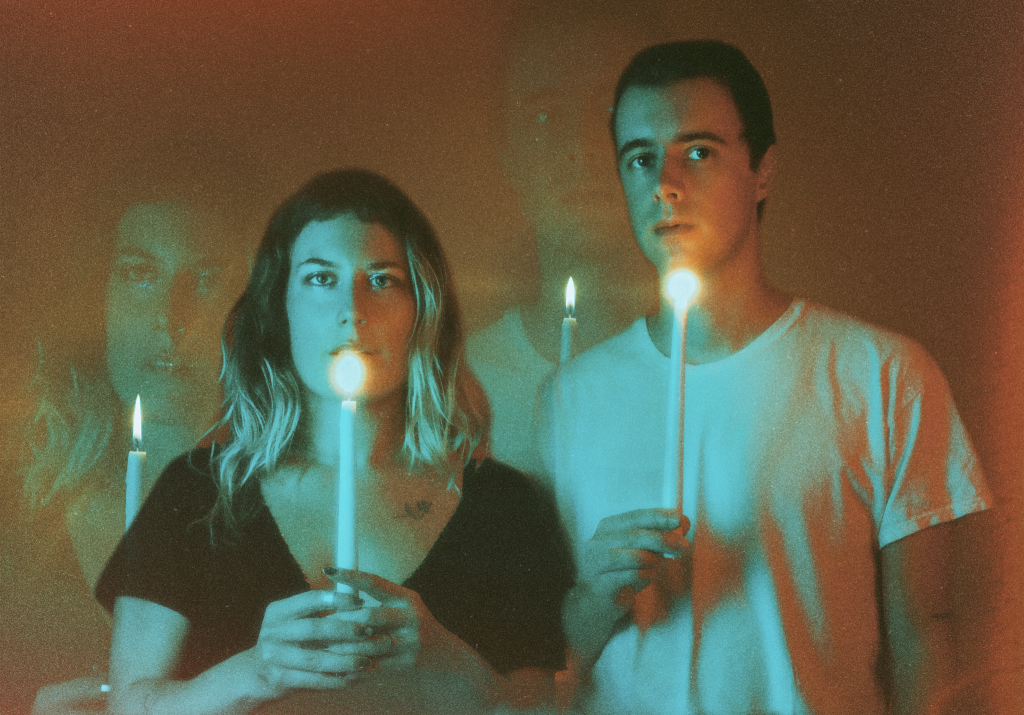 Boy Harsher, most known for their amorphous darkwave and new industrial sound, has been creating devilishly danceable music for over eight years. Since the band’s 2014 hit “Pain” off their Lesser Man EP, Boy Harsher has represented universal human experiences through raw lyrics and brooding electronic beats.

The Northampton duo, composed of vocalist/lyricist Jae Matthews and producer Augustus Muller, have recently leveled up their gothic creativity with the release of their album and short horror film, The Runner. Sonically balancing pop and cinematic instrumentals alongside uninhibited graphics, this multi-media piece vividly depicts the urge to escape life’s darker desires.

Now on a world tour for their album, The Runner (Original Soundtrack), we hopped on the phone with Jae and Augustus of Boy Harsher to discuss this and more ahead of their show at the RecordBar on July 25.

The Pitch: First off, congratulations on your project, The Runner. In a few sentences, how would you describe the film?

Augustus Muller: It’s a multimedia project. It’s us. We wrote an album and needed a way to give it a story because we felt the album itself needed some extra context. We wrote a film for the album.

You both have a background in film. Has working on a film been an individual goal for both of you?

Muller: Yeah, I don’t think we would have been able to do it or justify it if it wasn’t for a COVID break. It was an interesting time for us to take a break from touring and be able to have the time to make a film.

In the soundtrack release, you collaborated with a couple of other artists. Was this a newer experience? How did this compare to working as a duo?

Muller: Yeah, it was interesting. I think it’s important to point out that the album was written during COVID, so it was a pretty bleak, depressing, and really hard time for me to be creative. Reaching out to friends to collaborate with was a way to have the assignment to work on something. To give us some extra motivation, we reached out to people we were very comfortable with.

One of your collaboration songs, “Autonomy (Feat. Lucy- Cooper B. Handy)”, was a notably upbeat track. What inspired the sound of this song, and do you plan on using this cheerful tone in future projects?

Muller: I think I’ve always had that- songs with instrumentals and that [upbeat] vibe. I have an archive of these forgotten happy-sad songs, and with Cooper, this [sound] just clicked quickly. It’s upbeat, but it has this melancholy color that I felt resonated with Boy Harsher.

Jae Matthews: I mean, I can’t wait for this archive to be explored.

Are you incorporating visual elements in the live performances of The Runner (Original Soundtrack) on tour?

Muller: We’re not, no. For some of the shows, we’re lucky enough to have a screen attached to them. But now it’s just the live sets, which is a separate world compared to our recorded music.

Matthews: Yeah, I mean, the live shows in themselves are such an intimate and specific type of experience that it wouldn’t necessitate any additional videos or anything. We want it to be its own singular thing.

Your duo started with Jae performing spoken word pieces to Augustus’s musical backing. Jae, did you realize you had such a powerful voice before you started working together?

Matthews: Oh, no. I mean, I don’t know if I consider it a powerful voice. When we started doing anything [performing], I had severe stage fright. I would kneel on the ground and try to be as hidden as possible. But I think somewhere along there, we had to realize that you have to at least put on a good performance, and it’s a little bit of acting. I’ve always wanted to be a storyteller, so maybe that desire has somehow been filled with playing songs live.

When you write your word pieces, do you write with the intent to sing them? Is this still how you create lyrics?

Matthews: No, it’s way different now. When we began, I was pulling segments from written pieces and trying to find what was poignant within the text because reading text out loud can get super-boring. But now, we’re constructing how we like to live in that song and figuring out what feeling that song is evoking. So based on that, I’ll try to generate some type of narrative or expand upon the atmosphere that already exists within the instrumentals.

Boy Harsher is often placed into the dark wave, minimal synth, and electropop genres. Do you resonate with these genres, or do they feel assigned?

Muller: I’ve got a flip-flop on this one. When darkwave started getting used, it was maybe a little obnoxious because it felt like Spotify branding. But now, whenever anyone wants to describe your music, they’re taking their time to listen to it and put it into a genre. I respect it.

Kansas City is known for its underground punk scene. How would you describe the music scene in Northampton [Massachusetts], and has it influenced Boy Harsher?

Matthews: It’s funny you say that about Kansas City. I remember when we played there- sorry for the tangent, but it’s funny. We play electronic music, but they decided to combine it with a punk show; I believe it was Ukiah Drag. One of the local bands wore a t-shirt that said, “fuck computer music.” Really funny. I mean, I was like, damn cool. It’s cool to wear your ideology so on your sleeve. Regardless, it was a great show. The music scene in Western Mass — yeah, there’s a legacy here for experimental and freak folk. I’m not sure if we exist within those worlds, but it has been nice to be in a community with these small DIY shows.

Boy Harsher has been quoted as being inspired by bands such as Nico, Circuit Des Yeux, D.A.F, and Yello. Are there any modern bands that you have both recently been digging?

Matthews: I mean, this is one I’ve been preparing for a minute now just because I’m so impressed by her latest release, but I’m really into Spellling. You know, it’s rare to find a contemporary band whose recordings and live performances are both excellent and enjoyable, but that’s how I feel.

Is there anything important you’d like to share with the KC music scene that we haven’t covered?

Muller: Just a shout-out to Hiro Kone for supporting us on tour. She has amazing music and a fabulous record that came out this year.

Boy Harsher plays the RecordBar on Monday, July 25, with Hiro Kone. Details on that show are here.