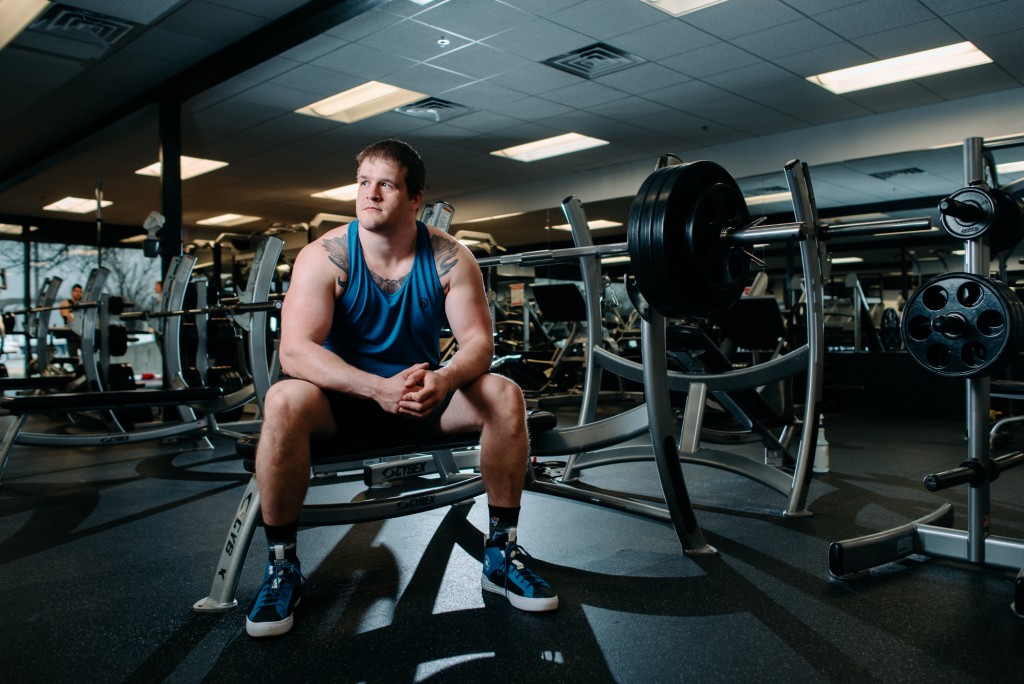 In those first pandemic months of 2020, when just about everyone was wandering around in a state of discombobulation, Ehren Schwarz was hitting his stride.

“I was averaging 70 some hours a week at work and taking 12 credit hours at school along with five or six days a week at the gym,” Schwarz says. “And I was able to come out with a 4.0 GPA, and l lost 40 pounds the healthy way.”

Later in the year, he rented his first apartment and celebrated his 26th birthday. “Oh, and I just upgraded vehicles recently,” he says, “and I got a truck I’ve been wanting since I was like freaking five years old.”

All this would add up to a good year for just about anybody. But two years ago, Schwarz was the one adrift. A former high school football and wrestling star in Nebraska, he’d blown his shot at scholarships and college sports and was living on the streets of Kansas City. He slept on park benches, looked for free food, and ingested every bit of alcohol and substances he could get his hands on.

“I was watching my life like a car accident,” Schwarz says. “It wasn’t anything I had ownership with. It was something that I was watching happen from the outside.”

Schwarz was in and out of treatment programs and hospitals a lot those days, as substances wreaked havoc with his body and mind. He was being discharged from the behavioral access center at St. Luke’s North Hospital in Smithville one day in 2018 when a staffer told him he should wait around and chat with a man named Kar Woo.

Schwarz had heard of Woo, a guy who helps people with mental illnesses and substance abuse issues. “He’s kind of like the unicorn of the mental health field,” Schwarz says. “You hear about him a lot, but you never see him. And one of the people up in Smithville told me he was coming up and I really should meet with him.” 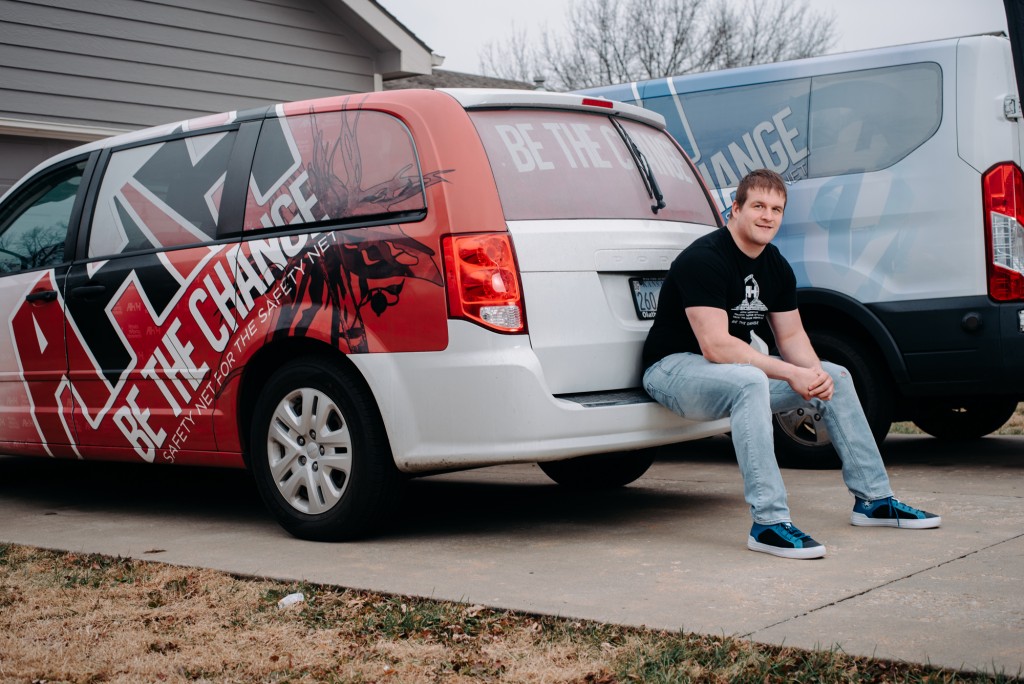 Schwarz shrugged. Why not? He had no plans or place to go. After a while a slender, long-haired Asian man sat down with him and asked, conversationally, “So what do you want to do with your life?”

Schwarz was floored. “That was the biggest shell shock for me,” he says. “Because I firmly believed that I had burned every bridge and every opportunity to have a choice in what I was wanting to do with my life. And here this energetic man comes in and asks me what I want to do. Like I have every opportunity in the world.”

Schwarz mumbled something about maybe getting a job. Woo shook his head. “What do you really want?” he asked.

Schwarz wanted to wind the clock back, to the day in 2010 when his mother—the person he loved and looked up to most in the world—was killed in a car wreck. He was 15 years old with the body of a heavyweight athlete and the heart of a wounded child. Now, almost 10 years later, he wanted to grasp hold of the values she’d instilled in him and fulfill the hopes she’d had for him.

“I want to go back to school,” he told Woo. “I want to take back the opportunity I walked away from.”

“OK,” Woo said. And that was the beginning.

Woo’s own story is legendary among the people in Kansas City and Lawrence, Kan., who work with people in crisis due to mental illness and addiction.

An immigrant from Hong Kong, he was operating an art gallery near the Country Club Plaza when he began to connect with many of the homeless people in that area. Woo had studied counseling and psychology in college, and had a way of understanding these folks. 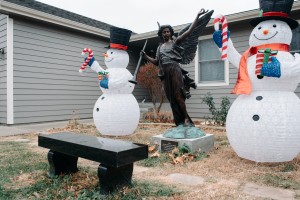 Eventually leaders at St. Luke’s Health System asked Woo if he would put his gallery business on hold and work on finding better options for people with mental illness and addictions than the hospital emergency room.

That was the beginning of Woo’s non-profit, Artists Helping the Homeless. One of its core functions is the operation of recovery houses in Kansas City and Lawrence. By the end of the day on which he met Woo, Schwarz was settled into Bodhi House in midtown Kansas City.

Schwarz had been through a number of treatment programs in the three years he spent on the streets. Most of what he learned he cast aside as soon as he was discharged. Woo’s program, he says, was different.

Woo instructed Schwarz to come up with a plan. Turns out, Schwarz loves plans and action steps. He badgered the Bodhi House managers with details of how he planned to spend the next day, the next week, the rest of his life. Within three weeks he was enrolled at Penn Valley Community College and had a part-time job in the campus weight room.

Schwarz thrived in the structure and camaraderie of Bodhi House. But after a couple of months, when Woo proposed that he move to a supervised apartment building operated by Artists Helping the Homeless, he panicked.

“This is too much,” he recalls telling Woo. “I can’t handle school and moving. I’m an addict, you know, and this and that.”

“OK,” Woo said, serenely. “I’ll just keep believing in you until you believe in yourself.”

So Schwarz moved to the apartments. After a bit, the weekend overnight supervisor’s job opened up. Schwarz asked Woo if he could try it out on a volunteer basis. He quickly earned a spot on the payroll. 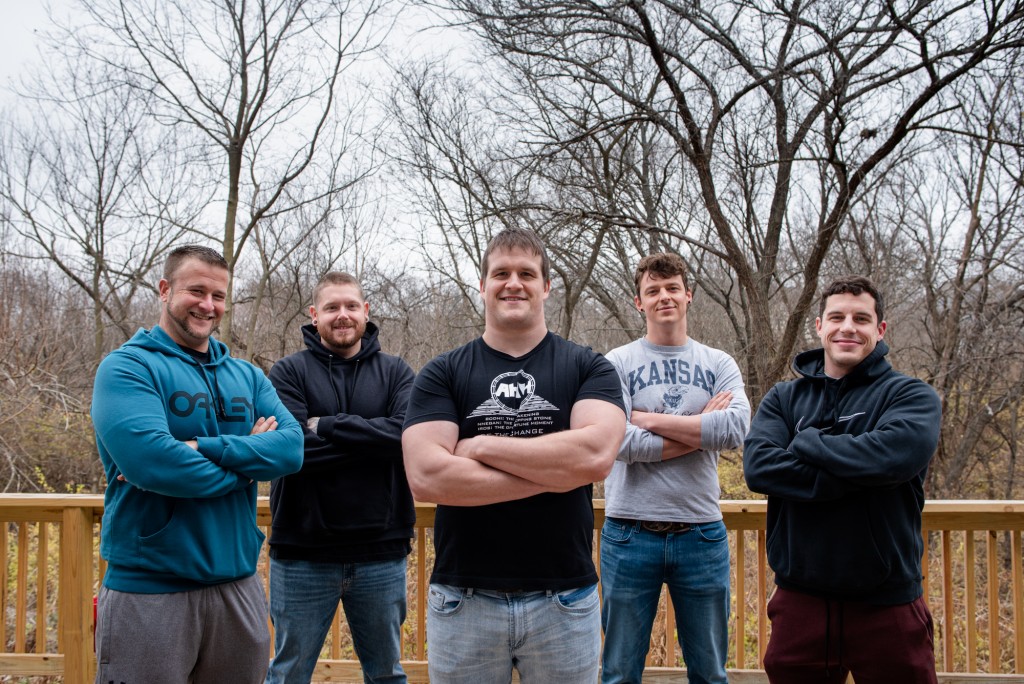 One thing led to another and Woo asked Schwarz to help him open up a new recovery house in Lawrence. They found and purchased a duplex and began admitting clients. Schwarz enrolled at the University of Kansas to study business management and leadership.

“His story is very wonderful because he really is trying to do everything right,” says Woo. “He’s taking little steps at a time.”

But Woo and Schwarz both know, better than most, that success among addicts is measured minute by minute. Woo has seen many clients thrive and then fall.

“I had one kid, he was doing really well for two years,” he said. “He moved in with his girlfriend and within a month he relapsed.”

When that happens, most clients are welcomed back into Woo’s program. He never gives up on anybody.

Schwarz has now been clean and sober for two years and four months.

“If I’m being transparent,” he says, “I haven’t made it. There’s no point of victory. I continually do the same things I did in the first 30 days of recovery. I still go to meetings. I still make my bed. I still do the dishes. I’m doing a lot better, but it’s because I’m doing the same things that got me here.”

Fitness has always been important to Schwarz, and his Facebook page shows him pulling off feats like bench pressing 315 pounds. 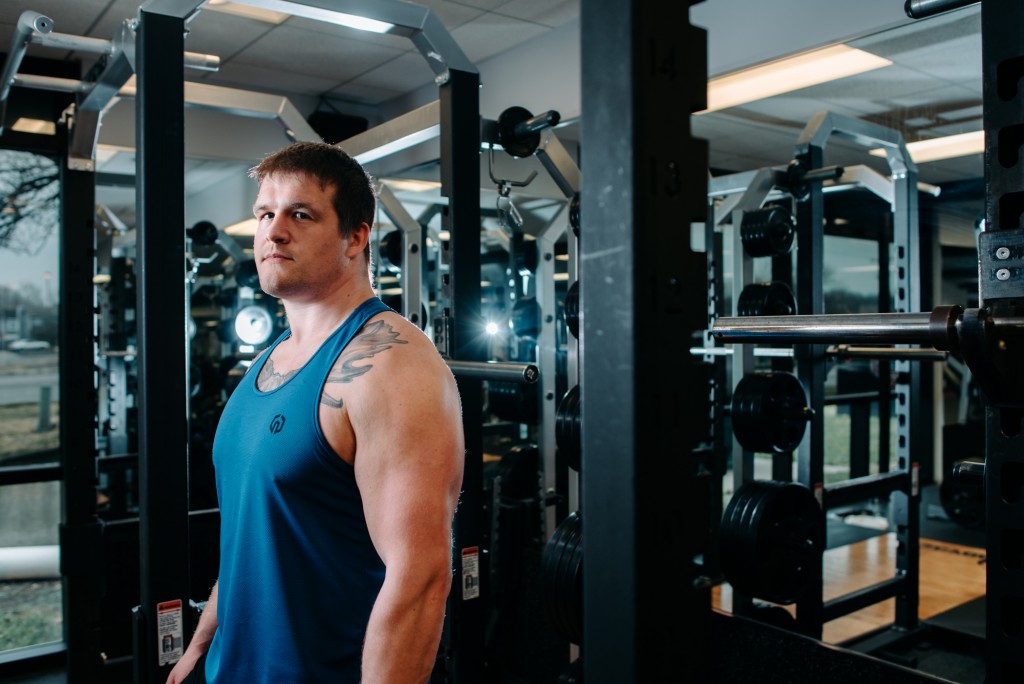 His recent trappings of success, like that four-wheel drive truck he bought without taking out any loans, might be a sign to others of how far he’s come since the days he stumbled around Kansas City with nothing but a change of clothes and a backpack. But Schwarz knows not to let them define him.

“Stuff is just stuff,” he says. “These are the easy things for people to see the growth, but what they can’t see is the growth inside me. Like, I do not recognize myself today.”

More rewarding than his job, his grades and any possessions he’s acquired is his reconciliation with his father and two brothers. 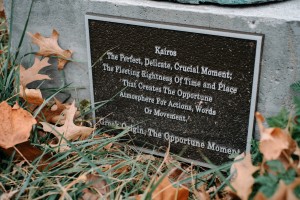 “They always loved me, but they had to love me from a distance,” Schwarz says, remembering the alienation he felt when he was homeless. “But now it’s to the point where I actually get phone calls from my brothers asking for advice.”

Schwarz has even embraced a sister he never knew existed before she got in touch recently after tracing her family online.

In a season in which despondency looms for many, Schwarz thinks often about how his story can help create hope.

“To me hope is the precursor to faith,” he says. “And in order to have faith in myself, I must first have hope that I can do something.”

Schwarz loves inspirational books, videos, and slogans, so he pulls one out now. “I always use the quote, ‘Be the light you wish to see in the world,’ It’s like trying to find your way out of a dark room, you’ve got to have some sort of light, some sort of belief. I’ve been where there is no light in the room. And today I do my best to be that light in the room for the next individual.”